Concluding this month's Q&As with our January authors, we have Brian Kirk. He talks about what inspired him to write the book, why his characters are so realistic and what scares him the most!

Tell us about your novel, We Are Monsters?

We Are Monsters is a story about a brilliant, yet troubled psychiatrist named Alex Drexler who is working to create a cure for schizophrenia. At first, the drug he creates shows great promise in alleviating his patient’s symptoms. It appears to return schizophrenics to their former selves. But (as you may imagine) something goes wrong. Unforeseen side effects begin to emerge, forcing prior traumas to the surface, setting inner demons free. His medicine may help heal the schizophrenic mind, but it also expands it, and the monsters it releases could be more dangerous than the disease.

What inspired this story?

I’ve always been fascinated by mental illness. The idea that our own brains can turn against us is terrifying. It’s the ultimate enemy; it knows our deepest secrets and it’s something we can’t escape.

I also have a great deal of sympathy for people who suffer mental health disorders. I’ve dealt with OCD all of my life, which produces chronic anxiety, negative thought loops, and periods of depression. No fun, I’ll tell you. And I feel that mental disease is misunderstood by our society at large. In fact, many people who are mentally ill are often labeled as evil or deranged, which I feel is unfair, and precludes us from exploring proper treatment options.

I suppose I found the subject both fascinating and deeply personal, and I wanted to explore it further, so I wrote about it.

Was there much of a balancing act for you in portraying mental illness as accurately and considerately as you can and still fit in the supernatural elements?

Providing an accurate portrayal of mental illness was extremely important to me. Not only in creating an authentic story with realistic characters, but in order to be respectful towards people who suffer mental disorders as well. In works of fiction, people with mental illnesses are often depicted as circus freaks. They’re “INSANE!” Almost like a different species of human completely unrelatable to the rest of us.
I conducted research to get a basic understanding of the various traits common to many mental disorders and what type of behaviors and speech patterns are associated with certain illnesses. I read books written by psychologists as well as those written by people suffering from psychoses such as schizophrenia. I needed to understand the disease from the patient’s point-of-view. I also visited a mental institution and interviewed people who worked there. Many readers have commented on how realistic the characters seemed, so I suppose the research paid off.

The supernatural elements in the story are really presented through the perceptual lens of the characters, so as long as I established the ground rules for the world and the psyches through which these elements manifested, I felt like the reader would follow along. Even with the more abstract elements, as the psychotic mind (along with the subconscious one) often speaks in abstract terms.

We Are Monsters was nominated for a Bram Stoker Award® for Superior Fiction in a First Novel, and optioned for film development by a major Hollywood executive producer. Not bad for a debut. Were you surprised?

Yes, absolutely! My goal in writing We Are Monsters was simply to learn how to write a novel. I had written a bunch of short fiction, and published several pieces, but this was my first novel-length piece of work and I figured it would wind up in a trunk somewhere. I was surprised by how complete the first draft felt, and gained confidence through subsequent revisions. The enthusiastic response I got back from beta-readers made me realize I might actually have something. Still, I never expected the book to achieve the level of success and accolades it has earned, and the passionate readership it continues to receive. I feel very fortunate and blessed.

We Are Monsters is described as psychological horror. What do you think good horror/dark literature should achieve?

Regardless of genre, my favorite stories are those that expand my idea of what’s possible and help me better relate to my predicament on this enigmatic planet.

When it comes to horror, I gravitate towards stories that make me feel vulnerable in some vital way. As humans, we construct these elaborate fantasies designed to make us feel safe. Governments, religions, borders, pension plans. We don’t like to face the fact that we’re all hurtling toward some unfathomable death that could come at any moment. But I find beauty in that stark confrontation. It’s what awakens me to the present moment and the magic of our existence.

You can’t have light without dark. There is no beauty without heartbreak. My goal in writing is to explore the inextricable duality between light and dark, to shine a compassionate eye on the evils that breed heroism, and to expose the howling void that surrounds us all.

What scares you most? Why? How do your personal fears manifest in your writing?

The thing that scares me the most is the thing I work hardest to accomplish, which is the collapse of my own personal identity. This includes both how I view myself, and how I view my place in the world.

I am horrified to think that one day my core identity will be stripped away and/or that certain perceived talents which help construct my sense of purpose will be diminished.

I’m frightened to think that the people closest to me may change in such dramatic ways as to sever the relationships I hold most dear.

I am terrified to think that I am nothing more than a mistake of random evolution and that nothing I think or do has any importance or permanence whatsoever.

So I work very hard to lose my attachment to all of these thought structures and free myself from the fear they bring. These are all themes I tend to explore through my writing.

Thank you to Brian for taking the time to talk today about We are Monsters. You can pick up this new FLAME TREE PRESS edition of his book, along with the other January release now. It will be available in paperback, hardback and ebook. Check out our website for details. 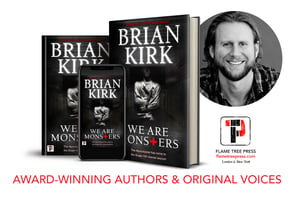 Brian Kirk is an author of dark thrillers and psychological suspense. His debut novel, We Are Monsters, was released in July 2015 and was nominated for a Bram Stoker Award® for Superior Achievement in a First Novel.
His short fiction has been published in many notable magazines and anthologies. Most recently, Gutted: Beautiful Horror Stories and Behold! Oddities, Curiosities and Undefinable Wonders, where his work appears alongside multiple New York Times bestselling authors, and received an honorable mention in Ellen Datlow’s Best Horror of the Year compilation.
During the day, Brian works as a freelance marketing and creative consultant. His experience working on large, integrated advertising campaigns for international companies has helped him build an effective author platform, and makes him a strong marketing ally for his publishing partners. In addition, Brian has an eye for emerging media trends and an ability to integrate storytelling into new technologies and platforms.
While he’s worked to make this bio sound as impressive as possible, he’s actually a rather humble guy who believes in hard work and big dreams. Feel free to connect with him through one of the following channels. Don’t worry, he only kills his characters.
Bram Stoker Award Nominee: Superior Achievement in a First Novel - 2015