In the fast paced world of the twenty-first century, more and more people can’t (or won’t) find time to read in the conventional sense. Luckily, more authors are responding to that with some imaginative new mediums. Now reading a story can be as easy as checking your Twitter newsfeed, the latest being David Mitchell’s 280-tweet short story, ‘The Right Sort’ currently being posted on his Twitter page.

If you’ve ever been in a writing class, there had to be a time or two a story started with one sentence written by one student and passed around the class until it evolved out of control. Twitter, with its 140-character limitations, is a bit like those messy, ever-growing stories. With snapshots of lives, Twitter offers a new way to understand people unlike anything before.

Is it any surprise creative minds saw that powerful quality and were inspired by it? Turning innocent tweets into a narrative has been tested out quite a few times in the past few years, even sparking a Twitter Fiction Festival where authors and users alike use the 140-character medium to tell a story. In 2012, Jennifer Egan was one of the first to start experimenting with a long-form story in tweets. Writing practically line by line, Twitter reduces the story, allowing readers to focus on each line on its own. Then Elliott Holt tried her hand at the form, using hashtags to get readers literally involved with the story.

The form continues to change as now David Mitchell is jumping in with a 280-tweet short story called ‘The Right Sort.’ Based on a boy’s experience after taking his mother’s Valium, Mitchell decided on this plotline because being on Valium reduces the world to bursts and pulses, thus lending itself easily to the Twitter form. He decided that this makes the narrative sound like it belongs on Twitter, while also hopefully avoiding the feeling of a gimmick, which it is in part. Mitchell’s sixth novel is coming out this September and ‘The Right Sort’ is set in the same universe, giving eager fans a sneak preview of the setting.

Already familiar with supernatural space, the Cloud Atlas author is hoping the Valium-induced story will also follow in the footsteps of classic literature, referencing The Turn of the Screw as an influence. Heightening the lingering is-this-real question, the story is posted in 20-tweet spurts twice a day for the next week, starting yesterday. To judge whether it fails or succeeds, we’ll have to wait until the conclusion, but Mitchell isn’t too worried about that, as he’s enjoyed the process. He’s said that ‘once the idea that I could use Twitter as a storytelling medium bit me, it wouldn’t leave me alone.’ 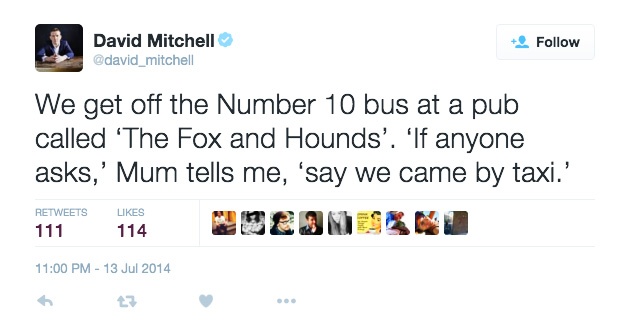 Mitchell isn’t naive about the difficulties of using the Twitter form. When asked about writing in the medium, he described it as a ‘diabolical treble-strapped textual straitjacket'. He goes on to question the visual effect of Twitter. In printed form, the shape of the text can sometimes inform the reader, allowing them to read or scan the text however they will. On Twitter though, every line stands on its own, each sentence having to be carefully thought out both visually and in context. Other limitations include the most obvious.

Twitter is designed to keep users up-to-date with the lives and muses of their friends, favourite celebrities and the like. The profile pages are set up to have the newest content at the top but with stories like Mitchell’s, Holt’s and Egan’s it can lead to some confusion if users aren’t aware of what’s happening. Other concerns lead back to the 140-character limitation; for example, because of this restriction, an author doesn’t have as much freedom with word choice, so creativity and style can be compromised. But Mitchell is not letting that stop him – let’s see how he does!

Storytelling is just one of the many ways users can interact with Twitter. A fantastic professional and social tool, it can sometimes be daunting to get starting. Whether you want to write a 140 character story, or just communicate with your friends, our book 'Everyday Twitter: Made Easy' (ISBN: 9781783612345) is a great place to start.

Check it out on Amazon here.

Opener image via the Guardian.