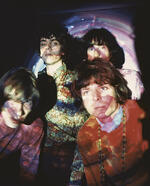 From the London club's opening night, Pink Floyd were the house band. Though little known at the time, the band started adding to the already well established American psychedelic scene by performing their tracks in new ways: with open ended jams, using echo effects and slide guitar; mesmerising the audience.

They were soon enough signed by EMI and despite early success Floyd were keen to distance themselves from their growing reputation as 'space rockers'. They turned to long time artistic collaborator Storm Thorgerson for help, briefing him to create 'something plain'. Inspired by Andy Warhol's Cow Wallpaper he promptly took a photo of a cow in a field in an attempt to help the band achieve their goal. The result was strange but did achieve the desired result, meanwhile making a bovine superstar out of the model, Lulubelle III.

Pink Floyd enjoyed lacing their performances with surrealism. The single 'Arnold Layne' (at first thought to be a 'sell out' by devoted UFO club fans) featured a celestial organ solo, and, when performing, the band would dress in eccentric designs from exotic shirts to candy cane patterns. The video in itself was artistically distinct from the norm too. It showed the band frolicking on a beach, miming to the track whilst dressed in ostentacious clothing, carrying with them a store-front mannequin, which somehow seemed obscene in its nakedness.

This lead to EMI releasing a statement reading 'Pink Floyd… are not trying to create hallucinatory effects on their audiences.' 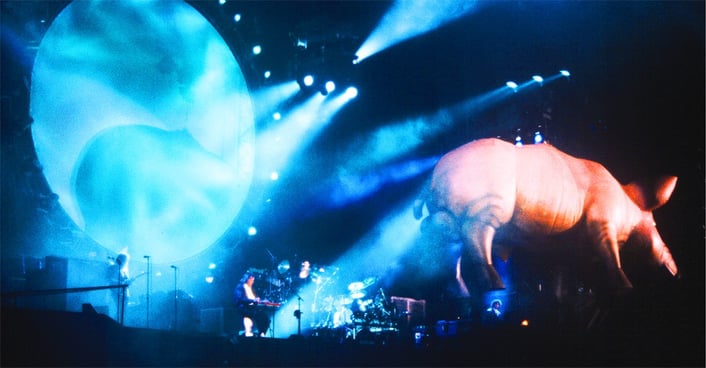 Dark Side of the Moon

The album cover for Dark Side of the Moon is one of the most iconic of all time. Once again the band teamed up with Storm Thorgerson as well as Aubery Powell who wanted to convey Floyd's light show infamy. It is also claimed that Roger Waters wanted a sleeve that reflected ‘madness of ambition’, and that the triangle is the symbol for ambition. The spectrum runs throughout the inner sleeve, tracing a heartbeat’s sonar wave.

The track was performed live with typical bombastic flair. A large inflatable was used to resemble the moon and then special effects helped to evolve it into a flaming gong before an aeroplane 'crashed' during the second half of the show. Such energy and artistic specificity was intended to convey the themes of the album, such as paranoia, schizophrenia and the overall pressures of modern day life.

However, in striving to fulfill growing artistic aspirations, Waters in particular became jaded. When dragging around generators, projectors and inflatables for their world tour, he was frustrated that the larger audiences were unwilling to quietly contemplate the finer details of the band's art. Waters harnessed these feelings to go on to develop The Wall with the rest of the band.

The band said that the album dealt with the barriers created by society and individuals, and this mantra was to be conveyed in all their representation.

Their video for the single 'Another Brick in the Wall (Part 2)', taken from The Wall, did not reveal their identities. Instead they let the surreal animation by Gerald Scarfe do the talking, alongside the striking imagery of children chanting. The intended effect was for the music to be first and foremost, therefore breaking down the barriers between artists and audiences.

'Our music is like an abstract painting. It should suggest something to each person.' - Syd Barrett.