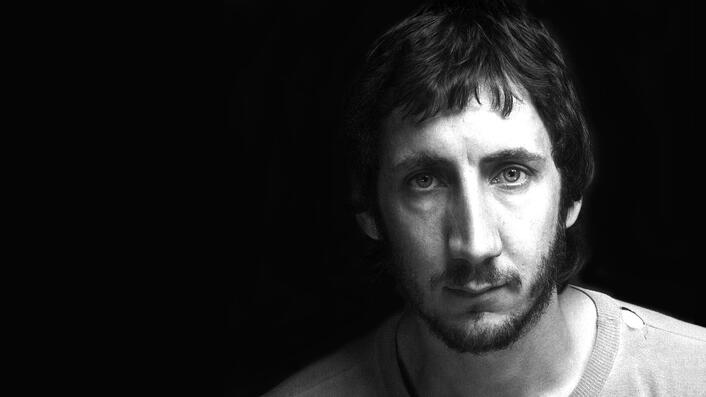 Music in the Blood

A pioneering guitarist and the principal creative force behind the Who, Pete Townshend (b. 1941) was born in Chiswick, London. The Townshends were a musical family – Pete’s grandfather was a musician, his father a dance-band saxophonist and his mother a singer. Consequently, a career in music seemed natural for Pete, and his parents encouraged him.

His first instrument was a banjo, which he played as a teenager in Dixieland outfit the Confederates with school friend John Entwistle. After leaving school he attended Ealing Art College, where the bohemian atmosphere and emphasis on the exploration of new ideas left an indelible imprint on Townshend. When bassist Entwistle joined the Detours, a rhythm and blues group fronted by singer Roger Daltrey, Townshend, who had switched to guitar at the age of 12, followed him. With the recruitment of drummer Keith Moon, the classic Who line-up was complete. 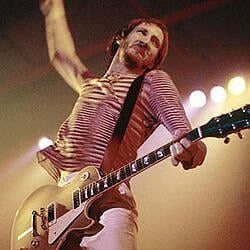 Townshend’s reputation as a destroyer of guitars began by accident in September 1964, when he broke the neck of his guitar on the low ceiling of the Railway Tavern in Harrow, and then smashed the rest of it in frustration. The routine soon became part of the act, with Moon enthusiastically joining in by destroying his drum kit. The other aspects of Townshend’s physical approach – the windmilling arm, assaults on the strings and leaps into the air – Townshend claimed to have developed to hide the fact that he could not play the blues properly.

The Who’s unique sound was unleashed on their 1965 Kinks-influenced debut single ‘I Can’t Explain’. The song’s signature riff would be widely imitated. The second single, ‘Anyway, Anyhow, Anywhere’, featured the innovative use of feedback, as Townshend nailed down the rhythm and Moon fired out short drum solos. The Who’s first album My Generation (1965) was a mix of rhythm and blues and pop, while the follow-up A Quick One (1966) was significant in that it contained in the title track Townshend’s first conceptual piece. In Britain, the Who were regarded as a singles band, and they had yet to crack America. After an uncertain year in 1968, the band released Tommy (1969), which was hailed as the first rock opera and was a major success in the United States. Live at Leeds (1970, reissued with extra tracks in 1995) captured the original line-up at its peak. Townshend’s blues riffs and solos on Mose Allison’s ‘Young Man Blues’ and his extended soloing on ‘My Generation’ are driving forces in the performances.

From Singles to Rock Opera

The Who were established as one of the 1970s’ major rock bands, and they consolidated their position with the acclaimed Who’s Next (1971) and a second rock opera Quadrophenia (1973), which looked back to the band’s mod roots. In between, Townshend made his first solo album, Who Came First (1972). Shortly after the release of Who Are You (1978), Moon died and the future of the Who was thrown into uncertainty, but the band continued with ex-Small Faces and Faces drummer Kenney Jones for two more albums.

Townshend pursued a parallel solo career, achieving notable success with Empty Glass (1980). In 1983 he declared that the Who were finished, although they reunited for occasional live performances, including Live Aid, during the 1980s. Since 1996, Townshend has worked with various incarnations of the band (not initially billed as the Who), a practice that continued after the death of Entwistle in 2002. With Daltrey, Townshend made the first new Who album in 24 years, Endless Wire (2006). The Who have continued to perform critically acclaimed sets in the twenty-first century, including the Concert For New York City (2001), Isle of Wight Festival (2004), Live 8 (2005), Glastonbury Festival (2007), the 2010 Super Bowl halftime show and the closing ceremony of the 2012 Summer Olympics in London.

Townshend’s early inspirations were John Lee Hooker, Bo Diddley, Eddie Cochran, Link Wray and Hank Marvin. His use of the guitar as a sonic tool as much as a melodic device was influential to many punk guitarists. A prime example of his powerful strumming is the intro to ‘Pinball Wizard’. In the Who’s early days he played an Emile Grimshaw SS Deluxe, plus 6- and 12-string Rickenbackers. He began using Fender Stratocasters and Telecasters, as these were less expensive to replace. From the late 1960s, he favoured Gibson guitars for live work, using a Gretsch in the studio. Since the late 1980s he has preferred the Fender Eric Clapton Stratocaster to his own signature model.

Images (in order used), via Citizen Thought and Johanna's Visions.