In the third entry to our essential listens list we have an album created full of intelligent verse, emotional depth and interesting musicality, written by a teenager. After a couple of albums that were somewhat successful but didn’t quite manage to hit the right note, Morrisette’s experimentation on Jagged Little Pill would take the world by storm.

In 1995 a young Canadian woman would release an album that would define an era of teen angst and influence pop and alternative songs for the next 30 years of music. But Alanis’ global hit was not without its journey.

Born in 1974 in Ottawa, Canada, Morrissette was the child of two teachers. While it’s nothing more than anecdotal, it is rather interesting that three of the top selling albums of the 1990s were created by Canadian women. In addition to Jagged Little Pill by Alanis, Celine Dion and Shania Twain also had multi-platinum big sellers.
Beginning with the piano at the age of six or seven, music was a central part of Morrisette’s life. By 16 she was already recording her first demo and by 17 her first album, Alanis, which was released in Canada. The debut album was a moderate success but didn’t really reach an audience outside of her home country. It was also a completely different sound from her later work. As she began to focus her efforts on a dance or pop songs, Morissette knew there was more emotionally rich music inside her.
Her next album, Now is the Time, had a more thoughtful lyricism and was driven by slower and less produced tracks. It didn’t sell nearly as well as her debut and MCA records but this did not resign her for a third album. Alanis needed a change and that change would come in the form of her move to LA.

As she tried to settle into LA life Morrissette would write a song every day, Monday to Friday, and then rollerblade on the weekends. She knew very few people in her new home and later said that the anonymity had helped her writing immensely. When she went into the studio she had more than enough tracks for her album and her musical influences had grown too. Long gone was the pop-dance and ballad lead music of her previous albums, and a new experimental, alternative sound had taken their place. Her lyrics were deeply emotional, passionate and raw, and they weren’t just a hit in Canada.
Alanis was hoping to sell about 100,000 records with this new album but she and her producer, Glen Ballard, couldn’t get any label to take it. Eventually it was picked up by Maverick records who were hoping she’d sell enough of it to produce a second album. She sold over 33 million records worldwide.
Jagged Little Pill shot Alanis into superstardom. She embarked upon a worldwide tour, supported in part by a cool new band called Radiohead, who Taylor Hawkins (her tour drummer and later the drummer for The Foo Fighters) introduced her to. Morrissette would later say that Thom Yorke’s excitement in seeing where her music would develop to next was a breath of fresh air in comparison to the label exec who only seemed excited to see how much money it might make.

The album won numerous awards and was nominated for countless more. It has become a soundtrack for a generation, and generations since, but arguably it still hasn’t received all the praise it deserves. Ezra Koenig, lead singer of Vampire Weekend, said that “Jagged Little Pill is probably one of the greatest albums of all time, written by a teenager, but nobody talks about it that way.” This narrative of young artists that we hear all the time now simply wasn’t as prevalent when Jagged Little Pill came out. Morrisette has suggested that it is possible that her age was, in a sense, “irrelevant” to the popularity of the music and therefore didn't take centre stage in the publicity surrounding it. “[Maybe] it was because I was just writing about my human experience, it didn't need chronologising.” Morrisette said about herself. 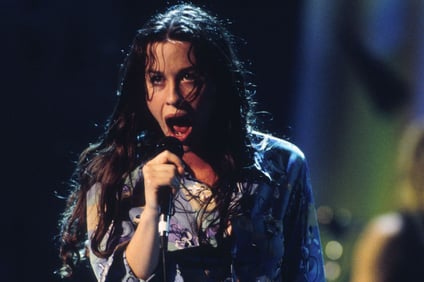 This idea of a ‘new young voice’ isn’t something that plagued her work and what this meant was that the music wasn’t confined to an age group, but struck a chord with a broader audience. She also suggested that because she didn't write about high school or parents that this distanced her from her age and only served to help that more universal quality the album has.

Looking at the artists who came after Morrisette like Meredith Brooks, Avril Lavigne or Billie Eilish, the influence of Alanis, and Jagged Little Pill in particular, has remained key in pop and alternative music. A variety of artists have drawn that angsty sound which was so distinctively combined with a broad musical range, straight from her work.

The rawness of this record still screams out today. The unusual sounds and voice that captivated audiences 25 years ago are still undeniably intriguing. The lyrics of pain, anger and hurt, blended with tongue-in-cheek writing, build toward an album that is not only ahead of its time but still remains fresh today. Jagged Little Pill is an album to scream when you're angry or upset and to belt out when you're happy. It is most definitely an essential listen!