The latest in our survey of Classic Guitars from Rock and Roll History – this time the Gibson Les Paul and one of its maestros, Jimmy Page... 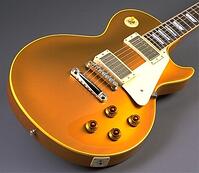 Les Paul – jazz, country and blues guitarist as well as guitar innovator – had been experimenting with solid-body guitars since the 1930s. Two of his handmade, experimental solid-bodies – the ‘Log’ and the ‘Clunker’ – led to the 1952 release of the Les Paul model, Gibson’s first solid-body, which was to become one of the world’s most influential guitar designs.

The Les Paul’s construction was complex. A two-pickup guitar, it was built from a mahogany neck with a rosewood fingerboard, set into a mahogany body with an arched, carved maple top, distinguishing it from the flat-top Fender models. The Les Paul’s controls – two tone, two volume and selector switch – were mounted on to the top and accessed by two separate plastic covers in the back. The set-neck construction and choice tonewoods, in conjunction with hardware that was screwed directly into the top, made for a warm, creamy tone with considerable sustain. The original Les Paul was completed with a lavish gold-coloured metallic finish, earning it the nickname ‘Gold Top’, although some models had gold-coloured sides and backs as well.

Gibson created several Les Paul variations, including the fancy custom no-frills Les Paul Junior. The most coveted Les Paul is the Standard, introduced in 1958. On that model, the original gold finish was replaced with a transparent cherry sunburst finish – which graduated from red to orange – revealing the instrument’s maple top; this was sometimes covered with spectacular ‘flames’ or figuring in the grain. The Standard featured two powerful humbucking pickups.

The Standard was discontinued in 1960, but as players like Clapton and Page picked up the instrument later that decade, it essentially became the first collectible electric guitar. Owing to its quality and rarity – only 643 models were produced in 1959 – the original Standard is now considered the Holy Grail of electric guitars, with clean examples currently fetching up to £250,000.

Jimmy Page (b. 1944) became an icon of rock guitarists in the Seventies with Led Zeppelin. Elements of his playing style have been copied to the point of cliché in the years since Led Zeppelin dominated the rock world, but as the originator Page developed the heavy-metal blueprint for all the guitarists who followed.

His first electric guitar was a 1949 Gibson Les Paul, the guitar with which he became associated throughout his career. After later playing Fenders, he came back to Gibson and The Les Paul that he bought from Joe Walsh of the James Gang (and later of the Eagles), in April 1969 became his Les Paul (indeed his guitar) of choice, his 'Number One'.

After leaving school at 16 he played briefly with Neil Christian & the Crusaders before becoming an in-demand session musician. Between 1962 and 1968 Page played on sessions for bands including the Rolling Stones, the Who, the Kinks, Donovan, Them, Cliff Richard and Burt Bacharach, and was often hired as an insurance policy in case the band’s guitarist couldn’t cut it in the studio.

In With the New 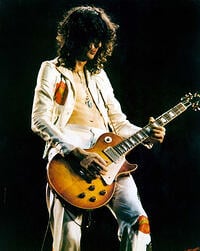 But the joy of sessions was already fading by 1966 when Page joined the Yardbirds, for whom Jeff Beck was lead guitarist. A short but exciting experiment with Beck and Page as twin lead guitarists ended when Beck abruptly left the band. Page found himself carrying a disillusioned band, and after Little Games’s (1967) commercial failure, he started planning a new band, encouraged by Yardbirds’ road manager Peter Grant. Page, Robert Plant, John Paul Jones and John Bonham came together as the Yardbirds were disintegrating in 1968, and recorded Led Zeppelin I (1969) before manager Peter Grant secured a record contract with Atlantic. The album’s raw sound and Page’s dynamic range, along with innovative techniques, made a resounding impact. Led Zeppelin I spent 18 months in the charts in the US and UK, as the band toured incessantly.

Led Zeppelin II (1969) topped the charts on both sides of the Atlantic, propelled by Page’s signature riff on ‘Whole Lotta Love’. The band broadened their scope with Led Zeppelin III (1970), adding more folk-influenced acoustic songs between the rock and blues numbers. This approach paid off on Led Zeppelin IV (1971), which featured the bombastic ‘Black Dog’, the more restrained ‘Misty Mountain Hop’, and the monumental ‘Stairway To Heaven’, which drew on elements of both.

Through the mid-Seventies Led Zeppelin swept all before them with Houses Of The Holy (1973), Physical Graffiti (1975), Presence (1976) and an epic live show that was captured on the film and soundtrack album The Song Remains The Same (1976). But in the summer of 1977 the band’s career came to a sudden halt when Plant’s son died during a successful American tour. They returned in 1979 at the Knebworth Festival, but the following year, Bonham died after a drinking binge and Led Zeppelin was at an end.

During the Eighties Page occupied himself with the film soundtracks Death Wish II (1982) and Lucifer Rising (1987), a solo album Outrider (1988), the Robert Plant collaboration The Honeydrippers Volume One (1984), and The Firm project with singer Paul Rodgers (formerly of Free). In the Nineties he worked with former Deep Purple singer David Coverdale on Coverdale Page (1993) before reuniting with Plant for the re-styled Zeppelin-esque albums No Quarter (1994) and Walking Into Clarksdale (1998). The turn of the century found him working with American band the Black Crowes on Live At The Greek (2000).