All in a Name

In the late 1940s, inventor Leo Fender set about making an electric guitar that would be resistant to the feedback associated with amplified hollow-bodies. His concept was realized in 1950 with the Fender Esquire, a single-pickup solid-body guitar, followed shortly after by the Broadcaster, a twin-pickup version.

In 1951, the name of the latter guitar was changed to Telecaster, in order to avoid infringing on the Gretsch Company’s drum line, as well as to suggest state-of-the-art technology, similar to the name 'television'. (In the transitional period between the old name and the new, the unbranded guitars that were produced became known as 'Nocasters' – since it is estimated that only around 500 were made, these rare guitars are now unsurprisingly highly prized collector's items. Fender has trademarked the name and now produces modern replicas that recreate the guitar's unusual tone circuit and thicker neck.)

In making the Telecaster, Fender set out to create a dependable, minimalist guitar – one that would sound excellent while being cheaply and efficiently manufactured. Accordingly, the Telecaster was devoid of the select tone-woods characteristic of acoustic guitars, stripped of superfluous ornamentation, and constructed from easy-to-assemble parts.

Yet the Telecaster featured a number of innovations in addition to its solid ash body. Its bolt-on, one-piece maple neck could easily be replaced, and the neck’s truss rod allowed for precision adjustment. The guitar’s 21 frets were set directly into the neck, precluding the need for a separate fretboard and, to some ears, enhancing the sound.

The Telecaster’s fully adjustable metal bridge, the first of its kind, could be tweaked lengthwise as well as raised or lowered. Furthermore, the bridge allowed the strings to pass through the body, arguably enhancing the tone.

Initially, western-swing players were drawn to the instrument’s cutting, twangy tone. As the Telecaster’s reputation spread, it became the country-music guitarist’s instrument of choice. But the instrument came to be associated with a variety of genres. Bluesman Muddy Waters used a Telecaster to create his signature electric sound, as did a diverse set of other legends including modern jazzman Mike Stern and punk rocker Joe Strummer, frontman for the Clash. And, after tuning his Telecaster to open G, Keith Richards explored this alternative tuning and created a whole new style of guitar playing. Here's a bit more about that Stones guitar legend... 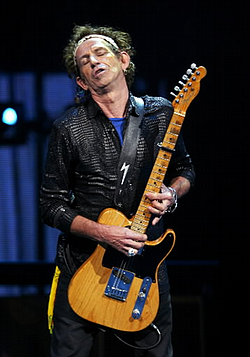 Keith Richards (b. 1943) attended Sidcup Art College, which was crucial to his development, as he was able to nurture his passion for rhythm and blues. He bought an acoustic guitar and mastered it by listening to records. Chuck Berry was a defining influence, and he soon began playing a cheap electric guitar.

A chance meeting with Mick Jagger revealed a shared interest in the blues. In 1962, Richards and Jagger attended an audition for a rhythm and blues outfit that Brian Jones was putting together, which evolved into the Rolling Stones. Richards and Jones spent days together trying to achieve the sounds of bluesmen like Robert Johnson, Elmore James and Muddy Waters. ‘… the whole secret … behind the sound of the Rolling Stones, is the way we work two guitars together,’ said Richards. The interlocking lead and rhythm guitars can be heard to good effect on Rolling Stones (1964), Rolling Stones No.2 (1965) and Out Of Our Heads (1965).

The recruitment of Bill Wyman (bass) and Charlie Watts (drums) completed the line-up. Richards was at his most creative on Beggars Banquet (1968), playing almost all the guitar parts on the album. Jones was replaced in 1969 by Mick Taylor. The high point of Taylor’s time in the Stones was Exile On Main Street (1972), on which the two guitars combined and interplayed effortlessly. Ronnie Wood was recruited after Taylor’s departure in 1974, and proved the ideal foil for Richards.

Richards is an innovative player, claiming the first chart hit to feature a fuzzbox, ‘(I Can’t Get No) Satisfaction’ (1965), while his use of open tunings became a trademark. He has a collection of over 1,000 guitars and was often associated with the Fender Telecaster, although in 1964 he was one of the first stars in Britain to own a Les Paul. Recently, he has favoured the Gibson ES-345.