The most famous living guitarist in the world, Eric Clapton’s (b. 1945) career has passed through an extraordinary series of highs and lows during his five decades as a guitar hero. He has also experimented with numerous stylistic changes but has always returned to his first love, the blues. 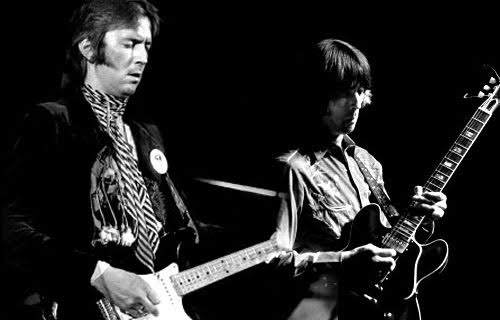 From Yardbirds to Legend

A love child born in 1945, Clapton was brought up by his grandparents, whom he believed were his parents until he was nine. He started playing guitar at the age of 13 and in 1963, after playing in a couple of south London bands, joined the Yardbirds, establishing his reputation on the rough and ready Five Live Yardbirds (1964). He quit the Yardbirds in 1965 after recording their first hit, ‘For Your Love’, and joined John Mayall’s Bluesbreakers. Bluesbreakers With Eric Clapton (1966) is still regarded as one of the seminal blues guitar albums, characterized by the fierce, sustained notes that Clapton created by controlled feedback.

Before the album was released, Clapton left to form Cream with fellow virtuoso musicians Jack Bruce (bass) and Ginger Baker (drums). Their jazz background was the perfect foil for Clapton’s blues and the band became superstars as a result of three albums – Fresh Cream (1966), Disraeli Gears (1967) and Wheels Of Fire (1968) – and a series of American tours. But within two years the band was worn out and Clapton subsequently hooked up with another virtuoso, ex-Spencer Davis Group and Traffic keyboard player and singer Steve Winwood, to form Blind Faith, which also included Baker. Unfortunately, Blind Faith (1969) could not live up to the hype surrounding the group, and they split after one American tour.

Clapton sought refuge in Blind Faith’s support group, Delaney & Bonnie, who helped him record his first solo album, Eric Clapton (1970) and then provided him with the musicians for his next group. Derek & the Dominos recorded one incandescent album dealing with pain and unrequited love, Layla And Other Assorted Love Songs (1970). Here Clapton was joined by guitarist Duane Allman, and the band toured Britain and America before imploding in a maelstrom of drug use.

Clapton was left with a heroin dependency, and after appearing – just – at George Harrison’s Concert For Bangladesh (1971) he retreated from view for the next three years, apart from one shaky show at London’s Rainbow Theatre. He returned, clean and rejuvenated, with 461 Ocean Boulevard (1974), a major worldwide hit album that introduced the then unknown Bob Marley through Clapton’s version of ‘I Shot The Sheriff’, a No. 1 hit in the US. He also broadened his skills from guitar hero to songwriter, notably on Slowhand (1977) with ‘Wonderful Tonight’ and ‘Lay Down Sally’. Extensive worldwide touring helped maintain his popularity, but by the end of the decade another dependency, alcohol, was hampering his playing.

By 1983 he was sober again, and Money And Cigarettes (1983) and Behind The Sun (1985) confirmed his return to form. His appearance at Live Aid in 1985 and his duet with Tina Turner on ‘Tearing Us Apart’ in 1987 raised his profile further. Crossroads (1988), a four-CD box set, went triple platinum in America, setting new standards in the reissue market, while Journeyman (1989) was his most successful contemporary rock album to date.

Back to the Blues

But it was the blues that set the seal on Clapton’s career. In 1992 he played the first Unplugged show for MTV, performing an acoustic version of ‘Layla’, ‘Tears In Heaven’ (written after the death of his son Conor) and a selection of blues songs. MTV Unplugged (1992) sold over 12 million copies. From The Cradle (1994), an electric blues album, topped the UK and US charts, selling 10 million copies.

Since then Clapton has balanced contemporary albums, such as Pilgrim (1998) and Reptile (2001), with the blues albums Riding With The King (2001) – recorded with B.B. King – and Me And Mr Johnson (2004) – featuring songs by Clapton’s hero Robert Johnson. Clapton also revisited his past, joining John Mayall for his seventieth birthday concert in 2003, reuniting with Cream in 2005 and teaming up with Winwood for shows throughout 2008 and 2009.

In March, 2009, Clapton performed with The Allman Brothers Band for their 40th anniversary but cancelled a spot at the Rock and Roll Hall of Fame's 25th anniversary show in October 2009 because of gallstone surgery. Clapton teamed again separately with Jeff Beck and Steve Winwood for shows during the first half of 2010.

From Gibson to Fender

In his early years Clapton favoured Gibson guitars, starting with a Les Paul Sunburst, and followed by a Gibson Firebird, a Gibson ES-335 and a Gibson SG (painted in psychedelic design), before moving to Fender Stratocasters in 1969. His most famous Stratocaster, ‘Blackie’, was sold at auction for $959,500 in 2004 to raise money for his Crossroads Centre for drug and alcohol addictions. In 1988 Fender inaugurated their signature range of guitars with an Eric Clapton Stratocaster model.

Those interested in learning to play guitar will find our book Guitar Chords (Pick Up & Play) immensely useful. If you love Gibson guitars as much as Clapton, why not take a look at our luxurious Gibson Les Paul notebook.