The tiny island of Paxos is supposedly the result of Poseidon cutting off a small piece of Corfu with his trident. Gaios, the main town on the island, is hidden from the sea by a ‘fjord’ of smaller wooded islands. The island has over 200,000 olive trees, about a hundred per person that lives on the island.

Zakynthos has its share of spectacular cliffs but shipwreck bay is particularly special. Only accessible by water, the cove gets its name from a shipwreck in the centre of it of a boat that was possibly used to smuggle cigarettes. Whatever its origins, the resultant setting is a stunning location.

The Temple of Aphaia - Aigina

Only 20 Doric columns remain of the 70 that once stood when the temple was built in 580 BC. The temple ruins do an excellent job of highlighting the wealth that the island had enjoyed in its early life.

The Island of Hydra

The stunning island of Hydra is not visited for its swimming as there is only one beach. The island’s architecture, however, is quite the feat of engineering, with houses in impossibly vertical succession. The island has no roads and everyone gets around on foot, while donkeys replace delivery vans. 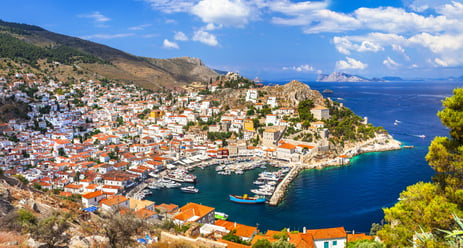 This stand-alone doorway is all that remains of the temple of Apollo built in the sixth century BC. There are many myths and legends that surround the island and this site is supposedly where Theseus left Ariadne after he defeated the Minotaur. The island also has some very large statues (one measuring about 11m long) that have puzzled archeologists for years.

Not only the most well known, but also the best preserve of all the Minoan sites, the palace of Knossos covers around 20,000 sqm. Consisting of chambers, courtyards, staircases and plumbing, the palace is a stunning piece of ancient architecture. Some have criticized the reconstructions and the repainting but it does allow a modern viewer to witness this site as it would have been millennia ago.

Rodini Park blends a beautiful natural space with some interesting buildings. Supposedly there was once a monastery in the park but now the most prevalent man-made structure is the roman aqueduct. The park makes for a great getaway in the middle of the city. 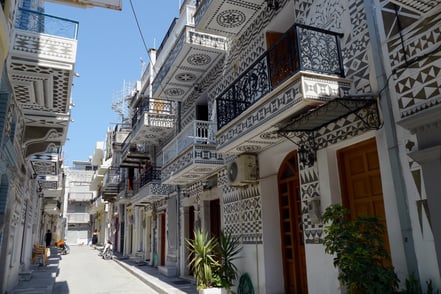 Known as the ‘Painted Village’, many of the buildings in Pyrgi are adorned with the ‘Xysta’ style. The bold geometric patterns are painted on to buildings of the small town and make for a really unique setting.

Sanctuary of the Great Gods – Samothraki

The Great Gods pre-date the inhabitants of Olympus by some time. The remaining columns of this temple are surrounded by a palace and a theatre that were later built near the site by the Romans. While the ruins are far from complete, it is a beautiful place and it’s very interesting to see evidence of worship towards ancient Greek gods.

This post is based off extracts from our book Best Kept Secrets of the Greek Islands (ISBN: 9781847866486). This title is part of our Best Kept Secrets series, which is packed with tonnes of expert advice and hidden locations. You can order it from our website here or on Amazon here.