In this week’s look at legendary jazz albums we are turning to two giants of the genre. In their classic record Ella & Louis, Ella Fitzgerald and Louis Armstrong really prove that opposites do attract. You couldn’t get two singers with more distinctly different tones and yet the chemistry on show is beyond question.

Born in Virginia, Ella Fitzgerald (1917-1996) moved to Yonkers, New York when she was very young. After her mother tragically passed away due to a car accident she went to live with her aunt in Harlem in 1932. After a period of trouble in her life, Fitzgerald took up singing on the streets to try and earn a little money. One of her earliest on stage performances came in 1934 when she performed at an amateur night at the Apollo Theatre where she won first prize. She later won the opportunity to perform at the Harlem Opera House and where she met Chick Webb. Her association with Webb would see her travel the country and record her first major hit, A-Tisket A-Tasket, and when Webb sadly died, Fitzgerald would become the band’s leader.

Ella Fitzgerald went on to have an immense solo career. She has a discography that is almost impossible to fully catalogue as there are not solid numbers for her singles and records before the 1950s. She sits among the top jazz singers in history and one of the most celebrated jazz musicians of all time.

Louis Armstrong (1901-1971) also belongs to this group. In a career spanning over 50 years, Armstrong is actually listed among influences that Fitzgerald herself cited as inspiring her as a teen. Few musicians, jazz or other, have had the musical reach and influence of “Satchmo”.

Born in New Orleans, Armstrong would buy his first cornet from a pawnshop at the age of 9 or 10. He used money given to him by a Jewish family that he worked for. Seeing their kindness and witnessing the ill treatment that he saw them subjected to, Armstrong wore a star of David for the rest of his life in remembrance of what they had taught him about resilience.

Over the course of the next 60 years Armstrong would become a household name and a central figure in the jazz revival of post depression America. Between his cornet and trumpet playing, not to mention his singing, Armstrong remains one of the most recognisable jazz musicians the world over. He recorded literally hundreds of tracks over the course of his career, composing at least fifty of his own (many of which are now jazz standards).

You can learn more about Ella Fitzgerald and Louis Armstrong on Flame Tree Pro! 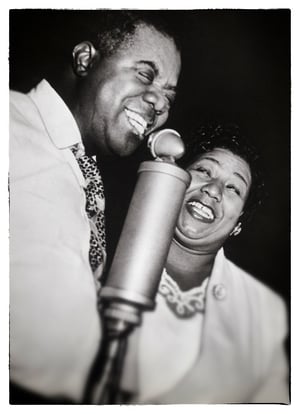 The voice is probably the oldest instrument that humans have utilised to express themselves musically. The use of the voice as an actual instrument in jazz music really came to a head when singers realised that they were able to improvise in much the same way that an instrumentalist might. Armstrong was a key figure in this development, as he, along with Adelaide Hall, would come to establish and popularise Scat-Singing. The legend goes that Armstrong dropped a lyric sheet while on stage and took off into scat singing so as to hide this mistake but there are many recorded instances of scat before this. He did certainly help to popularise it.

One of the most beautiful things that the voice offers, that also remains a central part of the jazz genre, is the focus on how different musicians approach a song. Two wildly different artists can bring entirely different tones, styles and musicalities to a piece of music and it can be particularly interesting to hear this done by multiple voices on the same track.

Recorded on August 16th 1956, the pair had spent the evening before playing a live event that would be recorded as Live at The Hollywood Bowl. Featuring the likes of Art Tatum and Harry Edison, the event also included the Oscar Peterson trio who would play the role of the band on Ella & Louis.

Considering the immense differences between the two voices present on Ella & Louis it seems a surprise that they make such a beautiful pairing. This record manages to showcase the range of both performers without ever feeling like they get in each other’s way. Fitzgerald presents this smooth toned silky voice that soothes the ear in counterpart to Armstrong’s gravelly tone that feels wild and almost untamed. Of course both singers are in complete control of their instrument and this is evidenced in the way thy play back and forth with each other throughout the record. It really is a rather unique paring that celebrates vocal jazz and the range of styles it can include.

This, when paired with Armstrong’s trumpet work, makes for a wonderfully rounded view of the immense talent that both musicians had and a wonderful entry into their music and the world of vocal jazz. Luckily, they made a follow up record together and rounded off their partnership with a version of Porgy and Bess by Gershwin.