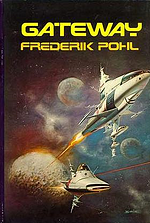 It is truly a great loss to the sci fi fandom that sf writer Frederik Pohl, author of such classics as Gateway and The Space Merchants, has died. He was prolifically involved in the genre during an impressive career that spanned over seven decades!

'[Pohl was] the last of the Golden Age greats, the first generation of Science Fiction Writers who created the genre'.

Pohl tasted success at an early age, having his poem Elegy to a Dead Satellite: Luna published by Amazing Stories magazine in 1937. This was published under a pseudonym, and he used several pseudonyms, such as S.D. Gottesman and James MacCreigh, over the next few years as he continued to have stories printed in pulp magazines. It was only in the 1950s that he actually began to publish under his real name; though he didn't abandon aliases completely.

His best-known work is probably the multi-award winning novel Gateway, the first in his Heechee saga (fantastic cover art above by Boris Vallejo). It features a space station based in an asteroid, created by an alien race but discovered by humans. Pohl was also a keen collaborator, writing stories such as The Space Merchants with Cyril Kornbluth in which they describe a distopian future where advertisers rule the world. The pure volume of his work is astounding though, and even more so given the fantastic quality of it!

We owe Pohl so much more than just his writing. The man himself was so much more to the genre than an author - though he wrote an incredible number of novels, poems, articles and essays. He also edited magazines such as Astonishing Stories and Super Science Stories, and used his considerable talent and judgement to edit others' books. As a literary agent Pohl represented such recognizable names as Isaac Asimov and John Wyndham. He even eventually got on the internet, writing his own fan blog called The Way the Future Blogs. He has been involved in many organisations, and he deserves credit for spreading and shaping  the science fiction fandom.

The true breadth of his contribution to science fiction is demonstrated by his winning Hugo Awards in all three categories of author, editor and fan writer - the only person to have done so. Pohl has deservedly won many awards, but above it all, and what I love most about him, is that he was demonstratively and unequivocally a true sci fi fan. He attended the first ever Sci Fi Convention in 1937 - attended by just nine people, and he never abandoned his zeal for the genre. He also recognised something which I believe to be very true: most writers are readers - Pohl therefore believed the fandom to be important for cultivating sf writers.

The task of trying to put Pohl's career, nay passion, into one blog post is overwhelming to say the least! But I could not let his passing go without some sort of tribute. Esteemed sci fi author and great contributor to the sf fandom himself, Neil Gaiman, a man whose own work I greatly admire, called him 'the last of the Golden Age greats' - a truly deserved moniker given by a true fan. Perhaps there is no better tribute than that.