Fantasy Fiction: Theseus and the Minotaur 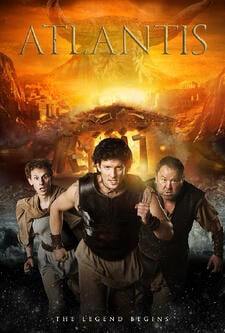 Greek mythology is full of gods, monsters and supernatural events – much like any other fantasy fiction. Popular tale 'Theseus and the Minotaur' is getting a retelling in BBC's latest fantasy adventure, based in the city of Atlantis. This brilliant show is bringing to life all sorts of Greek myths with a dash of humour, interesting character dynamics and plenty of action.

I'm loving BBC's Saturday night foray into the ancient world in 'Atlantis'. Part of the fun is seeing how the traditional Greek myths we know and love are turned on their head, and in how the hero Jason (who has been mysteriously transported from our world), like the audience, encounters the people whose names he recognises in unexpected ways.

His best friends are Pythagoras (the 'triangle guy') and a less than heroic Hercules. They soon meet a sweet and innocent girl who at the very end of an episode identifies herself as…Medusa! Jason's adventures in Atlantis actually seem to equate him more with the legendary hero Theseus than the Jason of Jason and the Argonauts we might expect. In the first episode he finds himself battling the Minotaur - who in a twist to the usual myth, is a man cursed by witchcraft to become this bull-like monster.

If you're not familiar with the story of 'Theseus and the Minotaur', here's an extract from our Myths & Legends book. To set the scene, Athens has been forced to send young men and women every year as sacrifices to the Minotaur, a terrifying half-man, half-bull creature who is kept in a labyrinth at Knossos on Crete – until Theseus decides to volunteer himself as a sacrifice…

At Knossos itself, Minos’s daughter Ariadne was captivated by Theseus from the moment she first caught sight of him, stood with noble bearing on the prow of the king’s ship as it made harbour. She later, and furtively, visited him in the prisoner quarters, where he and the others were held for the night.

Here she sighed out her love for Theseus, which Theseus willingly returned, being both attracted to Ariadne and also noting her value as an ally. Ariadne, mindful of the fact that all who had entered the Labyrinth were consumed by it, and guided by the prior advice of none other than Daedalus, gave Theseus a ball of silver thread. The principle was simple – begin unwinding the thread from the moment he entered the Labyrinth. The thread, coiled back in, would then show Theseus the way back out. There remained, nonetheless, the hulking matter of the Minotaur.

The day came for the Athenians’ journey into a man-made hell. Shouting Cretans watched fourteen souls dissolve into the shadowy interior, Theseus brave and upright at the front, the others hanging on his confidence with desperation. Theseus, who had managed to conceal a sword in his cloak, unwound the thread behind him as they wandered the endless, blind corridors. Their progress was slow and frustrating, but after a few hours the air became soured by the ghastly odour of the Minotaur. As they advanced, a brutal shape came forth from the half-light. The Minotaur, its senses keen from hunger, jumped to its feet and began bellowing with fury and expectation. Its range of movement was restrained by an unbreakable leg chain, so Theseus, his breath accelerating for the fight, told the trembling others to hold back. 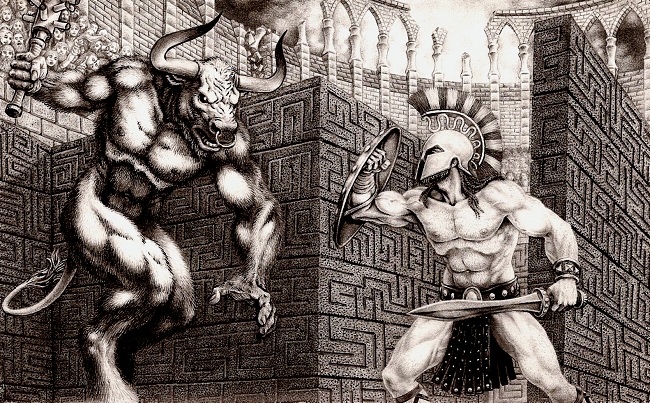 Thus hero and beast ran into combat, animal and human muscle stretching to the fight. The Minotaur flung huge boulders at Theseus, which the hero both evaded and returned, then the two locked in a pummelling wrestling match, the corridors thundering to blows and shouts. The contest continued for time, and slowly the Minotaur weakened, mentally and physically stunned by the resilience of his semi-divine opponent. Eventually the beast collapsed, its huge chest rising and failing with a sobbing pace. Seizing the moment, Theseus launched himself forward, grabbed the Minotaur by the horns, and arched its head back. Theseus drew steel and plunged it into the beast’s throat, foul blood jetting out into the dank air. The creature went rigid, then bled its life out onto the floor.

The Minotaur was slain. Theseus led the others from the Labyrinth, following the silver thread. When they emerged, Ariadne was waiting for her love. They raced to the harbour, scuttling all Minos’s ships but his flagship, which they boarded to make their escape to a celebratory Athens. Theseus, through strength and guile, had freed Athens from its human tribute to the Minotaur.

I've always been drawn to the fantastical nature of Greek mythology, and I can't wait to see what's next in store for our favourite characters in Atlantis either. The camaraderie between the lead actors is extremely watchable, whilst the mysteries keep on coming to tease us, and the epic storylines keep us wanting more. A second series has already been commissioned - thank goodness!