The term ‘Gothic’ covers a multitude of characteristics, forms and techniques. The family of stories that fit into the definition is immense, and the exhibition provided a good overview of the genre. The volume of works on display meant there was so much to see, from the very first creepy stories to contemporary horror movie posters, providing much insight into why we are persistently drawn to the disturbing, the chilling and the downright terrifying.  From the great cast of timeless characters that gothic fiction has brought us, the genre has above all explored what it is for a human to imagine, to discover, and to be intrigued and fearful of those plunges into the unknown. The human psyche, as such, plays an important role, and the exhibition brought this to light while exploring the varying manifestations of gothic tropes in art, literature, films, fashion, culture and real life crime mysteries. Tracing the history of gothic fiction, the exhibition guided visitors through the Victorian Greats, and the setting up of familiar ‘gothic elements’, like the use of a pseudonym, employed first by Walpole and used famously by Edgar Allen Poe. Mystery, suspense, intrigue: ghostly presences and the confusion of what is true, or real, has haunted people through the centuries and the gothic genre developed to address – and indulge in – those fears. The creation of a world out of imagination necessitates that the reality of such a world can only ever be doubted or unknown, and so the obscuration of the imagination and real is key for one of the most identifiable gothic features: a sense of atmosphere. The exhibition held its own gothic presence, fittingly draped in black colours, corridors of red and black walls, and Walpole’s own cloudy mirror at the entrance made a for chilling experience and lured the imagination in the same way as does the fiction it celebrated. 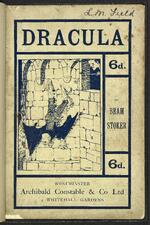 The exhibition first led its visitors through the earliest forms of the Gothic, introducing the literature that fed people’s fascination with the psychotic and unhinged, and encouraged their fearful curiosity of the apparently unfamiliar. Gothic fiction is not only responsible for providing scenes, atmospheres and situations though; some of the most famous fictional characters emerged from the gothic tradition. With a whole room dedicated to the character of Dracula, the exhibition was clear to point Dracula out as one of these, and not without reason: after Sherlock Holmes, Dracula is the most portrayed character in film. Curiously, he has been represented in a variety of ways – the exhibition included the first illustration of Bram Stoker’s Dracula, which is very different to the suave gentleman we may associate with the character today. Rediscover his story in the Flame Tree edition of Dracula [ISBN: 9781907562976], available in Paperback and ebook form, and if that’s not enough you can check out our ebook Vampires [ISBN: 9781781361740], which includes beautiful art work while investigating the fascinating history the modern vampire in books, films and art.  The exhibition also looked at the growing popularity of vampires in contemporary Young Adult Fiction, and the centrepiece of the Dracula room exhibited an ‘authentic’ Vampire-slaying kit, complete with garlic, pocket knives and holy water! 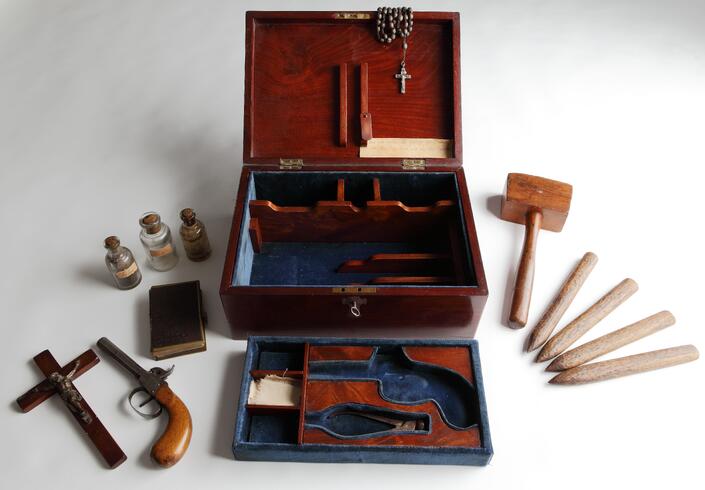 Two other infamous characters to emerge from gothic fiction are Frankenstein and his monster, starting a trend in the depiction of created monsters, inhuman terrors, and human experiments gone very badly wrong. Yet again, we can sense the fear and intrigue associated with ignorance, where in Frankenstein’s dim, dark laboratory products emerge from a cloudy or insufficient knowledge – gothic atmosphere matches gothic subject matter. Crosses between beast and human take their inspiration from the gothic too, and the exhibition featured Wallace and Gromit: The Curse of the Were-Rabbit as a result, as the film parodies the horror genre and incorporates many gothic elements. Other parodies explored at the exhibition are Seth Grahame-Smith’s Pride and Prejudice and Zombies, and Sherri Browning Erwin’s Jane Sleyre , showing the curious intersection of comedy and horror, which has given rise to a number of comedy zombie films in recent years.

Monsters and mystery have gone hand in hand for centuries: our ebook edition of Frankenstein [ISBN: 9781907562891] is available here, and for powerfully atmospheric monster artwork you need look no further than Cthulhu [ISBN: 9781781361894], now in ebook format and packed full of depictions of the H.P Lovecraft creation that has long captured the minds of readers.

Alternatively, if you find yourself irresistibly drawn to the morbid and apocalyptic, The Flame Tree ebook Zombies [ISBN: 9781781361757] takes the reader on a witty journey through the many varying portrayals of these grisly horrors.

The exhibition concluded with a room dedicated to the Goth subculture, exhibiting images by the photographer Martin Parr taken at the Goth festival in Whitby, North Yorkshire. Already introduced to a mannequin from Alexander McQueen’s 1996 Dante collection earlier on in the exhibition, visitors could feel little doubt of the profound influence of the gothic on modern culture as we know it today. Even in its less apparent forms – sensationalist fiction, the suburban American gothic ­– the endurance of interest in the macabre cannot be denied, and the range of mediums on display at the exhibition (film reels, clothes, books, objects, architecture, photos) showed that the legacy of telling unsettling, creepy stories has given rise to a growing, evolving, and engaging gothic world. 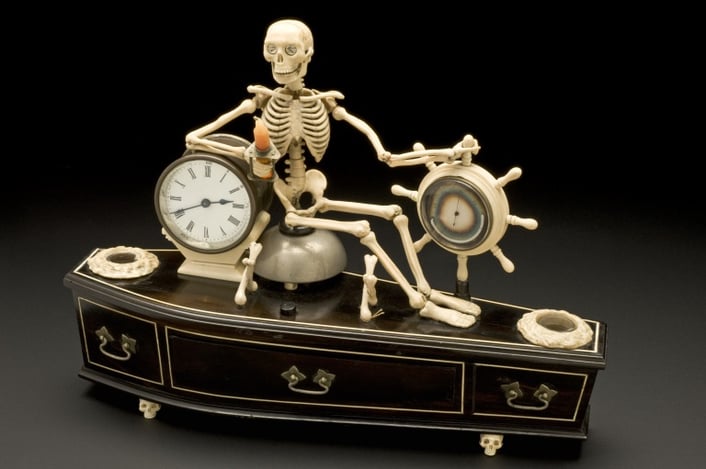 If you missed out on all the excitement at the exhibition, have a look at our ebook series on Gothic Dreams, which covers the literary tradition and evolution of the Gothic form. Or if visual interpretations of the Gothic are more your cup of tea, have a look at our book on ‘Cult Horror’ [ISBN: 9781781361771] , now available as an ebook, which looks at the representation of horror in art and film.

Images courtesy of The British Library.