The internet melted this weekend. The trailer for Zack Snyder's Superman v Batman was leaked and even though the quality was grainy and a little hard to hear, comic and sci-fi fans worldwide rejoiced.

The leak prompted Snyder and Warner Bros. to release the trailer officially, even though it was a lot earlier than planned (watch it here). But the effect does not seem to have been too damaging. At the time of writing the trailer has amassed over 25 million views in four days. The enigmatic (and pretty theological) opening is reinforced with some sneak peaks at Batman in action, piquing the interest of fans around the world.

I'm already desperate to see more, but as the leak forced the hand of Warner Bros., we may not see another trailer for some time. So until then, let's talk about crossovers. Dawn of Justice looks awesome because it brings together two of DC's most iconic heroes. We want to know why they're fighting and who's going to be painted as the bad guy. Though the story has already been seen by comic book fans in Frank Miller's The Dark Knight Returns, cinema-goers have yet to see their favourite DC franchises overlap. DC are, assumingly, trying to play catch-up in the wake of Marvel's hugely successful Avengers film (and upcoming sequel) by preparing for their own Justice League equivalent.

So which other Superman and Batman crossovers might we look forward to? I'm glad you asked:

Now, I'm not sure why, but as soon as I started thinking about this topic this was the first thing that popped into my head. On reflection The New Adventures of Superman probably wasn't the best iteration of Kal-El and his adventures, but at the time it was a TV show that I watched religiously. One of the more odd episodes was when Supes faced off against Tempus. Though not too odd in itself, the nature of the villain's arrival in Metropolis is rather bizarre. The fault lies with one H.G. Wells, who when travelling through the future hired Tempus as an assistant. How anyone thought that the famous sci-fi writer featuring in Superman's story was a good idea is a tough call. Even weirder is that someone pitched him as a character who could travel through time, despite him only being the author of The Time Machine and not actually featuring in it (explicitly anyway, but that's another story). You can learn more about H. G. Wells' sf fiction, The Time Machine by clicking here.

Now, this should sound silly. But it's actually kind of awesome. In this special anniversary edition of Detective Comics, Batman and Robin take a trip to London in an attempt to take down Moriarty Jr. Along the way the superheroes get a helping hand from none other than the deer-stalker-sporting detective, Sherlock Holmes.

Probably the most bizarre crossover on this list, as boxing legend Ali is still, after all, merely a man. But whatever, cast your inhibitions aside. In this one-off 1978 collector's edition, Superman's god-like power isn't quite enough to fight off an invasive alien species called the Scrubb. What goes down is basically a battle to decide who is earth's greatest fighter; somehow the last two nominees end up being Superman and Muhammed Ali who are made to fight and what do you know – Ali wins. Then earth's newly crowned victor beats up some aliens or something. It's pretty out there.

Predator and Xenomorphs (Batman and Superman)

During their respective tenures as earth's mightiest heros, both The Dark Knight and Superman have found themselves fighting enemies that are out of this world. Both The Predator and the Xenomorphs from the Alien films have taken a pop at both of DC's leading men. Let's start with The Predator:

In Superman's story, The Predator crashes in Central America. What follows is a fairly typical Predator-esque storyline, in which the alien, always seeking the most worthy foe, stalks The Man of Steel, hoping to make him his next prize. However, Batman actually faced off against Predator first in his own comics. He also receives bonus points for Alfred shooting The Predator with a blunderbuss. Amazing.

For their Xenomorph battles Superman again loses out. The story still sounds interesting but it can't really compare to Batman's, which features a fever-dream in which Bruce's parents are killed by a face-hugger and a chest-burster, followed by book two where Batman battles an Xenomorph version of the Joker.

I promise I'm not making this up. Here's the proof. In what was clearly an attempt to market the instant milkshake powder, Superman seems to have drawn the short straw and was forced to team up with Quik. The facts are a little vague on this one, as comic fans online seem to find resurfacing the memory of this shameless crossover exasperating. But basically some children are saved by Quik's ability to drink Nestlé milkshake. This one probably won't be coming to a theatre near you anytime soon. 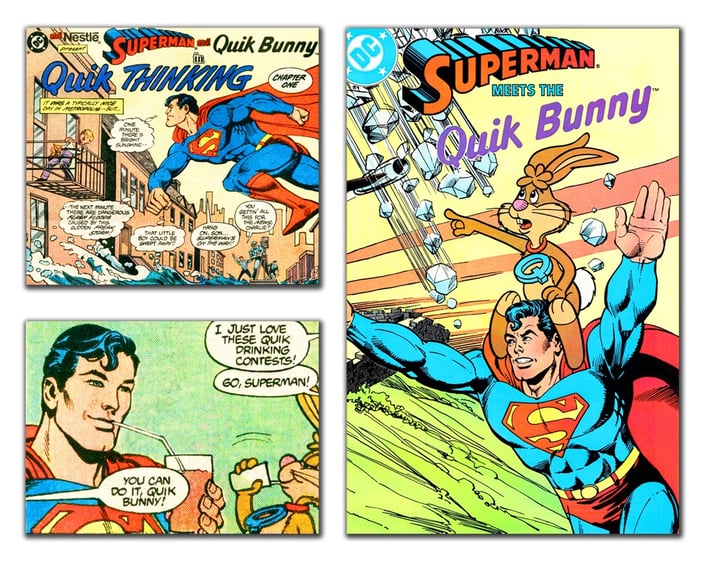 This is just the tip of the iceberg. There are many more odd crossovers, including the marriage of some DC and Marvel storylines. Sadly, those will have to be covered another day. Which comic crossovers would you like to see next on the big screen? Let us know in the comments below.

If you're a fan of all things comic-related, you might like our upcoming book Superheros: A Chronicle of Movie Posters (ISBN: 9781783615933). Full of the most stunning poster images for popular and niche superhero movies, this is a great gift for a comic lover, or even yourself! You can pre-order it here.