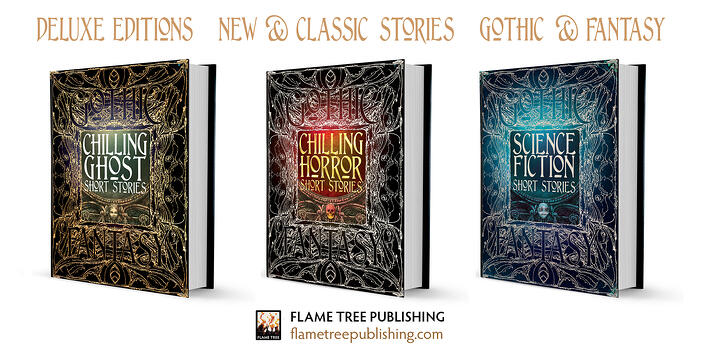 Our three collectable Gothic Fantasy anthologies, deluxe hardcover editions on Horror, Ghosts and Science fiction, each carry a potent mix of classic tales and new fiction, tracing the path of the thrilling tale from the early gothic to the modern fantastic. The range and high quality of entries forced us into a slight deviation from our original path, allowing us to include more of the new stories, at the expense of a few of classic writers. However, as you'll see below, we've selected a wide range of pioneer literary giants, from Henry James to E.M. Forster, Arthur Conan Doyle to Mark Twain, and, focussing on great reads, included some other fascinating contributions from the Golden Age of Pulps.

For a more extended piece on how we made our selection, please check the previous post here, but meanwhile, we're delighted to announce the full list of successful submissions for our Gothic Fantasy deluxe anthologies.

Mourners by Kurt Bachard
Stay Away from the Accordion Girl by Jonathan Balog
Audio Tour by Trevor Boelter
Ghost Farm by Zach Chapman
The Return of Gunnar Kettilson by Vonnie Winslow Crist
Flaming Fuses by Donna Cuttress
The House, the Garden, and Occupants by Amanda C. Davis
Victorians by James Dorr
The Figure on the Sidewalk by Tim Foley
The Waiting Room by Philip Brian Hall
An Englishman in St. Louis by Raymond Little
Death and Champagne by Luke Murphy
Lost Souls by Jeff Parsons
The Skeleton Crew by Michael Penkas
Songs for the Lost by Brian Rappatta
An Unquiet Slumber by Rhiannon Rasmussen
Almost by M. Regan
The Bulge in the Wall by Annette Siketa
The Psychic Fair by Cathy Smith
Unclaimed by Lesa Pascavis Smith

Ecdysis by Rebecca J. Allred
Mirror’s Keeper by Michael Bondies
Breach by Justin Coates
In Search of a New Wilhelm by John H. Dromey
Leonora by Elise Forier Edie
A Game of Conquest by David A. Elsensohn
Thing in the Bucket by Eric Esser
Worth the Having by Michael Paul Gonzalez
Extraneus Invokat by Ed Grabianowski
The Man in the Ambry by Gwendolyn Kiste
Start with Color by Bill Kte’pi
The Magnificat of Devils by James Lecky
Trial and Error by Frank Roger
Blessed Be the Bound by Lucy Taylor
Dead End by Kristopher Triana
Justified by DJ Tyrer
Deep-sixed Without a Depth Gauge by Andrew J. Wilson
The Dew of Heaven, Like Ashes by William R.D. Wood

The Body Surfer by Edward Ahern
Behind the First Years by Stewart C. Baker
Genetic Changelings by Keyan Bowes
Overlap by Beth Cato
Rest in Peace by Sarah Hans
The Hives and the Hive-Nots by Rob Hartzell
The Vast Weight of Their Bleeding Hearts by Alexis A. Hunter
Makeisha in Time by Rachael K. Jones
The Julius Directive by Jacob M. Lambert
Metsys by Adrian Ludens
Fishing Expedition by Mike Morgan
Red by Kate O’Connor
Nude Descending an Elevator Shaft by Conor Powers-Smith
Sweet Dreams, Glycerine by Zach Shephard
Jenny’s Sick by David Tallerman
Shortcuts by Brian Trent
A Life As Warm As Death by Patrick Tumblety
Butterfly Dreams by Donald Jacob Uitvlugt
The Care and Feeding of Mammalian Bipeds, v. 2.1 by M. Darusha Wehm
Clockwork Evangeline by Nemma Wollenfang

So, again, congratulations to all. Now we're looking forward to receiving the first proofs from the printer, and will provide further updates when we have them.