Some light spoilers ahead!

We begin a few years after the disaster that caused the Jurassic World theme park to close in the last film. The island’s central volcano is about to erupt (a blatant way of adding extra pressure and a time limit to the first half of the film). This has led the US government to debating whether it defines the dinosaurs left on the island as animals and whether to help these now endangered creatures. Animal rights protection groups are campaigning to have them saved and this is where we find Claire Dearing (Bryce Dallas Howard), who was operations manager at the park in the last film.

This is probably where the movie is strongest. There is a moment where it is explained that a whole generation of children in this world have grown up with these dinosaurs as not extinct and that to them they are just another kind of animal. There are several points in the film when a dinosaur is in danger or hurt and you feel sad for it in the way that you might for a human character in another film. I think it would have been interesting to focus on that with the threat of the impending eruption for the whole movie instead of veer off in the direction it does. 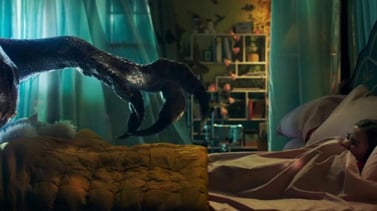 The film continues with a previously unmentioned partner of John Hammond, Benjamin Lockwood (James Cromwell), deciding he wants to help the dinosaurs. He has his estate fund a trip for a small team including Claire and Owen (Chris Pratt), to go and capture dinosaurs and have them moved to a new sanctuary island. The film then begins to look like ‘The Lost World’ for a while before it becomes clear that our main characters are pawns in a much larger villainous scheme.

There are some quite enjoyable set pieces that I’m sure would make good clips to re-watch but they are held together by an increasingly contrived story and broad set of narratives none of which feel that engaging. The characters never feel in any real danger and as such you never fear they won't make it. It becomes more a question of ‘how will they get out of each situation?’ not ‘will they?’. It’s also so clearly built of parts from other films in the franchise that it feels more like a parody than a new film.

There’s an engineer (in a yellow plastic jacket) being chased by dinosaurs in the rain, there’s an old man with an amber topped cane, there’s a big game hunter who pretends to be helping the expedition, there’s a new lab made dinosaur species that’s even crazier than the last, there’s a child that’s only present to add drama to the last act, oh and Dr. Ian Malcom makes a cameo so that Jeff Goldblum can better connect this film to the original ones (and make the parallels deafening clear). This list could continue but I think the point is quite made.

I can’t say for sure whether they have mined the Jurassic Park idea dry or whether they just wanted to churn out a new film and so copy and pasted in old bits and replaced Hammond with a new character. It might be interesting to follow the animal rights aspect all the way through and maybe they’ll do that in the inevitable sequel but I hope that

the franchise recognizes its ironic position of being in danger of extinction if it doesn’t evolve.