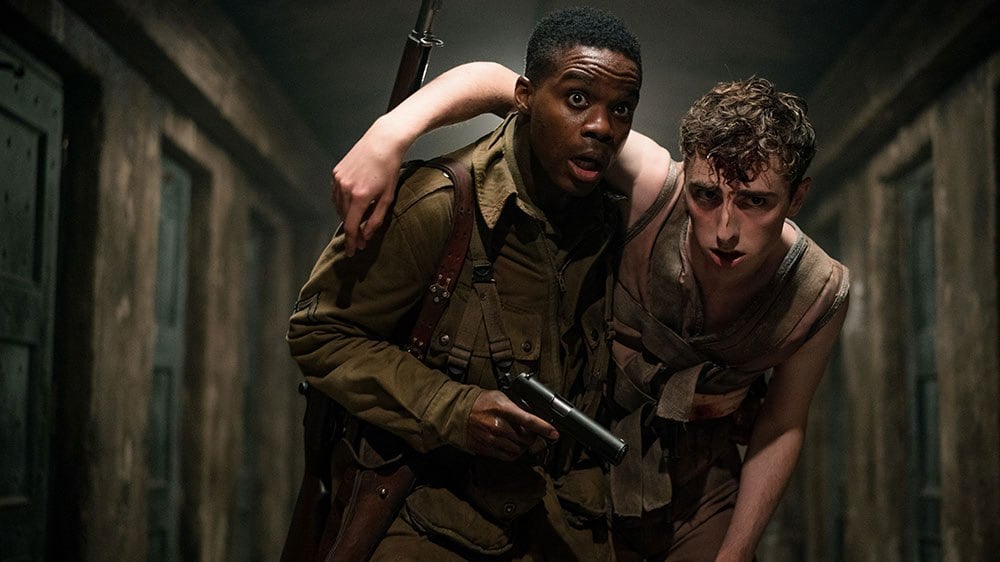 I will have to be transparently honest here and say my rating for this film will be skewed. There is a theory that people are drawn towards music, films and TV that they watched and enjoyed when they were teenagers. It’s called the Reminiscence Bump. These formative years can shape the things we enjoy for the rest of out our life, even if we understand that those things aren’t very good and I imagine this Reminiscence Bump extends to video games as well. At one point in this window of my development my friends and I were almost obsessed with the Nazi Zombies game mode on Treyarch’s Call of Duty games. We were embarrassingly high in the world rankings and played to the point that it was almost mechanical.

I’ll be honest, when a friend mentioned that there was a WWII era film featuring a nazi zombie element from J.J. Abrams’ Bad Robot production company, I didn’t even need to see a trailer, I was going to go and watch it. It was everything that a teenage me would have wanted but the surprise was that it wasn’t as bad as that accolade would have you believe. I would even go as far as to say it was good.

The film centers on a new recruit, Ed Boyce (Jovan Adepo) and his first mission: his squadron have been tasked with destroying a radio tower in a French town to ensure safe passage for air support during D-Day. The squad is made up of all the characters you’d imagine; a stone-faced leader, a wisecracking guy, a couple of young recruits and a soldier with a camera documenting the mission. They arrive in the town only to find that the civilians are being used for experiments. They must decide whether to continue with their mission or find out what sinister science the Nazi’s are attempting. 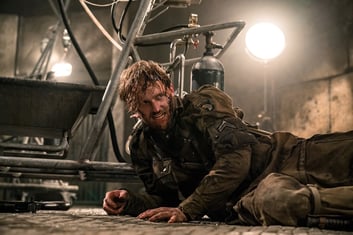 This very basic story, focusing on a tight mission and narrative lends itself to this type of action/horror. It would have been very easy for the film to go completely of the rails and have some crazy back story they try to jam in (like the Call of Duty games eventually tried to) but it restrained itself and what’s left is a decent action film with some nice horror-leaning moments. I wouldn’t say the film is overly scary but I would say that there were scenes when I felt legitimately tense. One of these moments, rather surprisingly, had nothing to do with the zombie storyline but the war itself. The first twenty minutes, showing you the squad parachuting in to the warzone felt claustrophobic and uncomfortable. The juxtaposition between the tight environment packed with soldiers compared to the scale of the firefight they were entering might actually make some viewers feel a little sick. If the movie had continued to just be a war film in that style it would have made for a pretty decent popcorn action flick. Gladly, it didn’t and instead veered slowly into the zombie story we were waiting for.

There is a long tradition of video game films being awful. One look at the Wikipedia page for them will show you that their ratings rarely get above 50% and many sit in the single digits. At every turn in this film, the teenage nostalgia my brain was swimming in couldn’t help but wish that they’d slapped a Call of Duty or Wolfenstein title on it and changed that. There were scenes that looked straight out of either game and a plethora of undead that would have been perfectly at home in the castles, theatres and test sites of any Nazi zombie game. If you grew up playing those games then I have a hard time believing you won’t enjoy this.

If you didn’t grow up wasting your time playing those games then I still think there is something here to enjoy. The acting is fine, although the dialogue at points is a little clunky, and the film chugs along at a fair pace. As much as I wanted it to be tied to a video game franchise, it was delightfully refreshing to get this kind of genre film that isn't just a cash grab tie in to a franchise. It’s loud, gory and unapologetically cartoony. It’s not a film that will light the awards season on fire or will have critics falling over themselves to tell you how amazing it is but, if you’re not quite done with the Halloween season, then this might make for a nice pick for your next trip to the cinema.