The first scenes of the new Sicario film set the tone for the whole feature. They are gritty, violent and difficult to watch. It pulls no punches with the visuals, which, in an age of action films being dominated by superheroes and The Rock, feels increasingly unfamiliar. You expect the camera to pull out or cutaway but it holds and lets you see everything as it happens.

There’s an interview where Jackie Chan discusses the difference between making films in Hong Kong compared to America. Among a litany of cinematic cultural clashes, one he makes a point of mentioning is the way American editors cut. He points out that they cut as a person is punched or hit (or in this case shot). This gives the illusion of contact and might be done to keep a lower age rating or because stuntmen are expensive. In Hong Kong they cut to a different view just after the hit has happened and then show the same hit again. The repeat is a fraction of a second but, because your brain registers it twice, it gives the impression of an even heavier hit while still having that same dynamic shot.

Sicario ignores both the ‘American cut’ and the ‘Hong Kong cut’ in favor of something much more unsettling: not cutting at all. There are multiple points in the film where you literally watch a person being blown up and it’s the complete visual that makes it so difficult to palette. People are shot and not only do you see them being shot but continue to see them after they’ve been shot.

The important aspect of this is that both the main characters and the people they are against have these moments of intense violence. It’s not a film where you can say ‘the good guys and the bad guys’ and I think that this style of editing has a lot to do with that. It’s difficult to call a person with no guilt about blowing someone’s family up a ‘good guy’, especially when you’ve so bluntly been shown this happening on both sides. 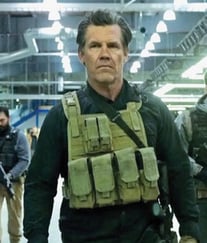 While I would say that this editing style is the movie’s most successful trait, it has many other qualities that make it a great watch. The music by Hildur Guonadottir is amazing. It constantly sits in the background building tension until occasionally bursting into the forefront. The acting is also quite enjoyable. Josh Brolin and Benicio del Toro helm the film well, while the two young actors (Isabela Moner & Elijah Rodriguez) also put in very engaging performances.

The film opens by introducing us to all the major themes. It presents us with examples of Islamic terrorism and then the Mexican cartels human trafficking system before re-introducing Matt Graver (Josh Brolin) from the first film. Graver is tasked by the US government with ‘starting a war’ with the Mexican cartels. This is intended to help stop the trafficking while also disrupting the terrorist’s effort to get into America. The film follows Graver who reconnects with Alejandro (Benicio del Toro) to go after the cartels again.

The story is interesting and is made particularly interesting by the recent child separation crisis at the Mexican-American border. It seems to serve more as a vehicle to discuss the tactics of the American government and its military that to tell a gripping character driven story but this is not necessarily a negative. While the plot is a touch convoluted at points, the message of the brutality of both sides of the fight comes through successfully.

While not without its self-indulgences, the film is a well-made military-crime thriller. It is exciting and engaging throughout with some scenes being quite difficult to watch. I would recommend the film and would only caution those who feel queasy at the sight of violence.