Kicking off this month's author Q&As, we have JG Faherty. He talks about what he's writing now, what influenced Hellrider and advice to aspiring writers! Be sure to check in tomorrow for more writing inspiration!

Hellrider is a grindhouse-style darkly satirical horror novel about love and life in a small town under siege by a uniquely insane ghost who wants revenge on the motorcycle gang that killed him. It’s a tale of revenge, murder, madness, and regret, wrapped within a coming of age love story.

Underneath the scares and murders are two simple themes: the importance of family and the importance of love. Because if you have your family and you have love, you can triumph over anything. Hellrider, is, at its core, a love story. It’s not obvious at first, but in the end, everything else is secondary to that.

No. I went into this with the idea of creating an antagonist very different from anything anyone has seen. I wanted someone/something completely off the charts, like one of the characters from Sons of Anarchy but if they were insane. And back from the dead.

The protagonists are based more on my memories of my early adolescence. What it’s like to be an outsider, to fall in love for the first time, to be on the cusp of being a teenager. It’s a crazy confusing time.

I think throughout the writing of this book I kept thinking about the grindhouse movies of Quentin Tarantino and Robert Rodriguez in the modern era, and the all the crazy motorcycle movies of the 1950s and 1960s, plus the more recent Sons of Anarchy. The book actually began when I was watching Sons of Anarchy and I had the thought, “What if one of these guys came back from the dead to get revenge on the people who killed him?” And from there, I knew it needed to be total grindhouse.

Never kid yourself that it’s easy. It’s a job, and a hard one. You have to discipline yourself to sit down and write every day, you have to be willing to take criticism and advice from your editors, and you have to remember that it’s a craft where you never stop learning how to do something better. And most of all, make sure you’re nice to the people you deal with – this is a business where giving back is important and so is being polite.

This book, like almost all of mine, was written at my desk in my home office. Sometimes I also write by hand in a notebook when I find myself stuck on a particular chapter or scene.

I always write in silence. Sounds break my concentration, and when it’s broken, it’s hard to get it back.

For me, it’d definitely harder to write because I am my own worst critic. I write and rewrite and rewrite hundreds of pages and ultimately don’t use half of them. By the time I get to the editing stage, usually it’s a piece of cake because I’ve done all the hard work already.

I don’t mind it at all. In fact, I seek it out. Before any of my manuscripts goes to a publisher, it’s already been read by my beta readers, a group of 6 fellow novelists who take great pride in finding every glitch and making sure I put out the best possible story.

Like always, I’m working on several projects. My next novel, from Flame Tree, is going to be a sort of Lovecraftian twist on the Frankenstein trope. And right now I’m working on a new novel, dealing with exorcism and poltergeist, plus a novella and some short stories.

You’re from New York; why did you choose to set Hellrider in Florida?

I’ve spent a lot of time in Florida over the years; I’d love to retire there someday. I’m especially fond of the Everglades area from my college biology class days when we used to camp there. And I wanted a hot, steamy background for the novel, so southern Florida seemed like a natural choice.

Your bio states you’re from the haunted Hudson Valley of New York. Is it really that haunted? And did that contribute to you becoming a horror writer?

Absolutely! I grew up surrounded by tales of ghosts, aliens, and monsters. I lived 2 streets from 200-year-old graveyard. Key Revolutionary War battles were fought practically in my backyard. Tales of wendigos, Bigfoot, Native American spirits, and water demons abound. I live near the UFO capital of New York and the home of Washington Irving. How could I not grow up to love all things dark and scary?

Thank you to JG for taking the time to talk to us about character influences and telling us about Hellrider. You can pick up this new FLAME TREE PRESS edition of his book, along with the other August releases now. It will be available in paperback, hardback and ebook. Check out our website for details. 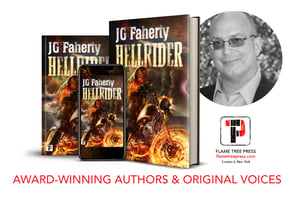 A life-long resident of New York's haunted Hudson Valley, JG Faherty is the author of 6 novels, 9 novellas, and more than 60 short stories, and he’s been a finalist for both the Bram Stoker Award® (The Cure, Ghosts of Coronado Bay) and ITW Thriller Award (The Burning Time). He writes adult and YA horror, science fiction, dark fantasy, and paranormal romance, and his works range from quiet, dark suspense to over-the-top comic gruesomeness. As a child, his favorite playground was a 17th-century cemetery, which many people feel explains a lot. You can follow him on Twitter, Facebook, his website and blog.