In the first of this month's Q&As with our November authors, we have Kenneth Bromberg, author of City of Angels. He discusses some of the themes in the novel, who he based his characters on and what he's working on now! Be sure to check in tomorrow for more writing inspiration!

It’s about people trying to live decent lives and solve serious crimes in a corrupt, racist, misogynist world. It’s about Los Angeles in 1924.

Family, honor, and a personal sense of right and wrong.

The characters are each a conglomerate of real people I know and real experiences they have had.

I was influenced by writers Raymond Chandler, Walter Mosley, and James Ellroy, and by a fascination with the history of Los Angeles.

As the shoe commercial says, just do it. Try very hard to write for a set amount of time every day, regardless if it’s a good day or bad, regardless if you’re feeling inspired. Just let it come out.

I write in my home in Santa Monica, but I first think out the story while taking long walks.

I usually have 60’s or 70’s pop music playing softly in the background. Somehow this keeps me focused, keeps my mind from wandering.

The hardest thing for me is to face the blank page, to first draw out the characters and the plot. I find editing and re-writing to be much easier.

It was quite helpful to have another person’s point of view, although sometimes hard on the ego.

Thank you to Kenneth for taking the time to talk today about City of Angels. You can pick up his book, along with the other November releases now. It will be available in paperback, hardback and ebook. Check out our website for details. 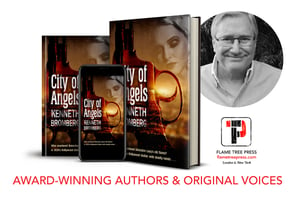 Kenneth Bromberg has wanted to be a writer for as long as he can remember. Born in Queen of Angels Hospital in downtown Los Angeles, he has had a lifelong fascination with the city’s corrupt and colorful history. This fascination is woven into his second novel, City of Angels, a noir tale set in the back alleys of 1920s Los Angeles, as well as his first book, American Dreams, a multi-generational saga about three immigrants from Europe who flee to New York City before arriving to the glitz and glamour of a very different corner of Los Angeles: Hollywood.

After college, Bromberg worked as a bartender, listening carefully to yarns of customers who'd left behind a checkered past to transform themselves into soap opera stars, real estate agents and even police officers. He later earned an MBA at UCLA and became a certified public accountant. During retirement, he started his writing career in earnest, utilizing the knowledge gained from his life experiences, a passion for history, and an ear for narrative.

Bromberg lives in Santa Monica, California, with his wife, Carol, close to their grown sons. He is currently working on his third novel.