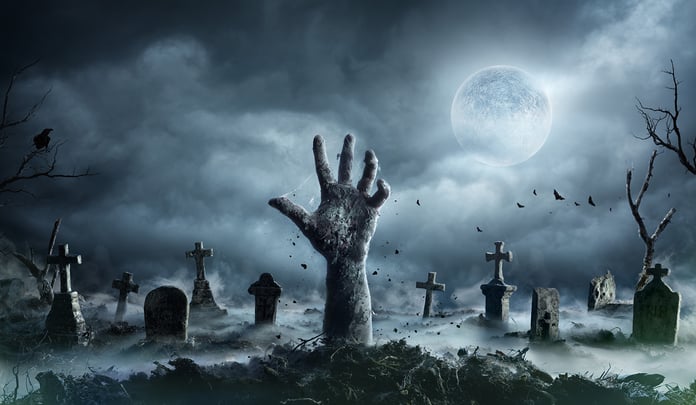 Roots of an icon

The word “zombie” comes from Haitian culture and literally means a reanimated corpse. There is a long tradition of superstition in Haiti and this has lead to practices like witchcraft being accused of things like the attempt to reanimate corpses and create new life.

While it has a fairly straightforward eytomolgy, the development of the zombie archetype, and use of the word, has been quite the journey. A perfect example of this is George Romero’s 1968 horror classic, Night of the Living Dead. A game changer in the overall history of horror cinema, Night of the Living Dead is often cited as the catalyst for the explosion of zombie material in horror fiction. The fact that it managed to do this without ever using the word “zombie” is not only amazing but representative of the incredible curiosity that people have for the character type. Romero has since used the word, including in the film’s sequels, and zombies have been a staple character and storyline ever since.

Romero was not the first to use a reanimated corpse as a character or a villain in particular. The earliest “zombie” that we have discovered so far comes from Mesopotamian literature. In the Descent of Ishtar and the Epic of Gilgamesh, Ishtar speaks of the dead eating the living.

If you do not open the gate for me to come in,

I shall smash the door and shatter the bolt,

I shall smash the doorpost and overturn the doors,

I shall raise up the dead and they shall eat the living:

And the dead shall outnumber the living!

The zombie, then, was first introduced as a threat and an evil force that would seek out the living for food.

The character type has not been rigidly held down by this definition and some of the most interesting interpretations of zombies are the ones that have deviated away from your standard brain eating monster. A key factor in zombie stories is often how those zombies came to be. This can usually be split into two groups; magic and science (with a certain amount of weight attributed to stories where we never learn of their creation).

There have been key moments in the history of both types of zombies but early examples of both are key in unravelling their development. The Descent of Ishtar is probably also the first use of magic to revive zombies but the early use of science to revive corpses comes from an unlikely source material. Outside of scientific papers and textbooks, Frankenstein is the first use of science to revive a person. While the story doesn’t follow the same narrative that you might expect from a modern zombie story, many of the parts are present. A seemingly evil monster given the spark of life and an ongoing chase between the living and the newly living. It may seem an odd beginning for the sub genre but it is a valid example that is found within a certifiably classic gothic horror novel.

Zombies have experienced waves of popularity. Throughout the 70s and 80s they were ubiquitous with the idea of horror and found in every type of horror fiction. As the nineties rolled through and zombies fell out of favour in western films and books, they experienced a rise in popularity in Asian media.This continued through the 00s until western media became re-intrigued with the character type. 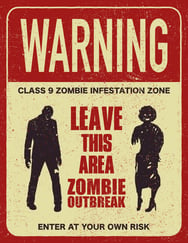 What the growth in zombie narratives in Asian countries had brought was brand new firms to the classic creature. We began to see new types of zombie that were new to western audiences making their way into films and TV. More stories would focus on individual zombies (or zombie like characters), more films had pathogen and science based origins and we also saw the rise of the fast zombies. These new forms reignited western interest in the zombie from cult films to blockbuster media again.

We also saw the development of more horror comedy throughout the 00s and zombies often made excellent characters here too. From Warm Bodies to Zombieland, comedy zombie films were a consistent mainstay in films throughout the 00s and into the 10s. A particularly important example in the sub genre has been Shaun of the Dead as it not only set a marker for great comedy but made excellent use of the zombie narrative. Considered one of the most influential comedy films of the 00s, it brought huge attention to the amount of material that zombies could provide.

Another big development in the history of zombie fiction is the huge role they have played in video games. Another place where we see the early existence of fast zombies, games like Resident Evil made great use of a known archetype to build intense action scenes and hold-your-breath-moments in games throughout the 90s. Continuing through to today some of the biggest games of the past decade have been based around zombie characters. With Call of Duty’s bonus game becoming popular enough to release its own standalone title and the critically acclaimed The Last of Us setting a new bar for storytelling and tension in video games, zombie games are an important part of the history of the character type.

Zombies have had an enduring intrigue for audiences over the past two hundred years and beyond. They play on very base human fears of the unexpected and the unrelenting and as such make excellent foes. Whether hard to kill or just present in their hordes, they can make for dramatic stories and epic battles. Where the zombie archetype will go next will be interesting. We see rehashed ideas for them all the time but we can't wait to see the next big shift in undead storytelling!