Today is publication day in the US for our much-anticipated anthology Lovecraft Mythos! As a companion volume to our earlier book on Lovecraft’s works, this collection looks at the broader fictional universe invited by the Mythos, collating stories from Lovecraft’s contemporaries as well as modern authors. The Mythos has a rich legacy of talented horror writers, and we’re excited to include entirely new stories alongside tales by Lovecraft himself, as well as the likes of Robert Bloch, Fritz Leiber, August Derleth, Ramsey Campbell and Victor LaValle. For a taste of what’s included, see below, where authors from the book share with us the various inspirations behind their Lovecraft Mythos contribution! 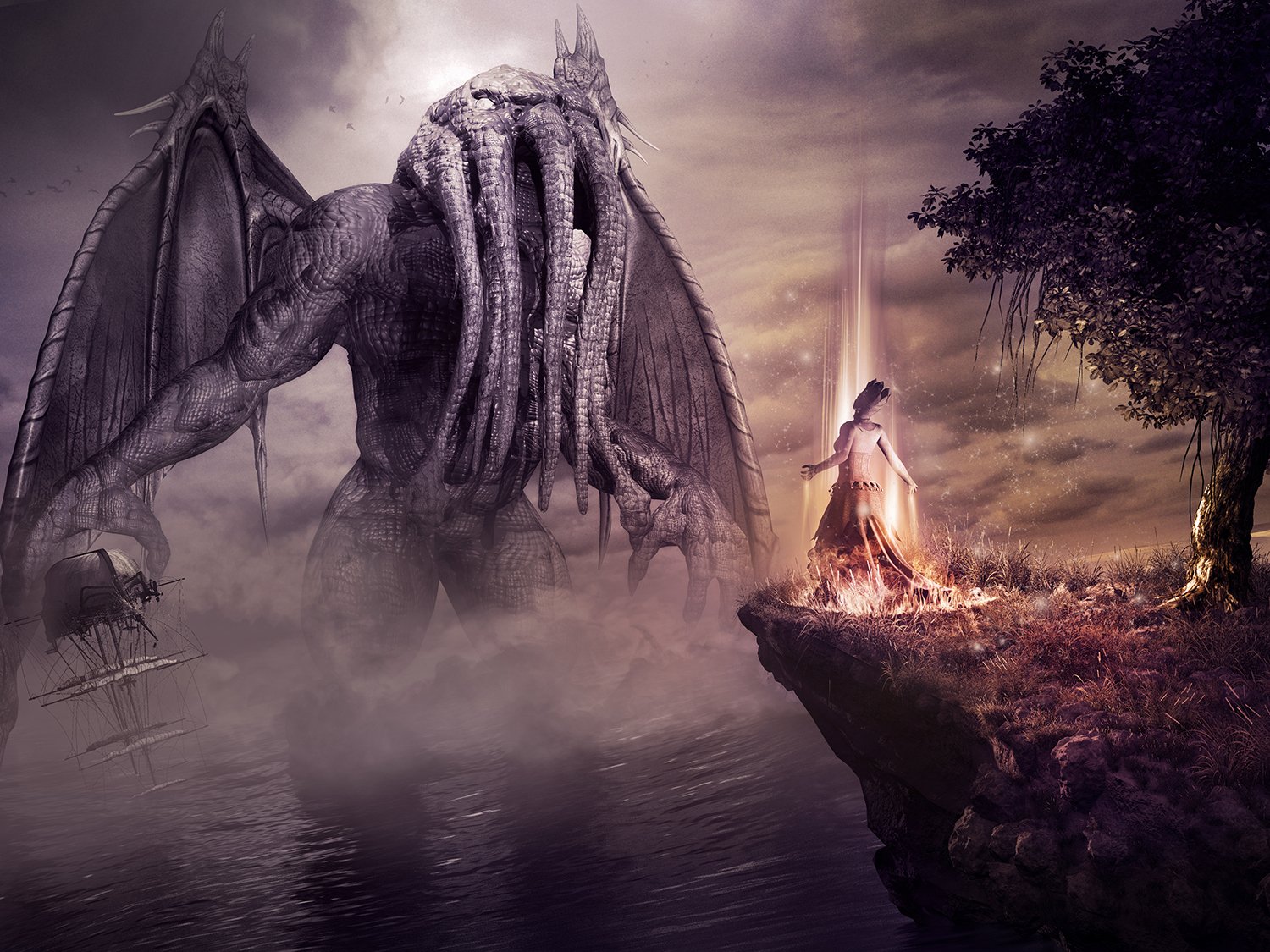 I had eaten Thai food, and there were hot peppers in it. While I was racing home from the restaurant with a bad case of acid reflux, some End-of-the-World people waving ‘Repent’ signs had stopped traffic on Hollywood Boulevard. Sometimes, it's weird things that end up inspiring me.

This story was originally written for Cthulhu Lies Dreaming and its premise contemplating what horrors Cthulhu would dream of and how they would interact with the real world. Being a queer writer, Yhagni caught my attention because she was a hermaphrodite. I'd also made a recent trip to South Dakota to visit some Lakota friends and appreciated how two-spirited people had traditionally held a position of honour and esteem. I respectfully combined the two ideas, added the trickster Iktomi, and had a story.

In early 1965 I came up with the first draft of ‘The Franklyn Paragraphs’, based on entry number 86 in Lovecraft’s Commonplace Book: ‘To find something horrible in a (perhaps familiar) book, and not to be able to find it again.’ In that version of the story (which completists can find in my collection Visions from Brichester) the whole thing is seen from the viewpoint of the character (not then called Errol Undercliffe) who has the supernatural experiences. It was one of several stories of that period that I thoroughly rewrote, starting from scratch and salvaging very little from the original draft. I suspect Nabokov put the notion of a mysteriously vanished writer into my mind, and I had a good deal of fun in turning the writer against myself. At the same time the form of the story is related to Lovecraft’s method (derived, I think, to some extent from Dracula and M. R. James) of lending credence to the story by assembling documents into a narrative.

There’s a strange related anecdote. Not many years ago I chanced upon an online reference to Errol Undercliffe. It took me to eBay, where a copy of a work by Undercliffe – This Perverted Body – was offered. Did I bid for it? Indeed, and I don’t think anybody else did. It proved to be an A4 pamphlet, containing a typed two-page surrealist story and fifteen illustrated pages each bearing two surreal collages in the manner of Max Ernst, each with a caption (‘The rattle made by vibrating teeth – the previous head of the convent faces half a dozen men of wisdom’ is typically gnomic). While the pamphlet looks as if it could have been mimeographed, I’ve never heard of another copy, and I wonder if it might be unique – even designed for me to find. In that case, what occult effect may be intended? What may have taken hold of my mind?

‘Foxfire Future’ is a favourite story of mine, in the way that we love the children who give us the most trouble. I wrote the first version many years ago as a response to post-apocalyptic stories that showed only the utter destruction of mankind and the idea that if the main characters didn’t have a weapon, they were defenceless. The cook always has a secret weapon at hand. Unfortunately, the story refused to gel, and research into a realistic scenario after such a great catastrophe that would wreck most of the world’s population showed a much grimmer picture than I wanted to portray. Then a friend suggested I use it for a Lovecraft Mythos story, and the rewrite took off in an unexpected direction that felt perfect. I am so happy that it has found a home in such a distinguished collection.

I've always been a fan of Lovecraft. The tone, the ideas, the possibilities. For ‘Grave Secrets’, I wanted to do two things: take the story out of New England and create a sense of unknown danger, that mystery that Lovecraft used so well in his best stories. I've set several other stories and novels in the fictional town of Rocky Point, and this makes a nice Easter egg backstory as to why that town is now so weird. In a more real sense, its setting is one very familiar to me...the woods behind the house I grew up in.

Cody Goodfellow – He Opens a Window 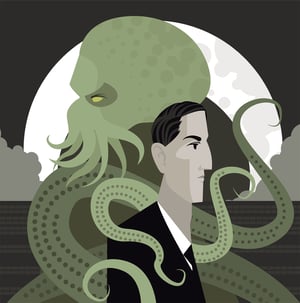 I was drawn to write about this shuttered Masonic Temple in Los Angeles, where friends and I ran lighting at an illegal rave in the early 90s, as a terrestrial gateway to the cosmic. Pretty much exactly as I described it down to the dog-kennel floor, it invokes a bizarre syncretic exotica vision of the world as a labyrinth of omens and portents, of secret knowledge and forbidden power. Where cosmic horrors usually happen to learned and sensitive types, I wanted to put totally pragmatic, worldly characters into the kind of revelatory scenario that would leave a typical Lovecraftian protagonist unhinged, to show how street-wise people are perhaps better adapted to accept the unimaginable than more imaginative people.

My wife and I actually did find the abandoned tent from my story, ‘The Damage’, while on a hiking trip on the west coast of Vancouver Island. It was such an odd find, complete with camp supplies, and all so neatly arranged, yet clearly none of it had been in use for a while. We immediately thought that it had to be a memorial of some kind, perhaps maintained by friends and family. The image and its implications stayed with me.

‘Always a Castle?’ marries my enjoyment of Lovecraft's ‘The Dunwich Horror’ and Gothic Lit. As a writer, isolation appeals to me. Combining this remote and strange house with the descendants of Wilbur and Lavinia Whateley moves the story squarely onto Lovecraft terrain. And of course, the first line refers to the weirdness of Shirley Jackson's We Have Always Lived in the Castle.

A few years back, I grew frustrated on Twitter (shocking, I know) when I saw an author being especially whiny about a round of copyedits he'd received. After a few of his pals chimed in and began disparaging copyeditors in general, the idea for this story was born. I've known many talented, hard-working copyeditors, both from my marketing days and through my writing career. This story is for them.

Thana Niveau – The Whisper of Stars

I read an article on mammoths surfacing from melting Siberian permafrost, and the ensuing ‘gold rush’ by maverick tusk hunters. I’ve been writing a lot of eco-horror lately and the setting just seemed ideal for Lovecraftian cosmic horror. We’ve heard about ancient viruses and bacteria being resurrected through climate change, and I couldn’t help but imagine what else might be lying dormant beneath the ice. Once it melts, we’ll be at the mercy of whatever’s under there.

Right from the first time I read Lovecraft I thought, ‘If the Cthulhu worshippers want to build up their base, they need children's books.’ A lot of titles naturally suggest themselves, but ‘My First Abomination’ was the one I wanted to write. It didn't turn out how I'd planned. The moment Verity started her slow slide into addiction and madness, I was hooked; I had to tell it her way.

John Llewellyn Probert – By Any Other Name

The idea for the story began with me wanting to take an everyday object or occurrence and turn it into something scary. The next step was to say what if it was just the one person who found that innocuous thing terrifying? And what if, perhaps, they had a very good reason for doing so? And here we are with ‘By Any Other Name’ where an ancient and evil entity can bring itself into being in water, from the tiniest raindrop to the largest ocean. And if you were the only person who could see it people would think you were mad, too...

Mark Samuels – A Gentleman from Mexico

I spent the last few months of 2005 on an extended sojourn in Mexico City, where I was quite amazed to discover that authors such as Lovecraft were much better known there than I would have anticipated. Even the bookstalls in the markets carried cheap editions. It seemed to be the case that Latin America was keeping alive the flame of weird fiction. ‘A Gentleman from Mexico’ was the result of this discovery.

At the risk of cliché, it was a dream. I woke with the memory of a girl looking down from a dock at a small empty boat, feeling loss and almost insupportable dread, realising that the people around her knew something that they would not reveal. I'm always reading horror, so it was natural to see the dream fragment through that lens, and at the time I was a frequent visitor to the coastal Oregon town of Newport. The story grew from those elements.

I was inspired by the possibilities hiding in plain sight throughout ‘The Thing on the Doorstep’, Lovecraft’s oft-underrated guignol of mind-transfer and murder. The story also amounted to his experiment in emphasising character development, social dynamics, and contemporary manners – the closest he ever came to channelling F. Scott Fitzgerald! To me, though, ‘Doorstep’ is most remarkable for being, in upshot, about a man who marries his father-in-law. This I treated as the crux of my ‘version of events’, and everything follows from there.

I’ve always been fascinated by the astonishing feats of building accomplished by the ancient Romans. Not the least of their accomplishments is the great sewer that runs under the city of Rome, the Cloaca Maxima. After 2,600 years, parts of it are still functional. I got to thinking about what might be living there, unknown to those walking above it, and of the kind of symbiotic relationship it might form with them to insure its survival.

‘Tracking the Black Book’ was one of my first forays into the Lovecraft Mythos. It came to me after reading a news story about antiquities hitting the black market when the U.S. invasion of Iraq was a catalyst for the looting of museums. The legendary Necronomicon was supposed to be of ancient Arabian origins, and it got me wondering what would happen if some hapless occult dabbler in New England managed to buy the cursed book. From there, it was easy to imagine the buyer’s remorse he might have if, while obsessively refreshing his FedEx tracking number, he saw calamity following the package on its way around the globe. 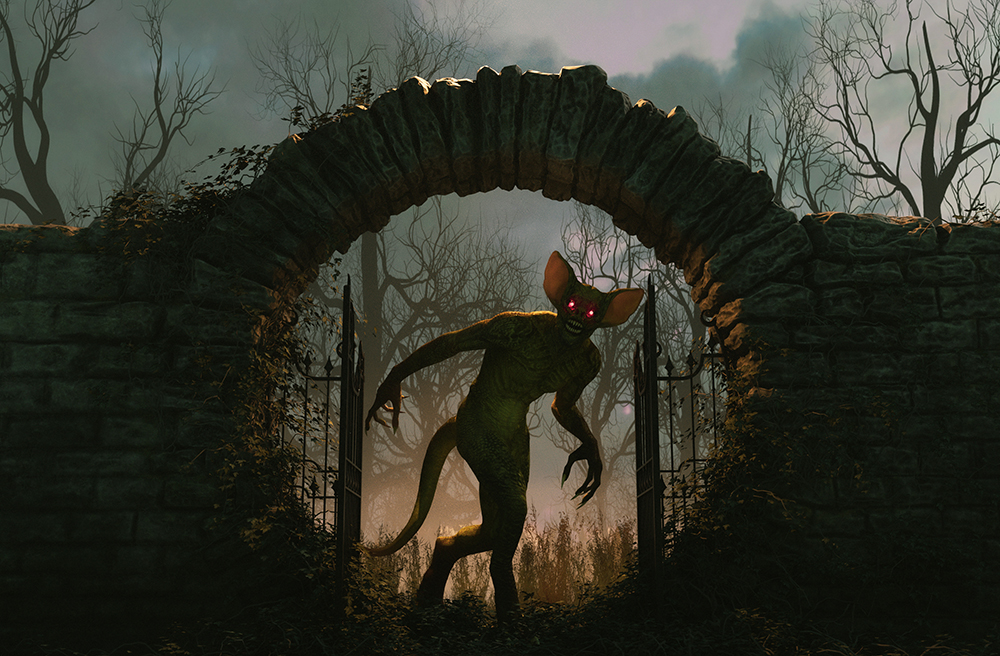 You can read these stories and more in 'Lovecraft Mythos: New & Classic Collection', available to order through our website here!