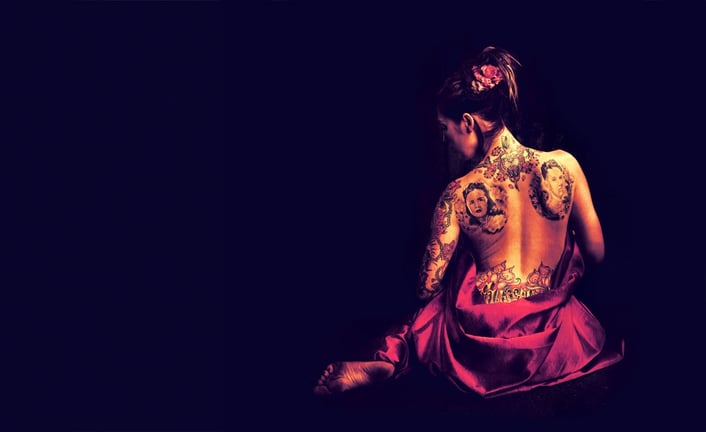 The beginning of tattoo history as we know it starts around the fire. It’s the soot from the cooking process that we’re interested in, though. Scrape it off and powder it up, then rub it into wounds in the skin made with a thorn (or something else sharp) and you end up with crosses, parallel lines and other assorted dots.

Add to this a fatal head injury and a whole lot of ice and you’ve got the life story of Ötzi. This Bronze Age man lived around 3300 BC and came to a sticky end in combat high in the Italian Alps, before being preserved in ice until the early 1990s, when his body was found by hikers.

It was a remarkable find in itself, but for those interested in body art, the iceman had particular significance. His body was marked with more than 50 crude tattoos (created with the ‘soot' technique) placed over what we now know to be important acupuncture points. Was it medicinal? Decorative? Religious? We’ll never be sure, but Ötzi’s art showed the world that tattoos have been around for longer than was previously believed.

While Ötzi is certainly the oldest mummified human to bear tattoos, he is not the only one that has been discovered. Several Egyptian mummies (all female) dated to around 2000 BC have numerous dots tattooed on their bodies, which some scholars believe to be protective charms to help them during pregnancy and childbirth.

What is really interesting is that tattooing sprung up in unconnected parts of the world and developed over time, picking up different degrees of cultural significance along the way. For many tribal societies, such as those in Samoa, Aotearoa (the Maori name for New Zealand) and the Pacific Northwest, tattooing was an important ritual that lay at the heart of their culture.

Tattoos helped identify the wearer’s tribe, even their role or rank within society. Anyone skilled in reading the complex symbols could even trace a person’s tribal lineage through their markings – the Maori tā moko facial tattoos are a good example of this. There was also a military function of the tattoos, which could denote the number of kills a warrior had attained or act as a potent distraction in battle. Tattooed Tongan warriors would deploy their ink as a body-borne shock-and-awe tactic, intimidating their enemies and putting them off balance long enough for their spears to do their work.

For other cultures the process of getting tattooed was just as significant as the design. Depending on your tribe, you could have faced sharpened bamboo needles being pushed into your skin, having the designs carved into your features by a chisel made from albatross bone, or even the Samoan au: a miniature rake with sharp bone teeth that was dipped in ink and hammered into the skin.

These tattoos were created as part of a ritual that could last several days and were part of the journey towards adulthood. There was no numbing cream either, just just had to grit your teeth and receive your tattoo with no complaints. It was painful, bloody and lengthy, as tattoos could often cover a large part of the body, starting at the hips and sweeping right down to the knees. On the flip side, once the tattoo was completed you were considered mature and were allowed to speak to adults. So, not all bad then…

This post is a modified extract of text from our stunning book, Tattoo Art. Packed with detailed images of a variety of tattoo styles worn proudly by their owners, this title will educate you about tattoo art and dazzle you with incredible photography. To take a closer look at the book, click here.