Rounding off our look at some of the most legendary jazz albums, we turn to “the Prince of Darkness” himself, Miles Davis. Considered one of the great innovators of the genre, Davis is credited with being one of he first musicians to play hardbop jazz. King of the trumpet, few jazz musicians have come close to the influence on music that Davis has had both inside and outside of the genre, and we couldn’t have made this list without making sure to include Kind of Blue. 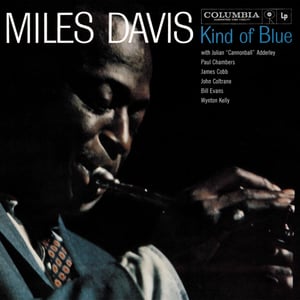 Born in Alton, Illinois, Miles Dewey Davis III (1926-1991) would pick up his first trumpet aged nine.  The history of post-war jazz tracked the musical development of Miles Dewey Davis III so closely that it is tempting to see the trumpeter as the orchestrator of each of the most significant stylistic shifts of the era. Other than the development of free jazz, Miles seemed to trigger a new seismic shift in the music with each passing decade. Unsurprisingly, the reality is inevitably less simple, but there is no question that if Miles did not initiate successive revolutions, he was consistently in the frontline of their development and popularization.

Over the course of his career he would record over 50 studio albums and was a pro at keeping on top (or in front) of what was cool, in and on the button. After his death in 1991, he was inducted in to the Rock and Roll Hall of Fame and is recognised as one the key figures in the development and the history of jazz.

You can read more about the life and times of Miles Davis on Flame Tree Pro!

Rather like Davies himself, his chosen instrument has endured many musical revolutions and styles. As one of the oldest instruments we have records of, the trumpet has a history longer than most. Originally without valves, the trumpet was contorted in to all different shapes so as to make the instrument much more wieldy without sacrificing its musicality and tone. It was only in the 1820s that instrument would see valves implemented in its design and this development lead to its expressive nature, making it perfect for jazz. The trumpets journey through the 20th century is defined by its involvement in jazz and its no surprise that several key musicians in the genre are famed for their skills in the instrument.

Learn more about the history of the trumpet on Flame Tree Pro!

The Backdrop for Revolution

In a career with so many recordings, both studio and live, choosing just one Miles Davies record is quite the task. There was a temptation to go for Bitches Brew due to its interesting sound that was ahead of its time. It was full of cool and complex production but, for almost the opposite reason, Kind of Blue could not be ignored. While some albums are extraordinary for their complexity, Kind of Blue shows you how much can be done with a small ensemble and simple chord progressions. It is an album that shows how a collection of talented musicians can be far greater than the sum of their parts. And make no mistake the musicians were all very talented. Each musician went on to successful careers in jazz, with “Cannonball” Adderley and John Coltrane probably making the biggest waves.

In the mid fifties Davies was growing dissatisfied with the direction bebop was taking. It was his opinion that rather than highlight one’s talent, these fast paced and ever more complex chord changes were shutting down the space for creativity. The smooth and fluid sound that we hear on Kind of Blue plays off of both this more stripped back approach and a new developing type of jazz; modal jazz. Without getting too technical and putting anyone to sleep, the music theory of modal jazz could be explained (and drastically simplified) by saying that it moves away from tonal scales and instead utilises musical modes. This essentially means that, while still having a root note (or a “home”), the musical progression is not structured around a major or minor tone but a mode that flows between the two or with indifference to the two. 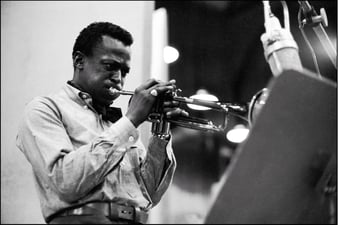 Davies didn’t invent modal music by any stretch, there are clear examples from composers like Debussy, but he is credited, along with his close friend George Russell, for bringing it to the forefront of jazz. The best way to look at the practical difference between the two would be to imagine it as a taxi ride. Tonal jazz follows the set chords and rules and it will get you to the end of your journey in a similar way each time. Modal music doesn’t have set bars or durations and it has no desire to get to its conclusion in any particular time. It will still take you home, and return to its “root”, but you don’t know which roads it will take or what you might find on the way. It is clear what this offered jazz, and more specifically Davies. Russell’s work on modes inspired Davies to embrace this more free form expression that he felt bebop was shutting down.

If you’re interested in Davis’ journey with modal jazz, check out this video about the creation of Kind of Blue.

A year before Kind of Blue, Davies released Milestones in which he tried some of these modal jazz ideas. It was extremely popular and he decided to make a whole album dedicated to it. With some of the greatest instrumentalists of the time, 5 “scenes” and 45 minutes, Kind of Blue went down in history as one of the most revolutionary and popular jazz albums in history. It’s status as a legendary album is cemented just the fact it was biggest selling jazz album of the era, but the effects it has had on both jazz music and wider popular music is immeasurable.

If you have never sat and listened to Kind of Blue then you should fix that as soon as you can. Quincy Jones once said that he played the album everyday. That might be a bit much, but you should definitely give it a listen at least once. You can check it out here.

It should be said that listening to one Miles Davis album won’t go very far in highlighting his influence and talent. Kind of Blue is an interesting place to start but moving through his catalogue with cuts like Sketches of Spain, and then into his 70s work like Bitches Brew and In a Silent Way would certainly provide a more fleshed out view of his work. I would also recommend Doo-Bop, his last album. It’s not his finest work, and it didn’t meet a great critical reception, but it does highlight where he was trying to take jazz trumpet at that time. Retrospectively we can see this sound cropping up in certain sub genres of rap across the past 25 years, highlighting the future thinking ability that Davis will always be remembered for.

You can check out all of our legendary jazz albums blog posts here!