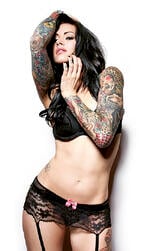 Tattoo art, like most forms of art, covers an eclectic range of styles, subject matter and messages. Of these sub-categories, Old School is one of the most instantly recognisable. The clear lines and iconography relevant to sailing lore have evolved into a popular style for those with a love of inked skin. Conversely, style has evolved on the other end of the spectrum into what is being dubbed 'New School'. An anthesis to its older brother, New School tattoo art relies less on a rigid style and is more commonly associated with experimentation, natural colours and subtle messages.

Instantly recognisable from its thick blue-black lines, often coloured with a single block of red, yellow or purple, Old School tattoo art does what it says on the tin. The designs are usually large and eye catching, usually focussing on symbols that bear direct reference to the military, travel or popular culture. There is often no shadowing or gradient to the colour scheme, the image instead standing out starkly against the skin.

Sailors in the East 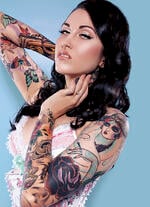 Famously, it is sailors who brought tattoo culture to the west. Already a key part of Asian culture, western personnel adopted the practice but applied their own unique flavour. For these men, tattooing was a cross between a tool of defence and an expression of desire. This led to the imagery of their tattoos being stripped back to their core essence: be it the anchors they worked with all day, or the images of pin-up girls they longed to see upon returning back home. These iconic images soon became a style of tattoo art which gained further popularity in the western world. 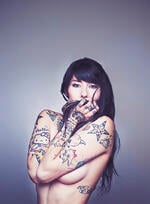 Some key images used in Old School tattoos, and their meanings are as follows: Anchors, this ancient symbol was supposed to help a sailor not to go astray and to stay true to himself. Swallows, traditionally for sailors who amassed over 5000 nautical miles, this bird also symbolises luck and a fortunate return home. Roses, in the West roses symbolize the same as lotus in the East: a special, pure love. Pinups, sailors were alone in their travels and projected their sexual dissatisfaction through tattoos; often sailors would also ink themselves with beautiful mermaids. Hearts, hearts are a symbol of romantic love in Western culture.

Norman Keith Collins, also known as "Sailor Jerry" (1911–73), remains one of the best known Old School tattoo artists. A roguish child, Collins learnt tattooing from a man named 'Big Mike' in Alaska after he hopped trains and ended up there. He learnt the hand-pricked method first before utilising the early tattoo machines of the late 1920's. He claimed to have practised on drunk kids who would let him develop his skill. After shipping out to Hawaii in the 1930's he developed his own collection of tattoos as well as sharing his skill with others. He is known for wearing plain white t-shirts that showed off the tattoos on his arms, and though famed for his artistry (and now, the eponymous rum brand), he remained a committed sailor his entire life. 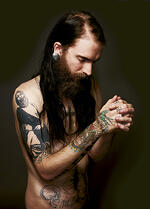 In contrast to the instantly recognisable style of Old School tattoos, New School styles are more loosely defined, and to some people simply refer to tattoos that are not Old School. Regardless of its exact definition, New School tattoo art is universally more free-form in terms of shapes and features more subtle colour tones. Often, wearers of New School tattoos design their own patterns and artwork, relying less on the iconography of Old School.

Margo DeMello, a tattoo scholar said “We construct these elaborate tattoo narratives to provide meaning to our tattoos, to make them seem acceptable, to make them seem deep and thought-out. The irony of course is that the tattoos they were taking had already been wiped out in their native culture because of colonialism.” source.

Walk Out of the Shadows

In the former Soviet Union, a trend emerged whereby individuals did not want to be inked in a way that resembled 'prison-tats'. This led to a wide array of styles too long to note, but key designs revolved around religion, intricate art working from well-known stories, and so on.

Interestingly, growing trends in New School tattoo art indicate a resurgence in ancient culture. Though having been practiced for centuries, Asian tattoo art has much more in common with the more recent developments in New School tattoo art. Emulating Buddhist monks and other spiritual figures, many westerners are appealing to these more artistic styles, favouring them instead of the Old School for their perceived deeper meaning.

Like with any art, tattoo styles are subjective and open to individual interpretation. Old School and New School exist parallel to each other amidst a myriad of many other art styles, which fluctuate in popularity. However, whichever way you look at it, tattoo art is a fascinating and truly artistic way to decorate oneself. With many similarities to fashion, this artform is also tied to print art and art history as a whole. 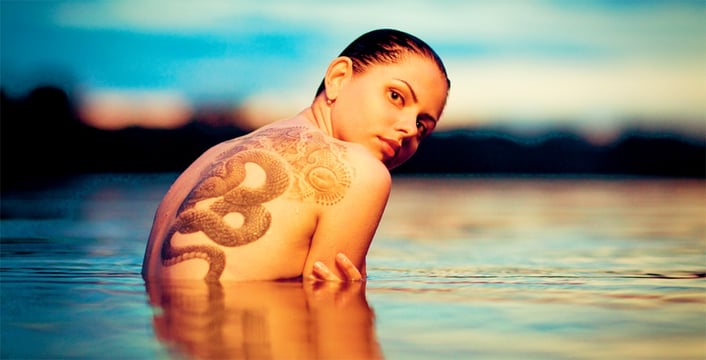