The Monk isn't afraid to set a scene before the action starts, and Lewis enjoys doing this by telling us who the characters pertaining to the plot are and what they represent. In the first chapter we learn plenty about a central character called Antonia, before the plot starts proper. Lewis creates a saintly, refined air around the quiet young girl – yet he covers her face too, leaving her beauty implicit at first. As she enters the church, she is surrounded by a huge throng of people, eagerly waiting to hear the words of the enigmatic, engaging and eponymous monk, Ambrosio. By focussing more on the characters Lewis makes you care about them from the get go, investing yourself into their various struggles.

Lewis's approach to narrative means that the gothic architecture and settings get less attention to detail as seen other gothic fiction books (see Frankenstein), but yet they exist in the world through their characters and their motives, somehow becoming conveyed by the turns of the plot. You don't suspect that the convent garden could be shrouded in anything but shadow, and the surface of the sepulchre anything but cold and hard. It's a fascinating and effective approach to storytelling. 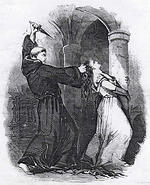 This choice benefits the narrative greatly, as this really is a novel about people more than anything else. The plot has twists, turns and many surprises as Ambrosio's duplicitous life is paralleled by the story of Lorenzo, a young cavalier who's pursuing a truth he believes masked by the church. Though The Monk begins to read as a dual narrative, the two stories become entwined towards the end and Lewis does this masterfully, with patience and intelligence.

Yet, for all his composure, Lewis knows too how to set his pages alight. Acts of sin are detailed in vivid colour and with unblinking attention to detail. The set pieces of this novel are really not something to be overlooked. They are gripping in the way that shocking acts often are, but Lewis astutely walks the line between reserve and indulgence. What stood out particularly for me were the rare appearances of deities and spirits. Lewis really defies convention in these moments, illustrating his characters in astonishingly vivid and truly unique ways. These visions juxtapose the novel's more sordid core very effectivley, leaving the reader unsure where the narrative will turn to next. This is one of many reasons The Monk excels as a work of gothic fiction, because instead of serving to shock, the sex and violence induce the reader to look inwards, at their own unspoken desires and fantasies.

At its core, The Monk is a novel about temptation. The central romance is doomed to fail, and the path Ambrosio takes, his steps guided by a sinister aide, lead only to one end: annihilation.