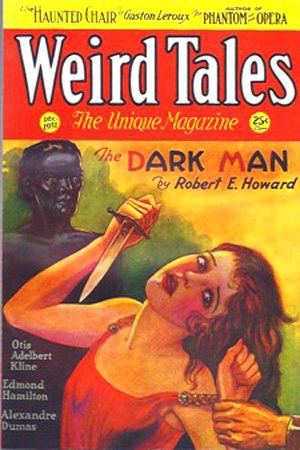 The Beginnings of Weird Tales

Weird Tales is a fantasy and horror pulp magazine that was first published in March 1923 featuring unique, fantastic and bizarre stories and art. It was set up in Chicago by an ex-journalist called J.C. Henneberger, who liked horror and the macabre. Many of the stories would feature elements of the uncanny, a Freudian concept of feeling that something is very strange and yet familiar at the same time. The sub-genre that was brought to life by the sort of stories featured in Weird Tales is now called weird fiction.

The first editor of the magazine was Edwin Baird. His run lasted only 13 months as, while Baird was hugely passionate about being the editor, he was not a business man. He acquired a lot of debt and the magazine very nearly went into bankruptcy, resulting in him being fired. Throughout his short time as editor he did however publish a great deal of hugely popular writers including H.P. Lovecraft, C.M. Eddy, Jr. and Seabury Quinn. 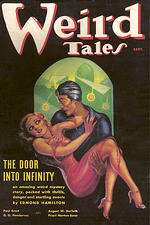 One of the most famous writers that Edwin Baird published was Seabury Quinn, who wrote stories featuring the character Jules de Grandin, which became incredibly popular. Jules de Grandin was created in 1925 when Quinn came up with the occult detective and found writing stories about him so enjoyable that he did it for 26 years, until 1951.

The stories were based around the French Jules de Grandin and his assistant Dr Trowbridge, who would come up against ghosts, werewolves, satanists and many other horrific creatures in New Jersey, where the stories were set. Much of the success of the stories came from the incredible revelations at the end, often involving the realisation that the supernatural was not in fact the cause and instead a human was behind the horrific events. The depraved, evil and insane characters drew huge amounts of people in to the stories as people were fascinated by the dark, disturbed personalities. The success of the short Jules de Grandin stories led to a novel-length story published in 1932, called The Devil's Bride. Many of Quinn's stories have been grouped together and published as collections.

Baird was also responsible for publishing H.P. Lovecraft, who at the time was not as popular as his contemporaries but is now considered one of the most significant horror writers of the 20th century. Baird initially accepted a lot of Lovecraft's stories and they built up a good relationship through these. At the same time Lovecraft was writing lengthy and frequent letters to (among others) Robert Bloch and Robert E. Howard. Many writers later thanked him for his mentoring and encouragement sent through his letters. Throughout his life he published stories in magazines and made some money for various literary work, but these did not provide enough money for him to cover his basic living costs. He often in fact wrote stories for free.

The largest payment he ever received was for his story 'The Dunwich Horror', for which he was offered the equivalent of $2800 by Farnsworth Wright, the Editor of Weird Tales at the time. It was one of the few, perhaps the only, stories of his that allows the protagonists to defeat the evil, or the monster at the end. The plot centres around Wilbur Whateley and his quest to secure a copy of a Latin version of the Necronomicon. 'The Dunwich Horror' is still a success today, as it is generally considered to be one of Lovecraft's best, and most terrifying, works.

While Baird was struggling to make money through Weird Tales he offered his job to H.P. Lovecraft, who declined despite his lack of success with his day jobs, because he could not relocate to Chicago. Lovecraft struggled with money for the entirety of his life and died not knowing the huge fame he would gain through his writing in the future. 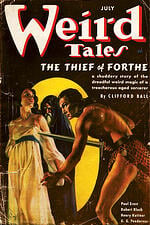 One of the reasons that the success of Lovecraft's 'The Dunwich Horror' was such an achievement for him was that Farnsworth Wright, who took over from Baird when he was fired, was much more picky about what he would publish. He rejected many of Lovecraft's tales, including some that are well-known today, such as 'At the Mountains of Madness' and 'The Shadow Over Innsmouth'. He also rejected 'The Call of Cthulhu' when he first read it, however he did publish it at a later date. It is thought that this selectiveness was in part down to a worry over the sensitivity of the topics after a bad reaction from the public when Baird published 'The Loved Dead' by C. M. Eddy, which mentioned necrophilia.

Farnsworth brought some new writers to Weird Tales. Among these were Robert E. Howard, with his popular Conan the Barbarian series and Tennessee Williams, who was in print for the first time in Weird Tales with his story 'The Vengeance of Nitocris'. The magazine still struggled financially under Farnsworth, even with the magazine's new business manager William Sprenger. And it never reached anywhere near the popularity of the most popular pulps – Weird Tales never sold more than 50,000 copies of an issue while Doc Savage or The Shadow would have at least 300,000 copies sold per issue.

In 1938 Henneberger decided to sell Weird Tales to William Delaney and two years later Dorothy McIlwraith was brought in to co-edit the magazine with Wright. After a period of declining sales, Wright departed from Weird Tales in 1940, and McIlwraith took over, bringing many new authors into the mix. Ray Bradbury, Theodore Sturgeon and Jack Snow were among the new writers who wrote slightly more restrained fiction than previous authors. 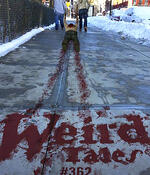 As with all pulp magazines, Weird Tales suffered during the Second World War due to paper shortage and afterwards due to competitors such as comic books, TV and paperbacks. The magazine stopped publishing in September 1954. After this there were several attempts to start it up again; the first was in the 1970s but this only lasted four issues. There were several more re-launches of the magazine that were slightly more successful but it is still waiting for its big comeback.

Weird Tales features in our fantastic Pulp Fiction Wall Calendar 2015 (ISBN: 9781783612741) that also includes some of the most-loved pulp fiction. Find it on Amazon here.