As the story goes, the Necronomicon was written by the 'Mad Arab' Abdul Alhazred and is over 1000 pages long. There are no known surviving copies, which may be a good thing!

The idea for the Necronomicon, as well as its fictional author, came to it's creator, H.P. Lovecraft, in a dream. As Lovecraft translates it, the Necronomicon means 'An Image [or Picture] of the Law of the Dead’ however, a better etymology would be 'A Book Classifying the Dead.’

Lovecraft only ever hints at the book, making the first reference to it in his short story 'The Hound' in 1924. In true Lovecraftian style, the Necronomicon appears in story after story, a whispered horror.'The events surrounding the Necronomicon take place behind closed doors, in sporadic fragments, with only our imagination fuelling our fears.

The true power of the Necronomicon lies within the mystery of the book itself. Lovecraft never wrote a copy, saying that not only did he not have the ability to write such a book, but also:

'-one can never produce anything even a tenth as terrible and impressive as one can awesomely hint about. If anyone were to try to write the Necronomicon, it would disappoint all those who have shuddered at cryptic references to it.' 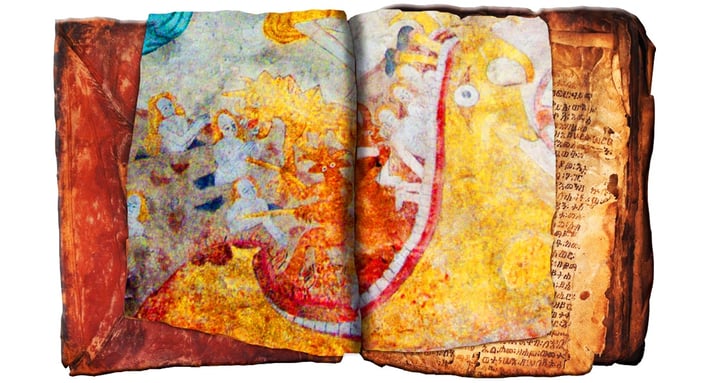 Lovecraft's works were based on the unknown, drawing upon the natural fear of what we don't understand. He scares readers by evoking creatures that remind us of just how powerless and weak we humans truly are. He reflects hints of ourselves and Earthly creatures within his monsters, making them even more terrifying. The Necronomicon became a reference point throughout his works as a place to draw upon that otherworldly fear.

Other Weird Fiction and horror authors referenced the Necronomicon in their works, keeping the myth alive long after Lovecraft's death. Close friend and writer, August Derleth continued Lovecraft's legacy with his contributions to the Cthulhu Mythos. Derleth combined his own imagination with Lovecraft's. He made references to the dreaded book, keeping the legacy alive.

The idea of this fearsome book also led to the creation of the Necronomicon Press, a small publishing house based in Rhode Island. Established in 1976 – almost 40 years after Lovecraft's death – the press printed works of endless Lovecraftian and Necronomicon inspired authors and writers.

Famous horror writer Neil Gaiman included hints to the Necronomicon in many of his works, and collaborated with Terry Pratchett to create the Necrotelicomnicon. As the name may suggest, it is a phone book for the dead. In Latin it is called 'Liber Paginarum Fulvarum' which translates to 'The Book of Yellow Pages'. This tribute to Lovecraft was meant to summon horrifying demons and other dark creatures, and was featured in a range of works by Gaiman and Pratchett. The two created a Lovecraftian circle of their own with their hilarious homage to the original. 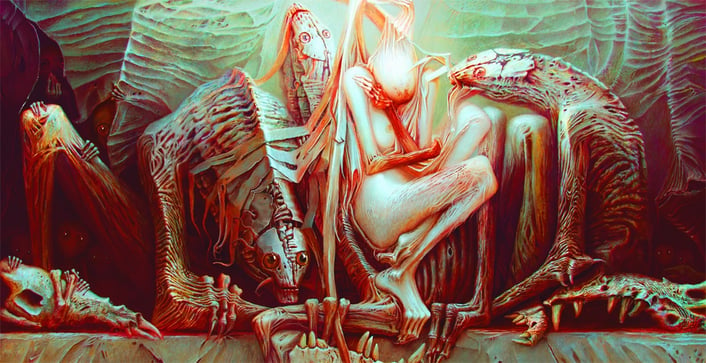 The Necronomicon appears in numerous Lovecraft-inspired works, not just limited to the printed page. It crops up in TV and film as well as video games. Famously, the 'Evil Dead' trilogy is inspired by the Necronomicon. It actually showcased the evil book, bound in flesh and inked in blood with a screaming face to top it off.

Mixed with other fictional and very real books, it is no wonder some believe the Necronomicon to be real. Lovecraft blurs the lines between real and fictional works, and the various allusions to the Necronomicon in fiction has caused a belief amongst some that there exists somewhere a true copy of the horrible book. A few writers capitalized on this belief, printing their own Necronomicons to satisfy the demand.

The most widely-read version is written by 'Simon'. It was first published by the Magickal Childe, one of New York's more famous occult shops, in 1977, in a deluxe leather-bound edition. Later, it was released as a paperback, reaching a much wider readership. The Simon version of the Necronomicon claims to be a Sumerian grimoire, translated from a Greek manuscript for us to read. 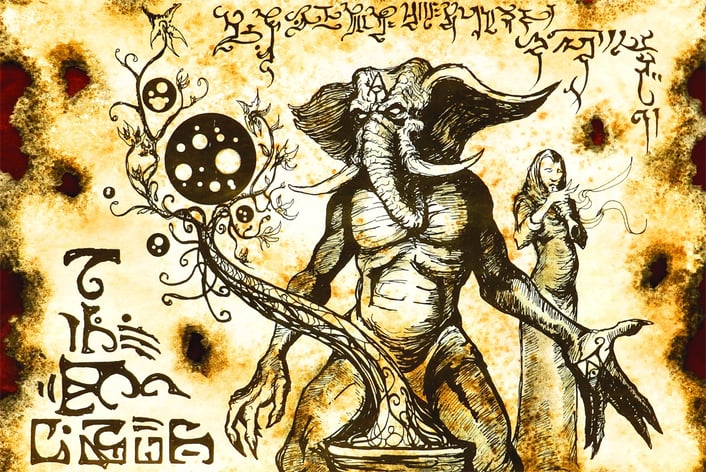 Swiss surrealist artist H.R. Giger produced his own version of the Necronomicon in 1978. Filled with fantastic depictions of Lovecraftian creatures, Giger's Necronomicon was an artistic tribute to Lovecraft's original.

Lovecraft assures us that his Necronomicon is fiction, however that does not stop some followers from believing in it's reality. Whatever the case, the Necronomicon is a powerful symbol of evil.

'The Necronomicon succeeds not because of its content, but because of the existential terror induced by its existence. It doesn't reassure. It doesn't tell us the universe is a safe, cozy place. It tells us we are just a speck of dust in a vast and alien cosmos, and lots of strange things are going on out there.'

To learn more about the Necronomicon, check out our book Necronomicon (ISBN: 9781783613205), where we feature incredible artwork by a range of artists and more information on H.P. Lovecraft and his mysteriously horrifying invention. You can buy the eBook now by clicking here, or pre-order the print title on Amazon here.