Taking the 'Man' Out of Superman v Batman | Superhero Movies

It isn't always immediatley obvious the way that figures of power, especially in a comic book universe, are defined by their gender. Dawn of Justice will feature among many others, Wonder Woman (portrayed by Gal Gadot). She'll even be getting her own feature film... eventually. But in 2015 should we still have to be told (should we, more to the point, care) what gender our heroes will be? The reaffirmation that heroes are men, be they bat, super, X, or otherwise seems a little redundant in a day and age where narrowing the gender divides in our culture is a serious issue.

I mean, look at the images below. In both of the male hero posters we also see the man decorated with his female love interest. That contrasts the image of Wonder Woman where though she looks powerful, she remains unadorned with the doe-eyed feebleness of a powerless man. Still need convincing? The Hawkeye Initiative is an excellent and funny little website that re-illustrates females in comics with men in their place. It really helps highlight our ignorance when it comes to what we consider acceptable dress for women and men in superhero comics.

Gal Gadot has spoken out against her detractors when it was announced she would play the princess of the Amazons. People were concerned that she was too slender. That her breasts were too small. This highlights not only how far removed comics' body expectations of women are, but also how staunchly fans will go to defend them.

It's a sensitive issue, because of course women should be free to look how they want. They can be skinny, curvy, muscular, flat-chested, etc, and though Wonder Woman's proportions certainly are extraordinary, that's not inherently the problem. Female heros exist on a much narrower spectrum of representation than men. Women are almost universally depicted as strong, toned, and buxom, which only becomes an issue when we don't see any variations from this recipe. On the other hand, though a similar argument may be made for men the truth is that they are far better represented. Aside from hugely muscular, stoic figures, you also have Spiderman (Talkative, slim); Mr. Fantastic (skinny, almost defined by his lack of muscles); and Professor X (elderly and paraplegic). The simple truth is that there is a lack of variety in the portrayal of female heros, and whilst it's no crime to make a woman sexy, the consistent lack of female diversity leads implies that powerful women have to be sexy.

When 47% of comic book readers are women, should we really still be arguing for a more egalitarian approach to sexuality? I mean, just look at Power Girls' absurd 'boob window'.

Ironically, one of the more female populated comics is X-Men. This popular franchise has a huge ensemble cast and so features a wide selection of women. That said, outside the principle characters such as Phoenix and Storm (both tall, muscular and beautiful) the other female students and 'weaker' heros are almost lost within a haze of generic background characters who have similar, shapeless physiques. Should we be worried that anyone who percieves their own body to be unremarkable should have this idea reinforced by the comics they read? 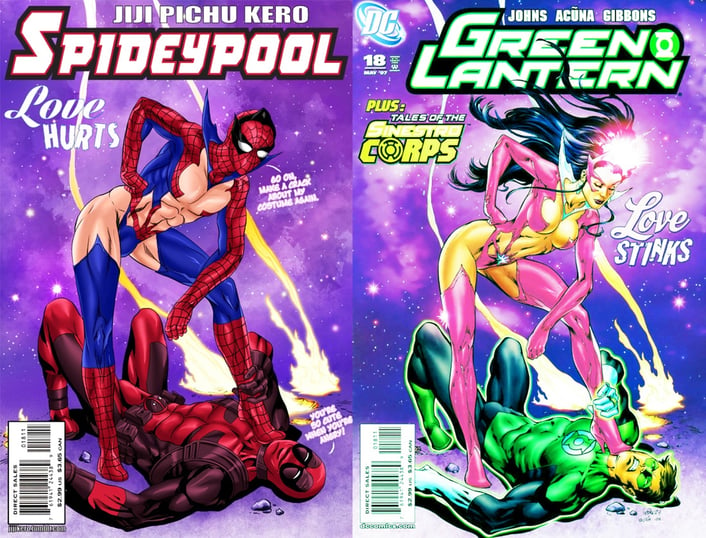 Joss Whedon's latest super-movie Avengers: Age of Ultron shows us an interesting dynamic between it's only female team member and (arguably) it's most maculine male hero (don't worry, no spoilers ahead). He addresses the other frustrating issue for strong female roles - the idea that inherent traits of gender seperate men from women, and that these differences make one inferior to the other. In more plain language: women have to inherit masucline traits when they appear strong, but 'typically female' characteristics such as compassion are seen as a weakness. The truth is neither stength nor compassion are intrinsically male or female. The emotions and actions of any person, be they ordinary or super, are universal, and too often women and men in comic books are too strictly limited by their tethering to gender norms. Men should feel no duty to conceal emotion and women should be able to be strong without drawing male comparisons.

So, in AOU Whedon seemingly tries to pull things towards a more central ground. We see that Black Widow and Hulk (Scarlett Johansson and Mark Ruffalo respectively) help one another in a really interesting way. Black Widow has a knack for helping Bruce Banner relax and revert back to his human state after 'hulking out'. What I like about this is that the play on typical gender roles. Here we see Banner's raging masculinity as a flaw, something to be saved from. Whereas Black Widow's 'female traits' of compassion and patience are essential in helping Banner. It's a small footnote in an otherwise grandiose superhero movie but it seems to be a sign of positive change. Helping show us that neither only men or only women can fight evil alone, but that they stand on equal ground and can help one another.

It's no wonder we see this from Whedon, who has spoken before about the misogny of the superhero film industry. He has certainly proven himself as champion of strong female leads, with iconic works such as Firefly, Buffy, and Serenity. He also bemoans how producers have cited the lack of quantifiable success from two infamous stabs at the genre, Elektra and Catwoman. Both movies suffered at the hands of critics and theatre-goers, putting off producers who found themselves with scathing reviews and low return.

Since then filmakers have tentatively touched their toes in the water, with female heros usually fleshing out the chorus in films like The Dark Night Rises (Catwoman: intial strength and guile surrendered to become the lead hero's love interest), X-Men: The Last Stand (Phoenix: becomes incredibly powerful but can't handle it and almost screws up everything), and Fantastic Four (Susan Storm: Passive powers such as invisibility and forcefields). It would be great to see female characters step into the limelight more as well seeing superheros shed their gender pronouns. There is obviously a problem of legacy here too, where most of the wold's most iconic heros were created in the past (when approaches to sexuality were slightly different) and these characters are still going strong today. I doubt any media team has the guts to rebrand Superman as 'Superperson', but fingers crossed that the next big superhero has an awesome name with no reference to their gender at all.

Interestingly, a quick read of our new book shows a trend towards gender neutral hero names (and team names) as we move towards current day. There is still a pertinent legacy of patriarchal hero names but things do seem to be moving in the right direction. If you want to see more stunning superhero artwork and learn about how the industry has marketed these movies, you should defintily take a look at our upcoming title Superheroes: The Fantastic Chronicle of Movie Posters.

What do you think? Is the issue as big I've made out, or should be we just enjoy comics for what they are - a bit of fun? Let your voice be heard in the comments below.