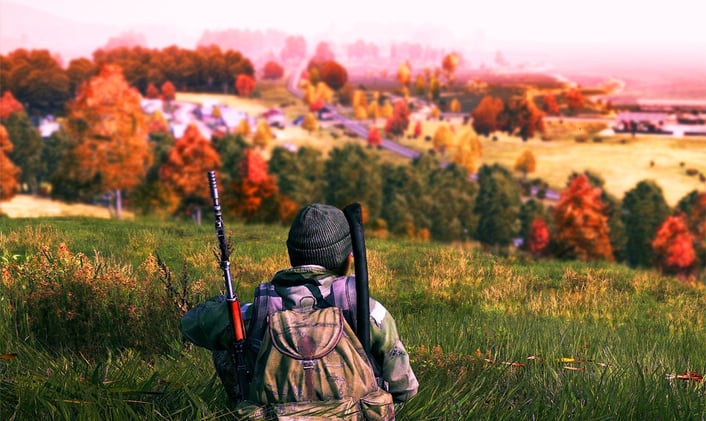 With the trending excitement about the new Day Z beta stage release coming soon, it is only appropriate that avid gamers have zombies on the brain. Thousands have patiently played the Day Z alpha for over a year, but now gamers are brought to the end of their rotten stretch of playing the incomplete experience. Before going into a personal lockdown or ‘zombification’ from the addictive habits of playing this game, it is highly suggested to pull out our popular book Zombies. Enjoy the stunning artwork whilst brushing up on your zombie knowledge – it might be the key to your survival in the Day Z beta.

Even as just a developmental stage release, Day Z alpha has been one of the largest surprise hits in the gaming industry. The adrenaline rush that video gamers receive when murdering each other during a virtual zombie apocalypse is, apparently, something to die for! The already highly popular game has spent longer in ‘early access’ than any other game on Steam Workshop, so when Bohemia Interactive announced the feature complete game was coming in next year at E3 2015, it was no surprise to hear the deafening audience response.

The development of this game has been so delayed because of the demand to make a unique game engine for the stand-alone release. Dauntingly, this will allow the ravenous gamers to host their own servers. Modifications and other player-driven content such as random, horrifying traps constructed by other players will have destructive repercussions. This will increase the amount of overall content available for the fully-fledged zombie survival experience. Could this game become anymore horrifyingly splendid?

Dean 'Rocket' Hall, the original creator of Day Z, in fact shares the same love for zombies as George Romero. They both decided to commit their lives to zombies after being so strongly affected by movies and other monster stories. Chinese folklore and gothic artists such as Edgar Allan Poe fed Hall’s fascination with the macabre.

However, Day Z’s initial incarnation was a mod for the military shooter game Arma II, and after working on the game for years the workload became too much to handle for one man. Brian Hicks, the lead producer of Bohemia Interactive, quickly became aware of the mod’s popularity and its potential for growth into a full-fledged title. After snapping up the rights and releasing the Day Z alpha in 2013, little has been announced for the title until this year’s E3 2015.

The key thing to know before being getting completely addicted to this game: be prepared for zombies! In the Day Z beta you will be dropped into an online world within the midst of a zombie apocalypse. Survival of the fittest, stealing, murdering, and killing the undead are the requirements for your survival. The game runs on realistic health and fatigue damage such as hunger and thirst, so the more you educate yourself about all things zombies, the better off you’ll be.

Our book Zombies is also perfect for anyone who loves other zombie games such as Call of Duty: Black Ops 2 (zombies mode), Resident Evil 4, and Telltale’s The Walking Dead.  Anything else? Well, yes actually. Your zombie knowledge may even help prepare you for other events such as the invasion of zombies on US college campuses in games such as Humans vs. Zombies, and the invasion of real-life live action zombie apocalypse games in Australia where one is put into a real warehouse with a team of six for over an hour.

If you’re a fan of all things zombie and you can’t wait until 2016 to play Day Z, why not take a look at our book on our website to help you pass the time. You can also view it on Amazon by clicking here.

Our most popular gothic fantasy posts: