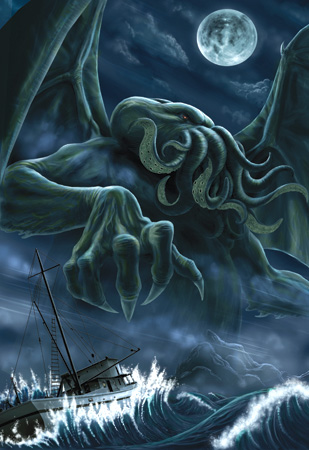 After the world went Pluto-crazy last month, NASA mission scientists recently named an area of the planet after the tentacled beast. Having his fictional creation become a household name on Pluto can be considered a huge achievement for Lovecraft as it demonstrates the extent to which Cthulhu has captured the imaginations of those from all walks of life.

We've spoken before about the Cthulhu mythos and its effects on society, but our focus was on the joint efforts of writers, artists and fans to develop H. P. Lovecraft's worlds and monsters (such as Cthulhu) into something bigger. Now, as Lovecraft's work becomes ever more widely known I for one have started to see Cthulhu crop up all over the place. And not always where you might expect to see him.

Like we said, if you know who Cthulhu is you're unlikely to forget him. He is a fearsome creature. Resembling something like a human/octopus/dragon hybrid. Lovecraft intended to create a monster that would be so terrifying and powerful that he would reflect the insignificance of humanity in relation to the wider universe. Probably not much fun at parties then...

You know what is fun at parties? Games. And guess where you might now find Cthulhu... yep, that's right.

Cthulhu Saves the World is a role playing game with one of the most unique protagonists out there. So far the title seems to have charmed the critics with its balance of retro graphics and fast, intuitive gameplay. As Cthulhu has been reappropriated for this game, the developers have made the wise choice of taking away some of his intensity. The absurd idea that a power-stripped Cthulhu would save anyone is enough to make fans of his origins smile. So for any die-hard fans tempted to explore this game, just don't expect anything too serious.

But if you thought that was weird, then brace yourselves. We're just getting started. Sticking with RPG's, but moving out of the computer and onto the tabletop, there is another game that Cthulhu fans may not see coming. If you love the malevolent sea-god for his uniform disregard for life then you might just find enough to in World War Cthulhu to make it worth your while. It's an intriguing title, no one can knock that. The game brings the terror of Cthulhu to the modern day, paralleling his immense threat alongside real-world conflicts, including the First World War, World War 2, the Cold War and an imagined World War Three. With an interesting mix of espionage thriller and deadly gods, it certainly sounds unique. Learn more about the game here.

You might wonder how Cthulhu's fame has spread so far and wide. Well, surely this is mostly down to his popularity with online communities. It's got to such a point that Cthulhu himself has become a fully-fledged meme! Read the 'Know Your Meme' listing here. Use of the meme basically boils down to either associating him with an something evil, whether it's something you did or a secret evil desire, or it's play on these evil themes, creating cute versions of the monster or lending his appearance to something innocuous, like this cat.

We are obsessed by Lovecraft's creation, so much so that we decided to make a whole book dedicated just to him. Cthulhu is packed with terrifying images and informative text all about the vengeful sea beast. Take a closer look at the title by clicking here. For Amazon, click here.