In this month's author Q&As we have Brian Pinkerton, author of The Nirvana Effect. Hear more about the novel, what draws him towards writing dark fiction and what his approach is to creating fictional characters.

What was your first novel?

I wrote my first novel when I was very young. I enacted the entire plot with the Fisher Price Little People Village and then wrote it all down as quickly as I could remember it. I still have that manuscript somewhere. It was written on lined, three-hole-punch paper. The pages were tied together with string. The title was “Deadly Adventure.” It even had a theme song.

What author has most influenced you, and why?

There are two writers who inspired me the most. Richard Matheson was an amazing storyteller with a knack for strange and surprising tales grounded in everyday people and settings. William Goldman influenced me through his writing style – brisk, exciting and full of personality. He was able to write successfully across a wide range of genres – including literary, thriller, western, romantic fantasy and historical. He wrote novels, screenplays and nonfiction, always in a compelling voice. Both Matheson and Goldman were very prolific and productive. They didn’t coast on one famous work.

I like building tension and suspense. It’s just fun to send readers on a rollercoaster ride. Sometimes it’s psychological, sometimes it’s more action-driven. Often, like in The Nirvana Effect, I inject some social commentary about the state of the world, creating allegories with real issues and events.

Sometimes I include humor, which naturally arises out of tense situations. It’s like a relief valve.

In The Nirvana Effect, the fear is technology taking over our lives, the explosion of personal data tracking our every move, the loss of privacy and our personal freedoms.

My first goal is to engage the reader emotionally, to take a sympathetic character and thrust them into a crisis that might include their first encounter with crime or violence. My lead characters are regular people: teachers, office employees, working mothers, construction workers, book store clerks… The lead character in The Nirvana Effect is a California landscaper.

My goal is momentum. I want the writing to be crisp, clear and easy to follow so your eyes glide down the page. I want the reader to be constantly engaged by a feeling of “What happens next?” I love ending chapters with cliff hangers. I love cross-cutting between two plot threads of suspense. I want to create situations where you wonder, “How will they escape?” “How will they survive?” “How can this bad guy be stopped?”

Why do you write?

It’s a compulsion. Over the years, it has become as natural as eating or sleeping. I just do it. Sometimes it’s to express a particular mood. It can be therapeutic that way. Other times it’s just the thrill of constructing an exciting story. I love to twist the plot and surprise readers. I suppose it all comes down to a feeling of accomplishment and creation. It’s a basic human need to make stuff, to leave our mark.

Thank you to Brian for taking the time to talk today about The Nirvana Effect. You can pick up his book from the 20th April. It will be available in paperback, hardback and ebook. Check out our website for details. 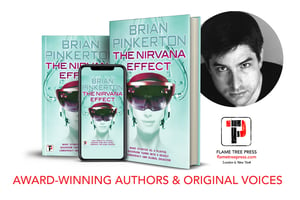 Brian Pinkerton tells stories to frighten, amuse and intrigue. He is the author of novels and short stories in the thriller, horror, science fiction and mystery genres. His books include The Gemini Experiment, Abducted (a USA Today bestseller), Vengeance, Anatomy of Evil, Killer's Diary, Rough Cut, Bender, Killing the Boss and How I Started the Apocalypse (a trilogy). Select titles have also been released as audio books and in foreign languages. His short stories have appeared in PULP!, Chicago Blues, Zombie Zoology and The Horror Zine.

Brian has been a guest author and panelist at the San Diego Comic Con, American Library Association annual conference, World Horror Convention and many other literary and genre events. His screenplays have finished in the top 100 of Project Greenlight and top two percent of the Nicholl Fellowship of the Academy of Motion Picture Arts and Sciences. Three of the scripts have been compiled in a collection, Unreleased.
Brian received his B.A. from the University of Iowa, where he took undergraduate classes of the Iowa Writers Workshop. He received his Master's Degree from Northwestern University's Medill School of Journalism.

Brian lives in the Chicago area and invites you to visit him on Facebook, Goodreads, Twitter and at www.brianpinkerton.com. Brian is also a cartoonist and his web site includes his deranged cartoon series, The Ruts.