In this month's author Q&As we have Daniel M. Bensen, author of Interchange, the sequel to Junction. Find out more about the novel, who he bases his characters on and hear all about the process involved in creating the aliens who appeared in the prequel.

A biologist struggles to preserve an alien planet, her relationship, and herself.

Interchange is about the evolution of biological systems – the growth that begins after survival and continues into the indefinite future.

The main character is a much less interesting version of a biologist friend of mine, who once asked me: "if we discovered a new world now, would be do a better job of conserving it than we did with the Americas?"

What was your process for creating the aliens in Junction?

If I started the aliens of Junction with biomechanics, my starting point for Interchange was ecology. I wanted an ecosystem in orbit, an ecosystem that had its own nature reserves, an ecosystem that used money. I studied Professor Scott Turner's udemy series on thermodynamics and life, and Foundations of Ecology, as well as papers on bacteria, artificial life, 3D printing, and a lot more. I sketched animals and plants, then shared my sketches and ideas with many very helpful speculative biology enthusiasts. The ideas never stopped evolving, any more than organisms do, but the snapshots you'll see in Interchange are gratifyingly complex.

While I was writing Interchange, I read up on the writing processes of my heroes Terry Pratchett, Lois McMaster Bujold, and Greg Egan. They all helped me find a way to live and write that works from day to day. Alastair Reynolds, Sue Burke, Der-Shing Helmer, Ed Yong, George Musser, Richard Fortey, and Brené Brown inspired the atmosphere, themes, and ideas of the book.

Make the process of writing work for you every day. Find a way to love the time you spend writing and getting better at writing.

In my office and the Starbucks on Gurko street, as well as various cafes throughtout Sofia. Occasionally on writing retreats in the Bulgarian wilderness.

I construct Spotify playlists for my books whenever I need to procrastinate. Here are the playlists for the beginning, middle, and end of Junction.

Since I've started loving writing, I find it harder to edit. I suppose learning to love editing is my next task. Perhaps my playlist can help. First, second and third.

Comforting. I know that my dumb mistakes stand a chance of not being seen by my readers. And it's wonderful to see the ideas grow deeper under the scrutiny of other people.

Aside from Interchange I'm working on the sequel to First Knife (the comic book I wrote with Simon Roy and Artyom Trakhanov) The Sultan's Enchanter (a Ottoman historical fantasy), The Centuries Unlimited (a time travel noir family drama), and Wealthgiver (an alternate history linguistic adventure). I also try to write the occasional short story or essay.

Thank you to Daniel for taking the time to talk today about Interchange. You can pick up his book from the 20th July. It will be available in paperback, hardback and ebook. Check out our website for details. 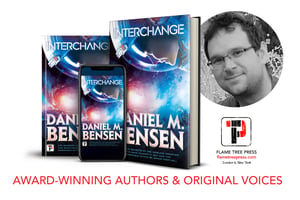 Dan was born in Chicago and has since lived in Maine, California, Montana, Japan, and Boston. He currently lives in Sofia, Bulgaria, where he teaches English and resides with his daughters, wife, and in-laws in the Balkan Tower of Matriarchy.