In the last of this month's Q&As with our July authors, we have Tim Waggoner. He talks the best and worse things about being an author, his inspirations and writing advice!

A woman’s dead brother is resurrected by a mysterious man who also transforms foul people in her life into inhuman monsters determined to kill her. She works to discover the reason for her brother’s return to life while struggling to survive attacks by this monstrous quartet. The mysterious man gives her a chance to make her brother’s resurrection permanent – if she makes a dreadful bargain.

What drives you to write horror?

I’ve always been fascinated by the darker side of existence. For some reason, it sparks my imagination more than anything else. We all have a dark side that whispers to us, a side that we struggle against and ultimately need to make peace with one way or another if we don’t want it to destroy us. In many ways, that’s probably the most primal story of humanity. Darker stories allow for greater conflict and deeper, more intense emotional reactions from characters.

What do you think makes good horror?

Give readers characters they care about. Horror stories aren’t about the monster. They’re about how people react to the monster. (Or in some cases, react to becoming monsters.) If readers care about your characters, if they empathize with them, then the threats these characters face will be meaningful to readers. If your characters are the equivalent of video game avatars with no personality, the threats they face will be meaningless to readers.

Also, avoid clichés. Horror is about the unknown, and once a specific type of character, threat, or story structure becomes too familiar, it loses its power to engage and affect readers – especially in horror. It’s important to me that I not only write a good story, but one that pushes me as a writer and (hopefully) stretches readers’ view of what horror is and what it can do.

Where do you get your ideas?

I get a lot of my ideas from interacting imaginatively with the world around me. I’ve always had a strong imagination, and I spend most of my time living in my head. I only seem to be present in the physical world! So if I see something that strikes me as odd, it sparks ideas. For example, a couple days ago, I found a large wooden stake in my yard. I know the stake was left by people doing construction on the street, but my imagination immediately thought: This was left by a vampire hunter during the night. This is how I think all the time, so whatever I’m doing – taking a walk, reading a news article, watching a TV show – I’m constantly responding to whatever stimuli are around me. I also get ideas from misperceptions. A word I misheard, or something I saw out of the corner of my eye that I mistook for something else. Once when I was driving home, I saw a woman in her front lawn. As I passed, I caught a glimpse of her face, and it looked as if she had the skull of some prehistoric beast for a head, with long, curved upper and lower fangs. I have to record these kind of details because I experience so many of them throughout the day that I’ll forget them if I don’t write them down. They don’t all become inspiration for stories, but a lot do!

Sometimes I write at home, but often I go out to a coffee shop. I like listening to the white noise of the crowd’s conversation, and I find that writing in the midst of life happening around me – people coming and going, chatting, working – is inspiring. There’s often a mix of busyness and calm energy in those places, and I find it both invigorating and soothing at the same time, and this combination seems to help me get into a creative mind space in a way other environments can’t.

Getting to live inside my head most of the time. I’d do that anyway, but writing makes it possible for me to take what’s in my head, give it concrete form, and share it with others – and that makes living inside your head seem at least somewhat socially acceptable! I also love dealing with narrative challenges and problems with each new story or novel. The overall process of writing – from initial idea to finished product – is an endless source of fascination for me. I’m sure that’s why I also love teaching creative writing.

What’s the worst thing about being a writer?

Always feeling like what you write isn’t good enough because it can never measure up to the ideal in your mind. We always fall short of our goals when we write. The question is how short. Rejection is hard, as are bad reviews, or worse – indifference when you write something and it sinks from view without seeming to make even the slightest impact on readers. The business aspect of writing can be demoralizing at best and soul-crushing at worst, but you have to try not to let it get to you.

Thank you to Tim for speaking to us about his inspirations and about his book They Kill. You can pick up this new FLAME TREE PRESS book, along with the other July releases now. It will be available in paperback, hardback and ebook. Check out our website for details.

Tim Waggoner’s first novel came out in 2001, and since then he’s published close to forty novels and three collections of short stories. He writes original dark fantasy and horror, as well as media tie-ins. His novels include Like Death, considered a modern classic in the genre, and the popular Nekropolis series of urban fantasy novels. 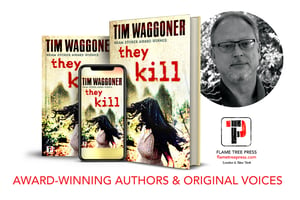 He’s written tie-in fiction for Supernatural, Grimm, the X-Files, Doctor Who, A Nightmare on Elm Street, and Transformers, among others, and he’s written novelizations for films such as Kingsman: the Golden Circle and Resident Evil: the Final Chapter. His articles on writing have appeared in Writer’s Digest, Writer’s Journal, Writer’s Workshop of Horror, and Where Nightmares Come From. In 2017 he received the Bram Stoker Award for Superior Achievement in Long Fiction, and he’s been a finalist for the Shirley Jackson Award and the Scribe Award.

His fiction has received numerous Honorable Mentions in volumes of Best Horror of the Year, and in 2016, the Horror Writers Association honored him with the Mentor of the Year Award. In addition to writing, he’s also a full-time tenured professor who teaches creative writing and composition at Sinclair College.

Make sure you check back in with the for more Q&As with the authors of our July releases!