In the second of this month's author Q&As we have Ramsey Campbell, author of Somebody's Voice. Hear what prompted the writing of the novel and advice for aspiring writers.

A crime novelist is commissioned to ghostwrite the memoir of a survivor of child abuse, only to find his sense of his own identity and memories undermined by the experience. Meanwhile the survivor’s own account proves to be less than entirely reliable, and figures from his past reappear to demand the truth…

The unreliability of memory and the fluidity of identity. Are we really sure of our memories and of exactly who we are?

What prompted you to write the novel?

A couple of years back a survivor of child abuse was interviewed on my local radio station (BBC Radio Merseyside) in a phone-in show. A caller commented that the lady had been very brave to talk about her experiences so publicly, and the presenter (Roger Phillips) responded that she was a very good writer as well. Now, since the book was ghostwritten, she wasn’t the writer, and this immediately started me thinking how such a confusion of identity might develop. Suppose the writer’s memories became increasingly entangled with the subject’s, and both proved to be unreliable? Somebody’s Voice was the eventual result.

Do you think you yourself have stolen the experiences of people unlike you to write the book, as the central character is himself accused of?

I don’t think so. Part of the point of the book is to question how authentic his account of someone else’s life can possibly be, and all the scenes in it supposedly from their viewpoint are actually written by him – so in that sense I haven’t tried to depict the experience of a transgender person, but just a version of their life written by someone who isn’t transgender. If anything, the book is commenting on that presumption and trying to show its effects.

All my characters are based on observation to some extent, but a character is very rarely drawn from a single real person. It’s more a matter of assembling a new person from traits borrowed from many, and some imagined traits too. What’s most important is that the characters should behave as real people might conceivably behave.

More like what, to which the answer is reality. I’m not aware of any direct influences, but since it’s a psychological novel, perhaps writers of crime fiction I admire may have been at my shoulder. I’d think of Steve Mosby and Alex North for the sinuousness of their complex plots, and Dennis Lehane for his commitment to showing the morally messy consequences of actions.

I’m up at my desk that looks towards Liverpool across the river, and I always see the dawn when I’m working here. Some writers prefer to face a wall so as not to be distracted, but I believe I draw energy from the view, not least the ever-changing sky. In another sense, though, the process can happen anywhere and everywhere, since while I’m working on a new tale my mind will be composing it even if I’m unaware of this. It can come up with an idea at any time, which is why I always carry notebooks – these days, the phone functions as one too – because otherwise the idea tends to get lost before I can write it down.

I haven’t plotted a novel in advance for many years – I gather material until the book feels ready to be started. I believe in letting the tale develop organically and surprise me as it does. The dark side of this is that I can find myself stranded far out in unknown territory with no idea how to proceed, but I trust the novel to rescue me – generally there’s material earlier on that proves to be the solution to where I need to go next in the story. It certainly van be hard to write, but more often it’s rewarding, even exhilarating. I’ve come to regard the first draft as a way of setting out what I need to work with. I’m increasingly ruthless at rewriting and enjoy it a good deal.

Thank you to Ramsey for taking the time to talk today about Somebody's Voice. You can pick up his book from the 22nd June. It will be available in paperback, hardback and ebook. Check out our website for details. 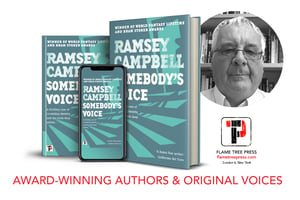