In this first of this month's author Q&As we have V. Castro, author of The Queen of the Cicadas. Hear more about the novel, who she based her characters on and who influenced her writing.

The Queen of the Cicadas is about the urban legend of La Reina de Las Chicharras – The Queen of The Cicadas. Milagros is a murdered farm worker on a Texas farm in 1952 who returns for vengeance with the help Aztec Queen of the dead. Fast Forward to present day, Belinda is a woman feeling empty and disillusioned with life. She returns to Texas for wedding held at the farm where the murder occurred. Her fascination with the legend which she heard as a change brings forth not just self-discovery, but the rebirth of Milagros and the Queen of The Dead.

Identity. The importance of knowing who you are in the world. It also discusses the complexities of self-hatred, race and motherhood.

There is a lot of me in Belinda and the Aztec Queen. I am filled with a deep sadness and rage. Both have guided both me good and bad decisions in life.

My family history. My great grandparents were farm workers. I also am influenced by my heritage. As a Mexican American woman, we are often left to stereotypes or ignored. I want to change that.

I want to specifically speak to people of color and women of color. Your voice matters even when it feels like you are screaming in the wind. Don’t hold back on your narrative because you feel it isn’t “enough” of one thing. Write for yourself and give yourself the freedom to express what lives inside of you.

Yes, we are not represented as much as we should be but if you give up things will never change. Be bold and persevere.

I wrote the book on my kitchen table because I have three children to manage.

I write to my children screaming and the dishwasher beeping!

Probably editing because I second guess myself a lot.

I like it because I always second guess myself. I wish I had a professional team for my first book because it was a huge jump for me, and the character stands for all that is important to me as a Latina.

I have a ton of stories on the go at once. First, a Latinx space military horror. It is my dream to write an Alien or Predator book. This book is a homage to Vasquez and possibly a way to make that happen. The main character is Leticia Velasquez. She is a space warrior with one robotic arm and bandana around her forehead. Her brother is an executive for the Opus corporation and has landed another job in space after a botched military rescue left her with one arm and her friend with one leg. The new gig seems easy until, the creature that took her arm is back. But its not just the humans exploring space. Another race watches and is intent on keeping this known universe free of the ancient creatures hungry for destruction.

Maria The Wanted series: Book 1 is out with high reviews. This was self-published. I want to continue the saga of Maria as she fights with other vampires for the fate of the world. Book 2 will give a new version of the vampire and human origin story and the return of Lucifer.

I also have a spin-off for the character Vlad.

Night of the Box Jelly: An eco-horror (think Latinx Jaws) set in Portugal. A Latina scientist who studies venom after her brother died handling a rattlesnake in a religious ceremony is called to Portugal after sea life is being fished out of the water with strange wounds. Things turn scary when the same begins to happen to humans. Chemicals leaching from plastics have caused box jelly fish to become more toxic and aggressive. They are hiding and thriving in floating islands of garbage in open water. Even the predators of the sea are not safe.

La Llorona the generational curse: I use the folk tale of La Llorona to explore post natal depression. Alejandra doesn’t want to live anymore. The pressure of motherhood has left her devoid of life. But there is something darker at work, something evil that has been haunting her bloodline and other women for centuries. Can Alejandra defeat the generational curse in the form of La Llorona? What if what we know about the crying woman is all wrong. What if it is really a demon who preys on a mother’s love to devour children.

Luchadora: A horror novel based on Mexican female wrestlers. The antagonist is a male wrestler who is really a creature from Aztec myth. He is undefeated and works for the local gang who refuse to give the female wrestlers a fair shake in the ring. Dora is a single mother willing to put her life on the line to defeat the gang and the masked wrestler.

Truck stop is shaping to be a novella, I think. It’s pure body horror. A woman found in the Sonora desert as a baby has left the  Catholic girl’s home for the city. She finds herself working as a sex worker at a truck stop. But she is no ordinary woman. Within her lives something wonderous and dark. She soon finds out she is not alone in this world. When she finally feels like she had found some sort of normal life, her and those like her are threatened by an evil that has plagued generations of humans. They need a new target and Sonora is on that last.

Thank you to V for taking the time to talk today about The Queen of the Cicadas. You can pick up her book from the 22nd June. It will be available in paperback, hardback and ebook. Check out our website for details. 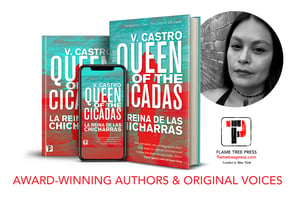 Violet Castro was born in San Antonio, Texas to Mexican American parents. Since Violet was a child, she wrote short horror stories and was always fascinated with dark fiction beginning with Mexican folklore and the urban legends of Texas. At eighteen Violet left Texas for Philadelphia to attend Drexel University where she received her Bachelor of Science in Political Science and History.

Violet now lives with her family in the U.K. writing and travelling with her children. She tries to return to the US twice a year to see her parents, three sisters and extended family.