In this month's author Q&As we have Tim Waggoner, author of Your Turn to Suffer. Hear more about the novel, who he based his characters on and a few ideas he has for upcoming books!

A woman is harassed by a sinister group calling themselves The Cabal. They accuse her of having committed unspeakable crimes in the past, and now she must pay. The Cabal begins taking her life apart one piece at a time – her job, her health, the people she loves – and she must try to figure out what The Cabal thinks she’s done if she’s to have any hope of answering their charges and salvaging her life.

How do we come to terms with living in a universe we have no control over and that at times seems to actively be working against us? Do we ignore it, accept it, submit to it, or fight back? And whatever path we choose, what will be lost to us in the end?

There are a number of authors whose dark fantasy has influenced my own: Ray Bradbury, Charles deLint, Clive Barker, Stephen King, Neil Gaiman, Caitlin R. Kiernan, Jonathan Carroll . . . but one of the strongest influences is the work of Franz Kafka.

I’m working on a horror writing guide called Writing in the Dark. Aimed at both beginning writers and established pros, my ultimate goal with this book is to help people write kick-ass horror regardless of where they’re at in their careers. After that, I’ll start on my next novel for Flame Tree!

Thank you to Tim for taking the time to talk today about Your Turn to Suffer. You can pick up his book from the 23rd March. It will be available in paperback, hardback and ebook. Check out our website for details. 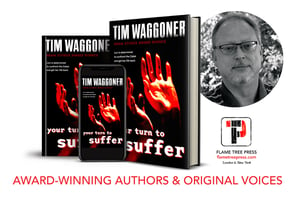 Tim Waggoner’s first novel came out in 2001, and since then he’s published close to forty novels and three collections of short stories. He writes original dark fantasy and horror, as well as media tie-ins. His novels include Like Death, considered a modern classic in the genre, and the popular Nekropolis series of urban fantasy novels. He’s written tie-in fiction for Supernatural, Grimm, The X-Files, Doctor Who, A Nightmare on Elm Street, and Transformers, among others, and he’s written novelizations for films such as Kingsman: the Golden Circle and Resident Evil: the Final Chapter. His articles on writing have appeared in Writer’s Digest, Writer’s Journal, Writer’s Workshop of Horror, and Where Nightmares Come From.

In 2017 he received the Bram Stoker Award for Superior Achievement in Long Fiction, and he’s been a finalist for the Shirley Jackson Award and the Scribe Award. His fiction has received numerous Honorable Mentions in volumes of Best Horror of the Year, and in 2016, the Horror Writers Association honored him with the Mentor of the Year Award. In addition to writing, he’s also a full-time tenured professor who teaches creative writing and composition at Sinclair College.