In the next of this month's Q&As with our November authors, we have Andrew Post, author of Mondo Crimson. He discusses some of the themes in the novel, who he based his characters on and what he's working on now!

Mondo Crimson is about Melanie, a young woman who, after making some bad investments, has to work nights as a car thief. Unbeknownst to her, her employer, Felix, doesn't just traffic in stolen cars, but the ending of human lives using the roster of professional killers. One of whom is Brenda, part-time mom and part-time fixer. And when Melanie is assigned to steal Brenda's car, and the two nearly kill each other, it's not until they realize that they both work for the same man they begin to question: why? It turns out Felix, along with a handful of his rich friends, have taken up the habit of drinking human blood to get high. The street name for this drug: Mondo Crimson.

Addiction, capitalism, and double lives. Addiction in the way that Felix has gotten hooked on Mondo Crimson and his number one, Brenda, is addicted to maintaining an upper middle-class lifestyle (funded by carrying out professional hits). It may not be very subtle, but there's a part near the middle where someone equates what's happening in this universe with mega corporations slowly draining the world as a slow "bleeding out," something that Felix does both literally and figuratively as both someone who partakes of Mondo and is running his own mini mega corp with his contract killers. And each one of the characters holds up a guise of who they would like to be but aren't. Felix was once a trusted face in the world of criminal law around Chicago. Melanie's girlfriend has no idea she works for such a terrible man and, because of that, is essentially living life as two people. And Brenda's husband and three young girls have no idea Mommy kills people to keep them stocked in Pop Tarts.

Not directly, but aspects of one character, Merritt Plains, are based on those of some people I personally know, or knew. All of them are me, really. I, unfortunately, sometimes suffer from the keeping-up-with-the-Joneses syndrome Brenda suffers from. I have the hopeless optimism "everything will turn out okay if we just work hard enough," the same as Melanie. That's the fun thing about being a writer; you get to fragment yourself into these tiny pieces and scatter them and make those observations and feel these feelings, albeit from the eyes of your characters.

My favorite crime writers, Elmore Leonard, George V. Higgins, and Jim Thompson. To me, they're the trifecta.

Be patient and be polite. Patience, not only for yourself as you write and the ideas coming to you at their own pace, but patience with the publishing industry itself. I've submitted work only to get a rejection letter years later. These things, as they say, take time. And being polite, that's always good to do. Publishing is a much smaller world that most people realize and everyone knows each other in some shape or form. So, if you tick off one editor, odds are you'll be a known quantity with others. So, my advice: be nice!

Well, I started it several years ago, but as a screenplay, originally titled Cut and Run, back when both leads were male. My other Flame Tree novel, Chop Shop, started out the exact same way--as a screenplay, with both leads being men. Then, as a novel, with the characters as women, it suddenly worked so, so much better. I wrote Cut and Run in a house I used to rent. Then when my wife and I bought this place we're in now, this benevolently haunted house built in 1880, I wrote Mondo Crimson, as a novel, there at the dining room table. So, from start to finish, a process of about five years. Which, for me, is fast.

It depends on what kind of scene I'm writing and where I'm at in the plot. For intense scenes, I like intense music. And when I'm first starting out on a manuscript and I'm still trying to establish its world and its mood, I also like to have music on then. I usually end up associating a book with one particular song by the end, which can be useful if I needed to take time away from it: I'll just pop on the song and be right back there in that world. For the day to day getting-it-done part of writing, it's almost always atmospheric ambient stuff. If I'm down in the salt mines of working on plot mechanics, I like to keep it silent. Even though I'll still wear headphones just to muffle out any sound going on around me--the whispering of restless ghosts, the hum of the fridge, that sort of thing. And when working on the last chapter or final paragraphs, and especially the final line, I like absolute silence for that.

I struggle with both. For anyone who's read my stuff, they know I'm a very dialog-heavy writer. For each character to sound distinct and become immediately recognizable to the reader even without speaker tags, it takes a lot of work. I like to think I make it look effortless, but it's sadly not. And the way ideas come to me, not by choice, I'll incubate plots or individual scenes or entire characters for sometimes upwards of a decade. Which can be frustrating because I've tried forcing an idea into shape only for it to crumble apart like a gingerbread house. And as for editing, I have a real hard time with killing my darlings--I'm sure my editors would agree. And because us writers tend to see what we think we wrote. Not so much just having objectivity about the manuscript generally, but just being too close to it and too familiar with it to see it other than we think is there. So, it can be easy to get annoyed with yourself when you've re-read the thing eight hundred times only for an editor to be like, "This is supposed to be its not it's."

An absolute blessing. I love to be edited. Especially when the editor is passionate about the story and has become invested in not only the plot but the book's potential. In cases like that, sometimes you'll get notes that speak to how the editor has considered something you never thought about, or they'll ask really good, tough questions. I think a lot of writers--greenhorns, established, doesn't matter--mistake editors as censors or feel as if they only want to tell them how they're doing it wrong. Both are patently false. It's a privilege to be edited, and a good editor's main goal is to make you, as the writer, look your best. I mean, it's better to hear something about a paragraph being funky from them than seventy-five Goodreads reviewers pointing it out, right?

I'd pitch it as Honey Boy meets The Ring meets Eight Millimeter. Set in Los Angeles in 1998, it's a story about a washed up former child star who now, at 28, works at a show much like America's Funniest Home Videos as a screener, which is a person whose job it is to watch every submission--hundreds of videos a day--looking for material that they can run on the show. One day, a videotape comes in that breaks the former child star's mind--and that of anyone he shows the video to. Like most of my stuff, it'll be a mix of crime and horror, and heavy on both dialogue and bloodshed. Should be a good time!

Thank you to Andrew for taking the time to talk today about Mondo Crimson. You can pick up his book, along with the other November releases now. It will be available in paperback, hardback and ebook. Check out our website for details. 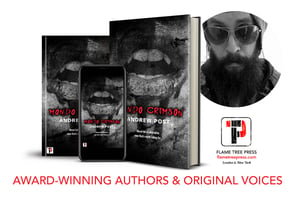 Andrew Post was born in Erie, Pennsylvania (imagine Eraserhead but in color). While he was honing his craft as a writer (those early stories were awful) he worked in a gift shop in one of the scuzziest hotels in the Midwest, he cleaned rental cars (also gross), he was a butcher (despite being a vegetarian), and in 2013 his first novel, the cyberpunk thriller, Knuckleduster, was published. No one really seemed to care much but he kept at it and has since published a handful of other works to varying degrees of resulting public interest with a few seeing translations and one almost became a movie (that lit agent has since been fired).

For Chop Shop, Andrew was inspired by the (early) films of Quentin Tarantino, Guy Ritchie, and Martin Scorsese, as well as the deliberately over-the-top horror films of the 80s like Peter Jackson's Braindead. That was the goal with Chop Shop: a comedic crime caper with buckets of gore.

Andrew lives in a sleepy river town in Minnesota where he may or may not be planning aquatic "accidents" to befall the many other authors who live in the area and he has been mistaken for Rob Zombie on no less than ten separate occasions.