In this month's author Q&As we have J.D. Moyer, author of The Last Crucible. Find out more about the novel, what influenced the story and what he's working on now! 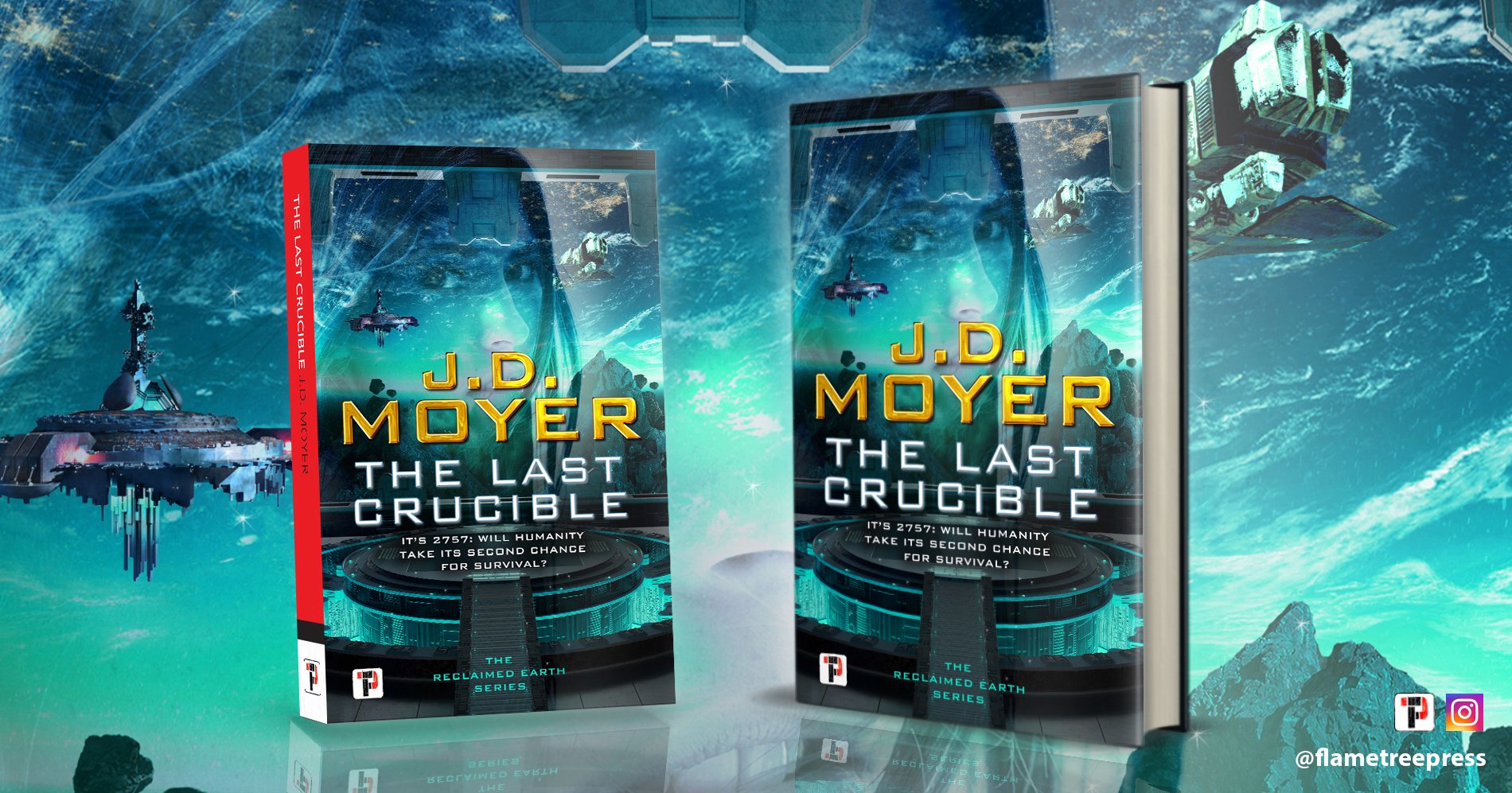 What inspired you to write the Reclaimed Earth series, and The Last Crucible in particular?

Writing this series allowed me to explore the fantasy of a second chance for humanity. Our planet has recovered from overpopulation due to a conflagration of bottleneck events, with the DNA of civilization (knowledge and culture) preserved both in orbiting ringstations and isolated Earth communities. The series protagonists struggle with clashing cultures as humanity has radically diverged into micro-societies with such different value systems and technological capabilities that they appear alien or magical to one another.

These surviving societies are functional and fair, more like utopias than dystopias, but haven't solved the problem of how to deal with ambitious tyrants who rise to power via their wits and charm. Any population group has its share of sociopaths, and these individuals tend to easily climb existing hierarchies with ruthless cunning.

Maro, the primary antagonist of The Last Crucible, was the first character that I got a clear picture of. His psychologically invasive Ancestral Realism experiment sets the plot in motion. Writing under the shadow of global populism and nationalism motivated me to explore sociopathy, hubris, and to revel in the downfall of a tyrant who runs roughshod over the rights of the less powerful.

What are the underlying themes of The Last Crucible?

One important theme of The Last Crucible is trauma and recovery. Jana struggles with existing in a body she doesn't identify with. Katja is traumatized by her earlier experience of being a Crucible host, being physically and mentally enslaved, and is willing to endanger herself and others in order to prevent another Crucible enslavement. Tem has limited self-awareness but slowly realizes how his own trauma of growing up as different/other has shaped his personality. Cristo and Filumena are both traumatized by Ancestral Realism but react and recover in different ways.

The broader theme of the Reclaimed Earth series is human evolutionary divergence, both genetic and cultural. The Last Crucible focuses on the value of tradition and ancient cultures as a subtheme. How much should we revere and preserve of the old ways, and how much should we throw out in light of new evidence, methods, and cultural moods? Maro fetishizes tradition and wants to capture what he believes is a historical state of consciousness, an ephemeral state that he believes will help him understand his own ancestors. But the thing he is chasing doesn't exist; all cultures and peoples are constantly evolving. He is chasing a ghost.

Physical identity is another theme I explored. Jana is disassociated with her body, even to the point of being unafraid of physical injury or death. Without giving too many spoilers, she gets multiple opportunities to experiment with somatic variety.

Not directly, but I've been influenced by young people I've met who have experienced gender dysmorphia, which informed Jana's disassociation from her birth body.

In terms of egotistical, self-absorbed, power-hungry villains like Maro, there is no shortage of real-world examples from which to draw inspiration. I'm fascinated by people who are highly intelligent but also so in love with their own ideas and convinced of their own inherent genius that their hubris blinds them to their occasional idiocy (Elon Musk comes to mind, as does Richard Branson).

Which character caught you by surprise?

I had no intention of doing anything with Aina, Maro's cybrid assistant. But she thrust herself into the plot almost immediately, and writing her POV chapters was really fun. Her consciousness undergoes a radical shift with the Bohm upgrade, and her journey into autonomy took on a life of its own.

Don't wait for inspiration or the muse. Don't worry about talent or being good enough. Don't wait for anyone to give you permission.

In my home office/music studio in Oakland, California. And sometimes at the dining room table.

Writing gets easier the longer I do it. Editing is more challenging – I absolutely need my early readers to point out inconsistencies, boring bits, and other problems with the work.

This will be my third book working with Don D'Auria, and I am 100% certain that his insights and guidance make my novels significantly better.

I've started a new series that takes place in Mumbai, involving a conspiracy between the Vatican and the Order of Free Gardeners to create intelligent arcologies constructed by genetically-engineered cephalopods.

Thank you to J.D. for taking the time to talk today about The Last Crucible. You can pick up his book from the 21st of September (and the hardcover from the 19th of October). It will be available in paperback, hardback and ebook.

Don Sakers reviewed The Sky Woman (Book 1 in the Reclaimed Earth series) in Analog SF, calling it: ‘A well-told story reminiscent of Ursula K. LeGuin or Karen Lord.’ Compelling Science Fiction described The Sky Woman as a ‘wonderfully entertaining debut novel.’ The Icelandic Cure was called ‘a strong, thoughtful story that inspires hope for the future’ by Publishers Weekly.