We're delighted to announce the full list of successful submissions for the first two of our 2017 Gothic Fantasy deluxe anthologies: Lost Worlds and Supernatural Horror. These join our growing collection of popular hardcover anthologies, which so far include the titles: Dystopia Utopia, Swords & Steam, Crime & Mystery, Murder Mayhem, Horror, Ghosts, and Science Fiction.

We received an overwhelmingly positive response to our call for submissions this year, making narrowing down the final selection a difficult but immensely rewarding process. The Supernatural Horror volume, which attracted over 900 submissions alone, brings an array of nightmarish monsters, sinister happenings and creepy tales, while Lost Worlds carries with it the thrill of unexplored lands and mysterious civilisations. We are proud to be publishing this selection of exciting contemporary writers alongside works by iconic authors that have helped shape and inspire these genres.

An Echo of Gondwana by Mike Adamson

Tears of the Gods by Sarah L. Byrne

The Temple of the Cat by Thomas Canfield

The Shell-Spire by Sara M. Harvey

In Ice Entombed by K.G. McAbee

The Matter Concerning Mr. Symmes and the Hollow World by Michael Penncavage

The Road to Cathacara by James C. Simpson

A Map of Illusions by David Sklar

Adlivun (The Beneath) by Rachel Verkade

The Lady of the Lost Valley by John Walters 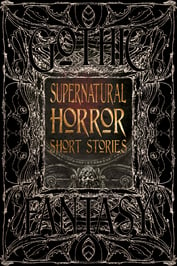 Bones of the Dead by Daniele Bonfanti

The Mourning Woman by E.E.W. Christman

The Fifth Gable by Kay Chronister

Swim At Your Own Risk by Matthew Gorman

The Murmur of Its Name by Stephen Kotowych

An Idle Dream, Quite Gone Now by G.L. McDorman

This Time, Forever by Michelle Muenzler

Tracks in the Snow by Cody Schroeder

Magdala Amygdala by Lucy A. Snyder

My Brother Tom by Mariah Southworth

The Bride by Angela Sylvaine

The Floating Girls: A Documentary by Damien Angelica Walters

The Final One Percent by Desmond Warzel