Hyrax searches for new revenue to rebuild from its defeat. Maaraw revolts, Silangan is uprising. The occupied worlds bleed money. There is but one place left: Tirgwenin, Jareth’s world, wild and unclaimed.

His colony destroyed, Morgan returns to Enskari to beg for rescue. Ethan Sommerled, savior of the planet, Morgan’s one-time patron, is embroiled in court politics and cannot help. Morgan must find other allies if he is to save his family.

But another watches Jareth’s World. On Temple the prophet knows the secret, sees the threat, and rallies the Saved to defend civilization in holy and bloody crusade. 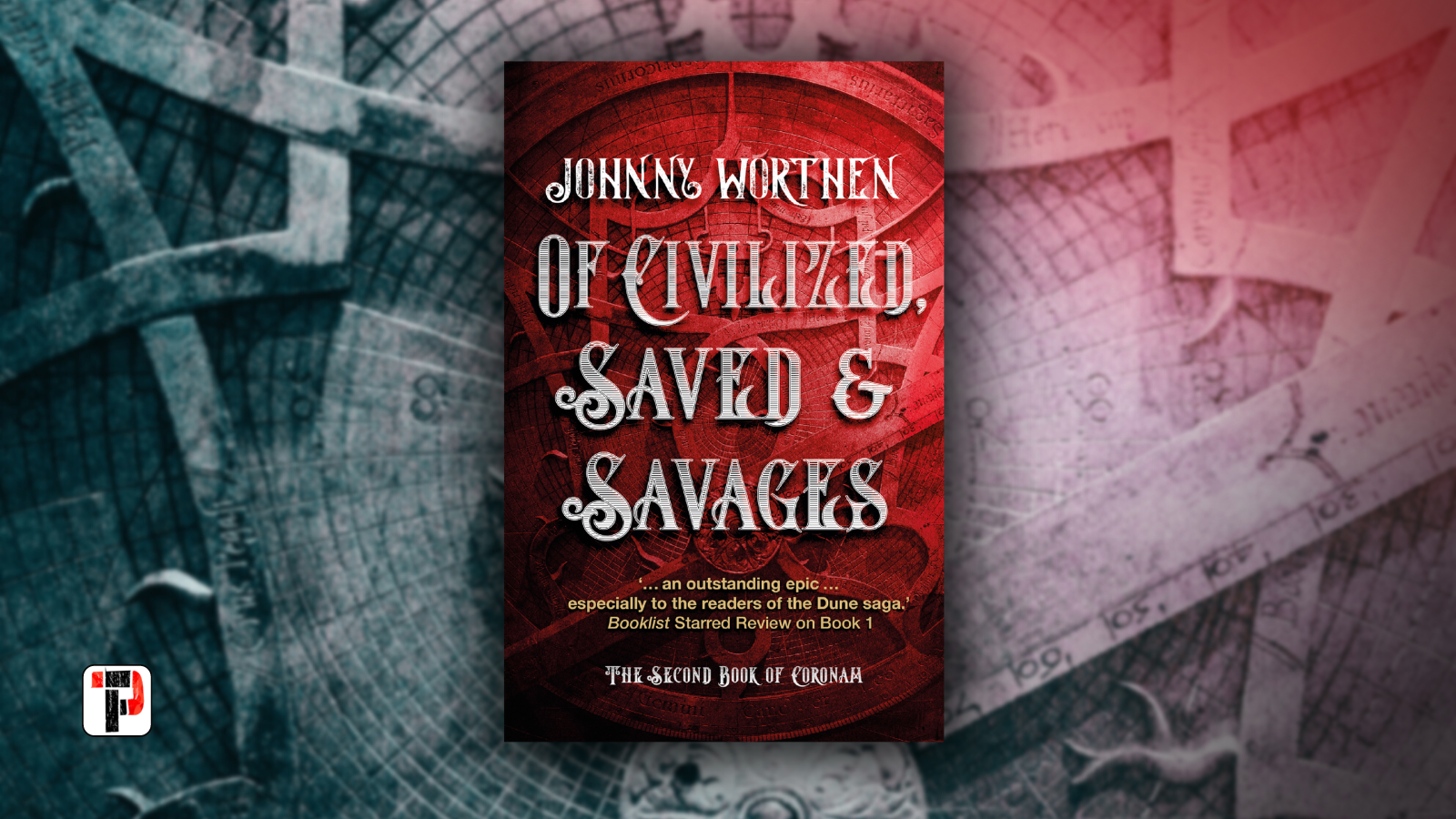 The series is called CORONAM, from the Latin meaning crown, a reference to the miraculous solar system serving as setting. I wrote it before the recent unpleasantness with a virus of similar etymology which shall remain nameless.

In OF KINGS, QUEEN AND COLONIES, Coronam Book 1, we’re introduced to a not too distant state of humanity in exile. When our planet became unlivable the rich and powerful fled in spaceship for a new one, but technology was robbed from them by the angry sun’s effects on technology. Separated for centuries each planet followed a similar social evolution based on the similar ideas and prejudices they’d brought with them.

Now, after centuries of technological rebuilding the survivors of Old Earth are again travelling the space between planets, but a war is brewing between the major ones: Enskari and Hyrax. Different developmental paths have led some worlds to revolt against the old religion and Enskari has chosen, Zabel, a woman to lead their world. This is an affront to tradition and the excuse Brandon on the Hyrax needs to conquer the entire solar system.

Meanwhile a small colony of separatists travel to the only unclaimed planet in the system, a place called Tirgwenin, or Jareth’s World, distant and savage. There they will be betrayed but what they find will effect the course of the coming war and the trajectory of the entire human species.

It is a story about queens and kings, pirate lovers, philosophy and politics, alien gifts and second chances. It explores the price of power, the human capacity for empathy and the madness of terrible cruelty. It is the story of a savoir child, a cunning spy, a zealot priest and determined revolutionaries. It is a retelling of great historical moments where another path might be chosen. It’s wonderful.

In OF CIVILIZED, SAVED AND SAVAGES, Coronam Book 2, the story continues from the reeling defeats and second chances lived in the first. Hope fights against momentum. Fear rules the civilized worlds rebellion the savage ones, and on one world, an alien mind assembles its strength for the coming showdown of evolution. Humanity is threatened at its very core and masters of state, heads of religion, enemies and pirates, must unify if they are to maintain their civilization.

Mankind is repeating mistakes made centuries before, allowing greed and cruelty to drive their evolution. Slavery and altruism are major themes, as is suffering and empathy. Corrupting power cannot be ignored when dealing with a backdrop of this scale, so it’s there in abundance. I also explore the power structures of church and gender, capitalism, and the dehumanization of The Other.

Many of the characters are based on historical figures from sixteenth century England and its interests. Queen Elizabeth, Prince Philip of Spain, the Pope in Rome, Sir Walter Raleigh and John White all have their dopplegangers in my story. Millie who plays a pivotal part in the story, a young girl, is a created figure, but in her heart I hear the echo of Joan of Arc in her strength and innocence.

The underpinnings of the political intrigue came from Lee Miller’s book Roanoke, but the themes have been brewing in me since forever. Arthur C. Clarke’s Childhood’s End played a big part here in concept, as did Ursula LeGuin from her call for speculative authors to envision a different future. Looking into the future with the knowledge of the past, seeing my own sons walking into an unsettld future, I tried to imagine a path different from what we have, identifying the moment in history, then and future, where we’d have the best chance to divert to a better existence. It was an act of therapy for me in these troubled times.

Write for yourself. Every book needs to be written, but not every book can be published. First and foremost the work should be the creative outlet of the author. That is the goal, everything else is gravy. If you can NOT write, do that. If you can’t not write, go forward and enjoy the ride. Every word, thought, deed will change the universe. You are witness; you are scribe. Make it make sense. Also, coffee contains the Muse.

Usually I write at home. If there’s a particular block facing me, I’ll change locations, go to a coffee shop or library to remove the familiar distractions and press on. Coffee shops are magical for that. An hour with an espresso is as good as three in my slippers.

I’ve tried to write with music, but unless it is something so familiar that I can ignore it, something without lyrics, it interferes. I’ll often play a song to get in the mood, but then once the fingers hit the keyboard, I’ll turn it off and write. I have a bad habit of reading what I write out loud. This is useful to me, but if I’m writing in public, I get a lot of stares.

Each project is different. With Coronam, the first draft was pretty fluid. I had the usual muddled middle where the reins are taught, but I can’t let go just yet. There it’s about incremental build up and rounding the action toward the end.

I’ve worked with some really fantastic editors and some less than fantastic ones. There are those who have a strict rubric of rules, grammatical and conceptual that are often too rigid. Those I have trouble with, The best editors are those that see what the author is trying to do and strives to bring out that vision. Those are not editors, but partners and are an absolute joy to work with—Flame Tree’s editors are those, they have head and shoulders, miles above, in orbit among, the best I’ve ever had.

I’m still editing the books of Coronam now, cutting fat, trying to fit it into its prom dress. Otherwise, I have a comedy mystery series which is just fun and keeps me working. I try to release one of those a year. I wrote a horror during the pandemic, more therapy than literature, but it might see paper. I have to get the courage to read it again to decide. New projects are always popping up. New science fiction scenarios are also on the horizon. 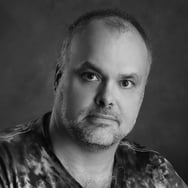 Johnny Worthen is an award-winning, multi-genre, tie-dye-wearing author, voyager, and damn fine human being! Trained in literary criticism and cultural studies he earned his Bachelors and Masters degrees from the University of Utah. Beyond English on a good day, he speaks Danish and reads Latin. He is a Utah Writer of the Year.

An avowed Deconstructionist, Johnny writes up-market stories from the inside out, beginning with theme and pursuing an idea through whatever genre will best serve it. So far he has published fiction novels as mystery, young adult, comedy, urban fantasy, horror and science fiction, both traditionally and indie.

A frequent presenter and panelist at writing conferences and fan conventions, he is active in local communities of artists and writers. A long-time volunteer for the League of Utah Writers, the state’s oldest and largest writing organization, he has served several high positions of leadership including President from 2018-2020.

When not writing his own stuff, Johnny edits professionally for a small dark fiction press in Los Angeles and teaches Creative Writing at the University of Utah as an Associate Instructor. He lives in Sandy Utah with his wife, sons and cats. There’s also a lawn. You can visit his website here.

The book is available to buy now here.
If you haven’t read the first book in the series, you can get a copy here.