Of Makings, Maps and Monochrome by Johnny Worthen

Today I offer a story of maps and novels. My new book, OF KINGS, QUEENS AND COLONIES is upon us and I thought it might be interesting to share with everyone the strange path of the map in it. Yes, I wrote a book that benefited from having a map. Robert Louis Stevenson would be proud.

Let me introduce you to the first map. The most important one. This one I built using Scapple, a great little program from Literature and Latte, the folks that brought us Scrivener, for all you non-writer types. Highly recommended resource for creatives everywhere.

This is the overview of the Coronam solar system. I went on to make close-up maps of all the planets, which included associated characters, traits, and other details, I needed to keep in mind when visiting those places, but this one was central. The most important thing it did was arrange the planets in their strange orbits. All the worlds around the volitive star called Coronam, share a single orbital path in the Goldilocks zone. This is strange and mysterious feature, a central conceit, and a mystery at the heart of the miracle that gave humanity its second chance. 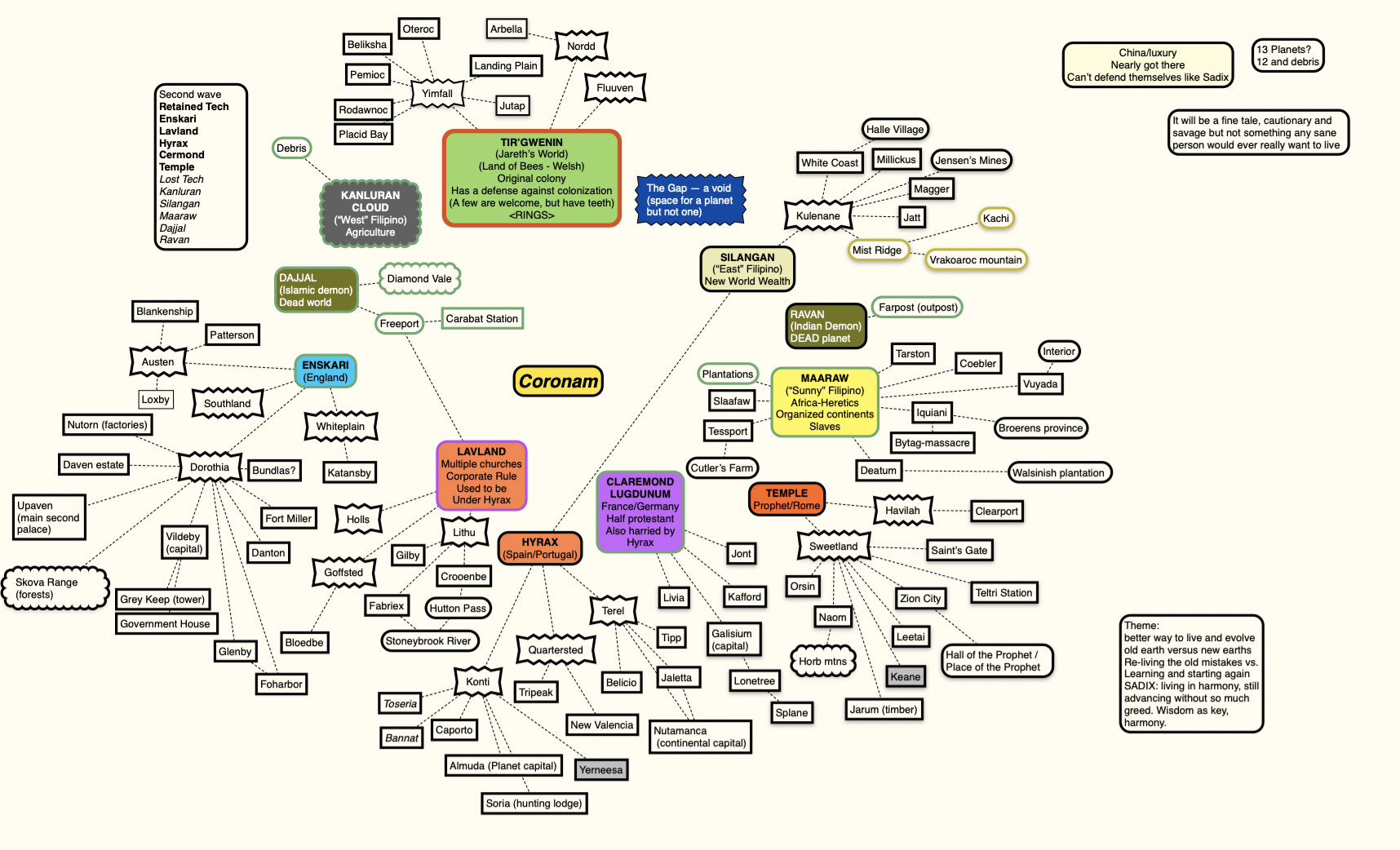 You can see it’s a very complex diagram. It evolved as I needed it to. Here with the planets are listed the continents, settlements and cities, the geographic places referenced in the writing, born as necessary and insight. You’ll see the original ideas here, the place Sadix exists no longer, become Tirgwenin, and the original note of that place is here but a remnant. Here also are my cheat codes, the crib noted parallels between my science fiction places and their origins in the 16th Century. History doesn’t repeat itself, but it does rhyme.

You can see this map served me for not just the first book in the trilogy but throughout. Careful readers will see clues to future events or at least places where they’ll happen.

Behold the inner workings of an author's mind.

This map however, was strictly internal (and I cringe sharing it today). I’d have gladly left it in among my notes, and not burdened readers with a front-piece graphic, but the system was just complicated enough that a visual reference was needed. Nothing like I’d created in my construction, but something reader-friendly and thematic.

Enter my lovely artist wife Michelle who dashed out a quick diagram to use as a front piece of the drafted manuscript.

Here offered for your perusal is her first sketch. 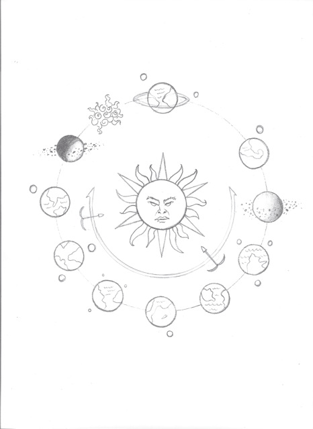 And the one that served at the front of the manuscripts until publishing time. 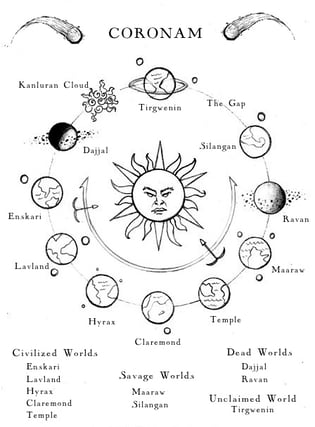 This one became the archetype for all the maps that followed. Note the antique feeling of it, the monsters in the corners (comets), the surly sun in the middle. It was meant to evoke ancient maps and sea-faring charts. The bottom arcs are shipping lanes, the odd shapes upon them, the characteristic seeds ships necessary for travel. The convenient listing of planets and their level of “civilization” is also a handy cheat-sheet for readers and contains foreshadowing and thematic presence.

This was the map that accompanied my manuscript to my editor at Flame Tree Press. I explained early on that this was a placeholder, that another map would need to be made. I was assured that wouldn’t be a problem Flame Tree Press had a stable of graphic artists and talented people on their end.

There was a long delay in the acquisition of the title and its release. This is standard at this level of publishing. I waited anxiously for the map proofs. But they never came. I wondered and worried and pondered, and poked.

Then came the edits. And then the text proofs. No map yet. All good; working on it. Then came the galleys, the rough draft of the printed book and there was the map. The exact same one my wife had, but in monochrome. 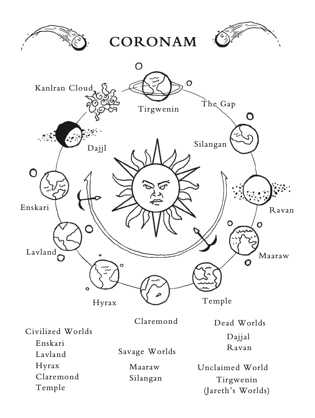 You can see that it’s the same one but the grayscale has been removed. This book, to my delight was being printed on printers, not copied by computer. Old school. Thus we were in black and white world.

The design however, though I loved it (still do, Michelle), wasn’t ready for primetime. Panic.

Enter an idea I’d had since the beginning of the project. I am friends with a very talented artist named Sean Ricks who specializes in fast production and maps. Yes, maps. I told my publisher to give a week to get something myself and commissioned Sean to make it happen.

Sensing my anxiety, within hours we had this: And then within days, he had painted this canvas immortalizing the Coronam system. See how wonderfully the system pops in paint. The planets are mildly coded in the book with the sun’s influences marking the inhabitants with slight changes in their coloring. Note also the sepia tones to evoke the ancient quality of parchment. The monsters are still there—the comets. The sun humanly represented.

With the addition of some computer support, we get a satisfying and complete color map of the system. 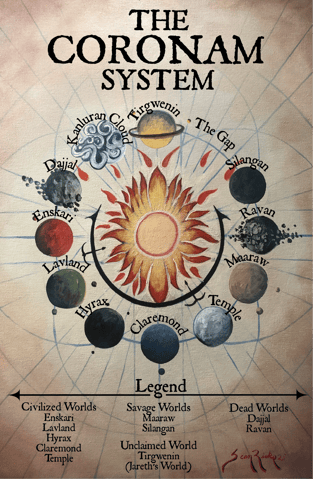 Thoroughly in love, I set promptly sent the graphic off to London, happy and contented only to receive a quick rejection. Do you see it? Do you remember? We didn’t. Yeah. Black and white only. To prove we didn’t understand the issue, we sent a grayscale version, and to their credit the kind English people patiently explained what black and white meant. 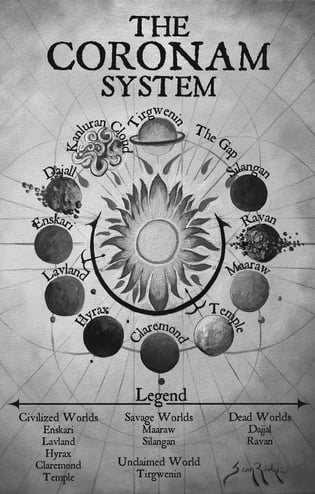 With days to solve this problem, I found the panic button again, the worry switch, the deer in the headlight stare and reached out to Sean. Calm as only someone who didn’t have their literary career on the line, he told me to chill. He wouldn’t be deterred. We had this. Within a dazzling short time, a day or two at most, with his illustrator/artist skills. he produced this bad boy. 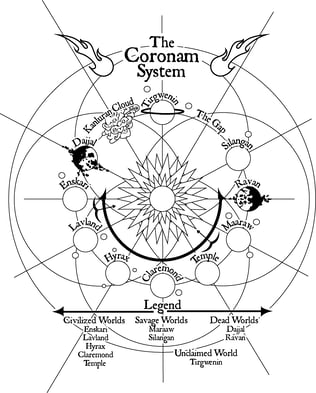 Having time to consider it, I myself stepped up and tweaked the star’s rays for dramatic effect, used the black in black and white to emphasize the world, and got to this one: 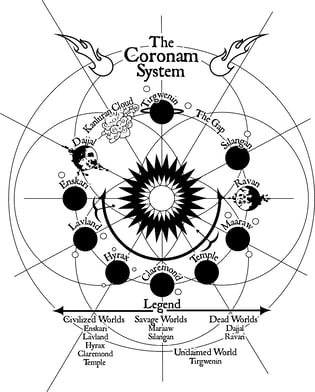 Retained is the stylization, like the Kanluran Cloud and the comets, but also a technical dimension suggested by the very precise lines and angles. The circles could imply gravity wells or safe shipping routes. Ripples in space reflected in the picture.

I sent it the island and it was accepted.

That would have been the end of it except the artists at Flame Tree discovered a mild but effective improvement. Note this, the final version with the “aged” lines. Perfect. 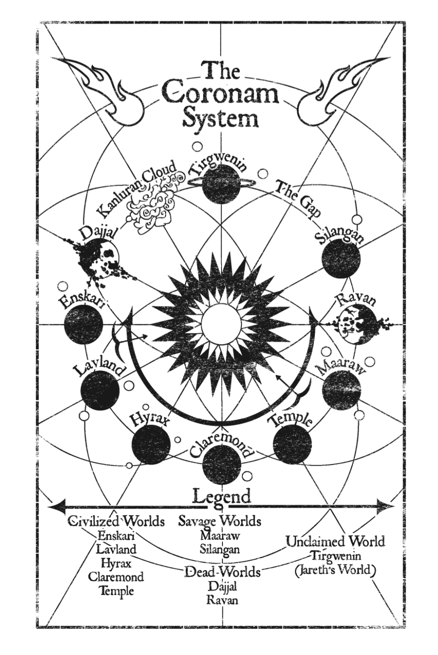 And there you have it. From writing aid, to published frontispiece. It was an exciting process and I’m very pleased with the final result. Plus, I have an awesome color version for marketing. New allies in the art world and a firm understanding of what monochrome means. I’m going to have posters made of it. Frame one next to the original portrait. Sell them at Comic Con. I’ll sign them.

Thanks to everyone involved in this process. Writing may be a solitary pursuit, but publishing sure as hell isn’t.

See you at Coronam.

Of Kings, Queens and Colonies: (Coronam Book 1) is a multi-protagonist story set in the human future where the politics and players of sixteenth-century Europe echo the repeated mistakes of humanity at another crucial crossroads of decision and evolution, and it is out today in Hardback, Paperback and eBook - buy it here!

Nearly a millennium after The Unsettling of old Earth, the new civilized worlds are on the brink of war. The planet Enskari, as an affront to tradition and the Prophet on Temple, has placed Zabel, a woman upon its throne. With the backing of the church, Brandon of Hyrax readies an armada to subdue Enskari and unite the system under a single rule—his own.

Meanwhile an Enskaran group of separatists depart for the last unclaimed world of the system, Tirgwenin. There they will find something strange. Something low and connective, subtle and spreading. Something alien. Something truly threatening.