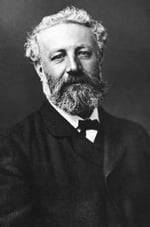 A Taste for Adventure

By way of a brief biography, Jules Verne was born in 1828 in the maritime port city of Nantes, France – a location which no doubt influenced his awareness of ships and world travel, as well as encouraged his enthusiasm and curiosity for sea voyages. Verne initially followed the path of a law career, following in his father’s footsteps and studying for a law degree in Paris. Upon qualifying, however, the life of a writer had already begun to beckon and he was attracted to the theatre and playwriting. He married the widow Honorine de Viane Morel in 1857, with whom he had one child. During this period Verne travelled extensively throughout France, Britain and America, and he allegedly also bought a ship so that he and his family were able to travel more freely and more frequently.

The year 1862 marked the beginning of a long and fruitful relationship with editor and publisher Pierre-Jules Hetzel, whose magazine enabled Verne’s serialized stories to be seen and appreciated by the public at large. Hetzel also published the works of Émile Zola, Victor Hugo, Charles Baudelaire and Honoré de Balzac, though he is now most remembered for his publication of Verne’s Voyages Extraordinaires, first by chapters in his magazine and then in full book form. The 1860s and 1870s were hugely successful for Verne to the extent that he was able to live completely off his writing, and it was during this era that he produced some of his most memorable and influential works, the impact of which can still be seen in science fiction and adventure tales that emerge today. As Ray Bradbury once commented: ‘We are all, in one way or another, the children of Jules Verne.’

Verne’s novels have been appealing to people’s sense of adventure ever since they were first published, with his techniques often emulated in later science fiction. Perilous journeys, discoveries, intrigue, battles, investigation, danger, natural and technological wonders, intrepid characters with an undying thirst for exploration… Here is a quick tour of his most visionary tales, and the imaginative worlds they explored:

This subterranean adventure introduces the eccentric character of Professor Lidenbrock, who undertakes, along with his nephew and a guide, a descent into the earth’s depths through a volcanic crater. The determined professor leads the expedition after his reluctant nephew successfully cracks a mysterious code left by an Icelandic alchemist. This nephew, as narrator, is much less keen on the venture than his uncle, and acts as a witness to both the professor’s adventurous nature and the strangeness of their surroundings deep below the earth’s surface. There they experience a world rich in life and danger previously undiscovered, including such phenomena as huge mushrooms, prehistoric animals (including a human), giant insects, a ‘whispering gallery’, an underground forest and a vast sea, complete with its own terrifying whirlpool.

Originally published a thousand years before the day it describes, this short story follows the activities of Francis Bennett, director of the Earth Herald, a ‘spoken’ news service that has developed from traditional newspaper journalism. Over the course of the day, we see him interact with various futuristic devices including ‘Phonotelephotic’ apparatus (that seems not a million miles away from FaceTime), aero-cars, automated systems and vast networks of tubes that deliver a number of services (including a Transatlantic Submarine Tube). The tale presents an excitingly busy and creatively productive world where such technological inventions are very normal for the director, who instead deals with the inventions of tomorrow. The scientific advancements that are ‘pitched’ to him as news ideas are intriguing and light-heartedly described, and predict such feats as human hibernation and the transportation of an entire city.

Set amongst the context of other (and more recent) science fiction authors and stories, have a read of this short story and marvel at Verne’s predictions for the twenty-ninth century in our new anthology: Science Fiction Short Stories.

Twenty Thousand Leagues Under the Sea (1870)

Credited with more accurate scientific theories than had been present in Journey to the Centre of the Earth, this underwater adventure novel set a precedent and captured the imagination of many. The character of Captain Nemo has gone down in popular culture as an iconic outlaw wandering the seas on a quest for knowledge and revenge on the civilization that exiled him. Closely linked with his ship, this mysterious antihero figure also serves as an emblem for the freedom yet isolation of rootlessness.

The tale begins with an expedition from the US to destroy a mysterious sea monster, which turns out to be Captain Nemo’s whale-shaped ship Nautilus. In order to preserve the secrecy of the vessel and its occupants, the expedition’s protagonists must remain on the ship, itself a very advanced form of submarine, especially for the period of Verne’s writing. The narrator, a French marine biologist, explains the sights and experiences of a host of incredible sea creatures and marvels discovered while travelling and diving in this watery environment. This choice of location provides thrilling adventure, awe, intrigue and danger to the narrator’s exploration, and the sea, described as the ‘living infinite’ in the novel, is praised throughout for its power, mystery and wonder.

Learn more about Twenty Thousand Leagues under the Sea here.

One of Verne’s final novels, The Master of the World is more politically charged than his earlier tales, linked to the slight bitterness of Verne’s later years after suffering the deaths of his mother and publisher. The novel features the mysterious inventor-villain Robur, who has created a huge vehicle called ‘The Terror’, which can travel underwater, overwater, in the air and on land, at exceedingly fast speeds that render it invisible and incredibly destructive. The detective narrator must investigate a number of mysterious incidents before he discovers Robur as the culprit, who was played by Vincent Price (who else!) in the 1961 film.

Want to read this book? Buy a copy of Master of the World here.