At its heart, The Devil’s Equinox is about what happens when you get your wish... but every wish has an unexpected price. Austin is trapped in a troubled marriage and wishes offhandedly in a bar one night that his wife was dead. When that wish comes to pass and he finds himself quickly in a relationship with his new sexy next-door neighbor who helps him care for his baby girl, it seems like his life is finally looking up. She introduces him to Equinox, a secret club filled with dark music and erotic rituals. Austin is suddenly living a wild life that he could never have imagined. But when his baby girl is taken by the denizens of Equinox to serve as the center of a horrible ritual, he realizes just how dark the price of his wish might be. And he has to fight to save both of their lives!

I don’t ever intentionally set out to write about “themes,” but I suppose they always end up surfacing, due to the problems my lead characters are forced to face and overcome. In this case, the challenges of fatherhood, the difficulties of love and the dangers that can hide in the lures of lust all come to play.

You’ve written ten other novels; what inspires you and what makes this one different than the rest?

I’ve always been fascinated by ghosts and witches and possession and demons – the incursion into our world of some after- or other-life that is patently supernatural.  I’ve never been much interested in serial killer horror, because you can read about crazy people picking up knives and guns and killing innocent people in horrible, unfathomable ways every day in the newspaper. That’s not entertainment or escapism to me. I find the idea of an invisible world, even if it is sinister, a fascinating diversion from the horrors of real life. While I have written about killers, they’re never just killers – like my villain Ariana in Sacrifice – she was performing her sacrifices as an occult ritual to open our world to demons.

So most of my novels have dealt with demonic, supernatural themes – albeit, with lots of bloody sacrifices and rituals. With The Devil’s Equinox I got to play with both dark erotic and evil occult themes, mixed with the core fear of fatherhood – how do you save your children from the evil of the world?  The enticement of the power of dark magic and the pleasure of forbidden sex are heady lures. And I had fun playing with some of the symbols of Catholic religion. As someone who grew up in a very conservative Catholic home, I find turning established symbols on their heads has a strong charge.  It’s provocative and for those with that background, hopefully thought-provoking about the things they accept and believe.

Typically, with a couple exceptions, I have not based characters in my novels on specific people, but rather I will combine certain traits or “types” of people that may intrigue me. And, I suppose, my characters, both good and bad, always include some sliver of me in them.  I’ve had people question character actions in some of my stories and critique them saying, “people wouldn’t ever do that,” to which I shrug and usually find myself answering, “well... I might if faced with that situation… that’s why I wrote it!”

Summer!  Despite growing up and living most of my life near “The Windy City” I abhor the cold. The Chicago area has cold and blustery weather from October through April, and by the time things finally start warming up in May, I’m near the end of my rope. I have never skied because a) I’m not very athletic and b) I can’t stand the snow and cold. If it’s below 60 degrees, I don’t want to go outside. If it’s above 80… I’m happy. I love sitting at my glass bar table on the patio all afternoon on a Saturday or Sunday in summer when it’s 85-95 degrees writing. I plug in the iPod and turn up the music, power up the laptop, pour a cold beer and work outside for hours, enjoying the heat. My wife says I’m crazy and stays inside with the air conditioning.

I think the best advice is that if you want to be a writer… establish goals and deadlines for yourself. There are millions of people who will tell you “I got a book in me I really want to write” who will never discipline themselves to actually do the work to make that happen. They will talk the rest of their lives about how they want to write a book once they get the time. Got news for you:  you never “get” the time. You make the time. Or you don’t.

The other advice is also pretty simple. Write the kinds of stories you like to read. Don’t try to chase the next fad to get rich quick by writing. You’d be better off watching TV and playing the lottery. But if you write books that you want to read, you will always entertain yourself and find joy and fulfillment in what you produce, regardless of whether it becomes a bestseller or not.

Where did you write The Devil’s Equinox?

My longtime readers know that I write in a lot of different places because I usually put in a note about how the book evolved in my acknowledgments. In addition to writing, I also keep a regular dayjob, and I travel a lot during the year for that. So, when I’m on the road, I always scout out an Irish pub or brewery with good beer and good music and hole up in at night for a few hours to work on the novel at hand on my laptop. Over the years, I’ve written a lot in Seattle, San Francisco, Santa Fe and San Diego and halfway around the world from home in Munich, Amsterdam, Barcelona and Tokyo.  But I’m not always writing “out of town”! When I’m in the thick of a book, I also will schedule a “writing night” where I don’t go home immediately after work but instead go straight to a local pub to write without the distractions of home. My family is used to me writing and they leave me alone to work when I need to, but it’s sometimes just easier to focus in a different place. And a place where someone automatically brings you beer!

In the case of this book, The Devil’s Equinox was written more at the oak bar in my basement and on my patio than around the world, but chapters were written at my local Irish pub, Quigley’s, as well as in part at Tir Na Nog Irish Pub and the Beer Authority in New York City (I was there a couple times this year), at Beer Park and Sin City Brewing in Las Vegas, at the Jolly Pumpkin Brewery in Ann Arbor, MI and while on vacation in Myrtle Beach, South Carolina.

I always write to music. I really don’t like to do anything in life without music! For writing, I listen to a lot of dreamy pop CDs with dark or exotic overtones. I keep a stack of Cocteau Twins and Delerium CDs near the stereo and play them to death while working on a project, and also plug in Conjure One, The Cure, New Order, OMD, This Mortal Coil and other things. I’m a big fan of StrangewaysRadio mixes on Mixcloud.com too. Now and then, during an action scene, I might plug in some more upbeat or angry music, from Marilyn Manson or Rob Zombie to The Blasters. Or I might put on an intense dark dance music mix with artists like Covenant, Brainclaw, Knife Party, Seraphim Schock, Wumpscut, Ministry and more thanks to my friend DJ L.D. in Orlando.

Life seems to always move faster and faster! So, I don’t find the process hard – what’s hard is to make the time to write or edit. I have been a newspaper reporter and magazine editor, so I’m used to both writing and editing on a daily basis – but both exercises take a lot of dedicated focused time. Carving that out consistently is the hardest part of writing when you also have another full-time job and a family. But there’s very little that is more fulfilling than a solid afternoon of writing when the words flowed well and you’ve come with some plot twists that you hadn’t thought of before you sat down.  The magic of writing is creating something from nothing… and not being able to explain how or why the story came.

With the right editor, like Don D’Auria who I have worked with on many of my novels, it’s a pleasure. It’s not about the quantity of the edits ultimately, but the quality. One of my best edits was by a romance line editor who literally marked up every page of my novel The Pumpkin Man. As a creator, you might find that level of critique disheartening… but his comments and suggestions were spot-on and improved the book. I’ve also had copyeditors for a horror line miss obvious corrections and make suggestions to change things that are counter or irrelevant to the book’s direction. One copyeditor once suggested that I remove a Rocky Horror Picture Show reference because readers might not get it. I would be both shocked and very disappointed if I found that most horror readers aren’t familiar with the “Time Warp.” The reference stayed in the book. In the end, every writer needs an editor. But you need a good editor. Thankfully, I’ve gotten to work with Don for most of my career!

Thank you to John for taking the time to speak to us about his writing practices, his inspirations and telling us a little about The Devil's Equinox. You can pick up this new FLAME TREE PRESS edition of his book, along with the other June releases now. It will be available in paperback, hardback and ebook. Check out our website for details. 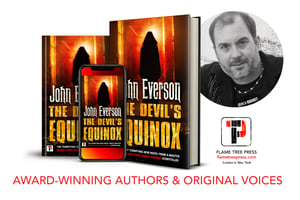 Over the past 25 years, his short fiction has appeared in more than 75 magazines and anthologies and received a number of critical accolades, including frequent Honorable Mentions in the Year’s Best Fantasy & Horror anthology series. His story “Letting Go” was a Bram Stoker Award finalist in 2007 and “The Pumpkin Man” was included in the anthology All American Horror: The Best of the First Decade of the 21st Century. In addition to his own twisted worlds, he has also written stories in shared universes, including The Vampire Diaries and Jonathan Maberry’s V-Wars series, as well as for Kolchak: The Night Stalker and The Green Hornet.
His awards are; Covenant - HWA Bram Stoker Award for First Novel, 2005, Letting Go - Bram Stoker Award Finalist, Short Fiction, 2007 and NightWhere - Bram Stoker Award Finalist, Novel, 2013.
Make sure you check back in with the blog all week for more Q&As with the authors of our June releases!