It's release day for our May titles! We are very excited to share this great Q&A with the amazing writing team of Steven Hopstaken and Melissa Prusi. They talked to us about their new book, Stoker's Wilde, researching historical figures and their inspirations! Make sure you check in throughout this week for new Q&As with the other authors of our May titles.

It’s a story set in Victorian England where Bram Stoker, the author of Dracula, teams up with Oscar Wilde to stop a vampire cult led by a mysterious madman known as the Black Bishop.

The novel explores the corruption of unrealistic Victorian morals as it entered the modern age, and the personal price one pays for coming into contact with evil.

Bram Stoker and Oscar Wilde did know each other in real life. They were both originally from Dublin, and Oscar’s brother went to school with Bram. Bram actually wooed away Oscar’s fiancée and eloped with her to London. The two men were forced to move in the same circles when Wilde became a playwright and Stoker became the manager of the most famous theatre in London.

The original novel of Dracula was our biggest influence. As an homage, we wrote it in the same style: Like Dracula, Stoker’s Wilde is an epistolary novel told in journal entries, letters and news clippings. We also drew heavily on Oscar Wilde’s The Picture of Dorian Gray, which has similar themes.

Create a detailed outline, so you don’t get lost. If dealing with historical characters, do your research first. You’ll be surprised at what you uncover and how it can help propel your story.

Mostly in our home office. We try to treat it like a job, and get the most done when we’re in a place where we can shut out the rest of the world for a while. But, if we’re finding it too easy to get distracted by housework or cats, we’ll take our laptops and go to a coffee shop for a change of scenery.

Steve tends to tune everything out. He’s used to writing advertising copy and news stories in noisy offices. Melissa likes to put her earbuds in and listen to music; it helps her tune out other distractions and focus on the writing.

Editing your own work is harder than writing. It helps to take a break between the writing and editing phases, to get some perspective on the story. But once we started editing, the hardest part was stopping – sooner or later, you have to submit the manuscript!

We are plotting out the sequel, Stoker’s Wilde West, where Bram Stoker and Oscar Wilde come to America to help Teddy Roosevelt put down a vampire uprising.

And, we’re working on a young adult novel where a girl gets a cell phone installed in her brain.

Steven Hopstaken was born in Grand Rapids, Michigan, where he spent his formative years watching and reading science fiction and horror. He has a degree in journalism from Northern Michigan University and spends his free time traveling; writing screenplays, short stories and novels; and practicing photography. 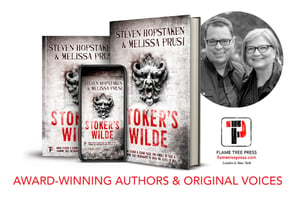 Melissa Prusi was born and raised in the Upper Peninsula of Michigan (often mistaken for Canada), and studied video and film production at Northern Michigan University and the University of Michigan. She's been a video editor, a semi-professional film reviewer, a three-time champion on the quiz show Jeopardy!, and a Guinness world record holder (1990 edition, for directing the longest live television show).
They met in a college screenwriting class and married three years later. They spent a brief time in Los Angeles, where they both worked for Warner Bros. television. They eventually ended up in Minneapolis, Minnesota, where they love the arts scene but dread the winters. While they both currently make a living as website content managers, they have sold two screenplays, which have been lost to development hell. They've indulged their fascination with Bram Stoker and Oscar Wilde through trips to Dublin and London to research their lives and visit sites mentioned in Stoker's Wilde.
They live in St. Louis Park, Minnesota with their two cats. If they're not writing, you can usually find them at a movie, local theater production, improv show or pub quiz. This is their first novel!
Make sure you check back in with the blog all week for more Q&As with the authors of our May releases!