Continuing in our launch week Q&As for our April releases, we talked to P.D. Cacek! She told us about her new book, Second Lives, her advice for new writers and the art of being edited!

Besides what might appear to be the obvious overtones—reincarnation and the strength of the human spirit—I feel SECOND LIVES is about hope, hope in our own strengths as humans and in our ability to accept the unimaginable. It is also a story of acceptance and love and how much we’re willing and able to give up so that others might be given a chance.

Do you like the slow start or “hook ‘em fast” opening?

That depends on the plot of the book. If I’m writing about monsters, as I did with the werewolves in CANYONS or the ill-prepared vampire in NIGHT PRAYERS and its sequel NIGHT PLAYERS, then I set the hook quickly so the reader will know exactly what they’re dealing with and what to expect. But for SECOND LIVES it was important that the reader got to know the characters and their lives, so a slower build up was necessary. In this way, I hope, the reader becomes part of the story so that they feel for the characters when their lives are changed forever. I personally like the slow build, but, again, it all depends on the story.

It’s funny, but generally when I write, I have an image of the main character(s) in my mind...and they’re usually actors or actresses whose work I admire. But that didn’t happen with SECOND LIVES. I had the story and the characters and knew exactly what they looked and sounded like...but they were strangers. I’d never met these people that I could remember, but there they were. Some of the characters, like Crissy and Dr. Ellison, may have characteristics that might be recognizable, but for the most part all the characters are composites.

The first, and only because I began reading him when I was still a child, was Ray Bradbury. His style was natural and his stories, even those that took place in the future or on other planets with alien characters, had a strong element of reality to them. He told stories that touched people because they had universal themes. I’ve also learned a great deal about the craft and art of writing from reading the novels of Peter Straub and Thomas Tessier. Like Bradbury, their novels are based in the “every day” where anything, sometimes horrible things, can happen. Whenever a story or novel is giving me a hard time, I start reading one, or all, of these authors. I don’t know if it’s the simple act of removing my forehead from where it’s been banging against the keyboard or their wonderful storytelling, but it has never failed to inspire me...or get me back to writing.

Besides making notes on ABOMINATION, a much darker novel base in the SECOND LIVES world that deals with one man’s fears and hatred of these “travelling souls,” I’m working on a short novel about a woman photographer and her obsession with a child-sized manikin named SEBASTIAN.

Well, I’m sure that we all can’t wait to read those too! Thank You! 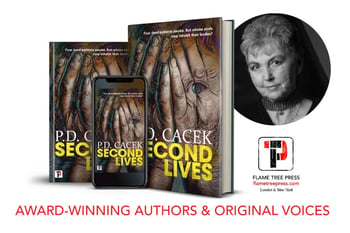 P.D. Cacek has published over a hundred short stories and five published novels. A past Guest Lecturer at the Odyssey Writing Camp, Cacek's horror, fantasy and science fiction stories have appeared in numerous magazines and anthologies since going professional in the late 90's. She is also proud of the book she recently co-edited, with Laura J. Hickman, the charity anthology, Now I Lay Me Down to Sleep, with all proceeds going to The Jimmy Fund of the DANA-BARBER Cancer Institute.
Cacek holds a Bachelor's Degree in English/Creative Writing Option from the University of California at Long Beach and is a certified Wilderness Survival Instructor. A native Westerner, Cacek divides her time between Arvada, CO - which looks own on the Mile High city - and Phoenixville, PA - only a short walk from the Colonial Theater where the famous "Run Screaming From Theatre" scene in THE BLOB was filmed. When not writing, she can often been found with THE PATIENT CREATURES, a group of costumed storytellers.