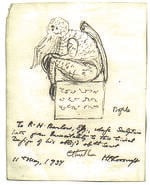 Our amazing illustrated title Cthulhu is now available as an iBook. As iPads and iPhones are amazing devices to view images on, in today's blog we're going to look at a handful of great images from the book.

Many artists really enjoy exploring the surreal creatures and places that inhabit Lovecraft’s universe, even if though it can be a challenge to translate the writer's words into a visual image.

As influential fantasy artist Roy G. Krenkle said, ‘the most interesting characters in Lovecraft’s stories are invisible and smell bad’. Now, that is a challenge. However, that challenge could, of course, also be viewed by an artist as an opportunity to explore the darker recesses of his or her imagination, to dispense with everyday reality and let the imagery run wild. Many have done just that.

The artists whose work is represented our book are among the best interpreters of the Cthulhu Mythos universe. Rafal Badal, for instance, captures the full horror of an awakened Cthulhu, his image of the immense monster amid broiling, red clouds dwarfing an ocean liner on what is undoubtedly its last doomed voyage. 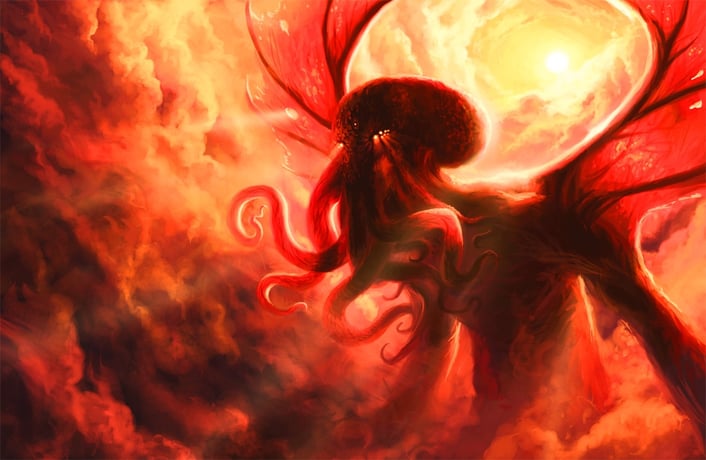 The sheer size of the Great Cthulhu is displayed brilliantly in Cloud Quinot’s image of a statue of Cthulhu (left). A tiny figure of a man stands in dumbstruck awe in front of it, emphasizing the Lovecraftian notion of humankind’s sheer irrelevance in the face of such immensity.

It aso alludes to the rich lore of Cthulhu. Through various artworks and suggestions made by Lovecraft and his associatate August Derleth, there is a wider picture being built around the elusive sea terror. Images such as Quinot's imply ancient worship of a God that may have preceded mankind as we know it. Elsewhere, you may find Cthulhu transplanted into contemporary scenarios. Whichever way you have it, one unshakeable trope is his collossal size. 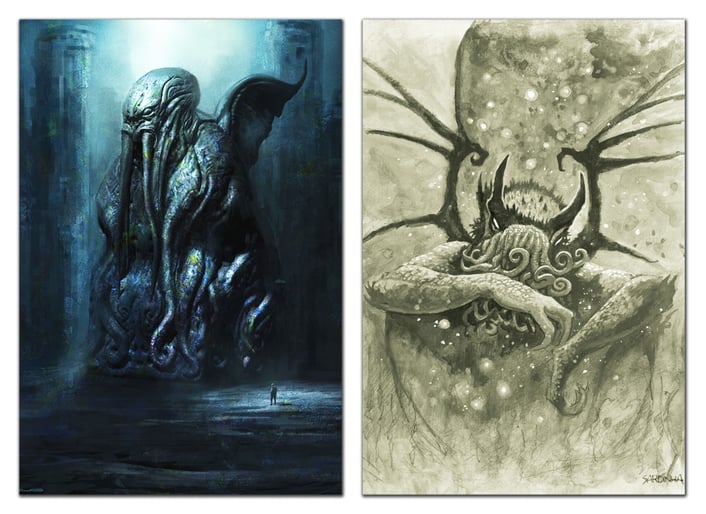 Atmosphere is another key element in communicating the horror of Cthulhu. Rick Sardinha's sketch (right), has the brutal lines and shading that create an imposing impression of the ocean-dwelling monster. This image is actually an early version of an image which would later be used by the company Wizards of the Coast.

The Cthulhu Mythos is tailor-made for comics, mixing fantastic stories with vibrant SF art. There are not only adaptations of Lovecraft stories such as the three-part Cthulhu: The Whisperer in the Darkness, but also new stories dealing with the Cthulhu Mythos.

The great English comic-book writer, Alan Moore, used Lovecraftian elements in The Courtyard and Yuggoth Cultures and Other Growths, as well as in Black Dossier, a graphic novel in the League of Extraordinary Gentlemen series. The story ‘What Ho, Gods of the Abyss?’ somewhat incongruously brings together the Cthulhu Mythos and P.G. Wodehouse’s Bertie Wooster.

In our incredible iBook we have tonnes more images that cover a range of varying art styles and interpretations of the Cthulhu Mythos. Download your copy of the iBook here.