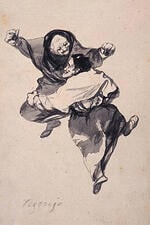 The Courtauld Gallery are now exhibiting a handful of Francisco Goya's sketches called 'The Witches and Women Album'. The prints and drawings were not intended for public display, but this collection still has plenty to offer for those who are most fascinated by Goya's dark imagination. In his drawings we see many of the gothic thoughts that made their way into his publicly displayed work. His free, almost calligraphic style communicates the motions of his subjects, who are often seen twisting in awkward, sometimes inhuman positions.

It is sometimes only this subtlety that we see in Goya's sketches that separate his images from reality. Though, conversely, his dark imagination could famously whip fantastic images into existence, such as the iconic 'The Sleep of Reason Produces Monsters' full of swirling owls and bats.

Here at Flame Tree we love gothic art and storytelling. Not only do we have an excellent range of affordable gothic fiction, but we also champion fantastic artists who create stunning gothic horror images. We also appreciate that images are displayed in a variety of forms nowadays, and though our print titles are of the highest quality we have also recently converted several of our most popular Gothic Dreams titles into stunning eBooks for the iTunes store.

The dystopian worlds created in art, books, and movies, have always been hugely popular, stemming from such fantastic literature as 1984 and Day of the Triffids, but their popularity is, if possible, increasing. Our exciting new book explores why we are so captivated by gritty, violent worlds and looks at how recent releases such as The Hunger Games have created an incredible snowball effect, encouraging new works and reminding us of the classics.

This title is packed with stunning artwork by a range of great artists alongside punchy text, bringing to life dystopian worlds full of cyberpunk fashion where the cameras are always watching...

The Necronomicon is H.P. Lovecraft's mysterious grimoire, mentioned in some of his stories with sometimes no more than a fleeting, cryptic reference. Over the years the Necronomicon has inspired other authors, such as August Derleth, to incorporate the arcane textbook into their own works.

In this exciting new book, we have informative text describing how fantasy art, literature and movies have been influenced by this dangerous tome, accompanied by powerfully atmospheric artworks.

Imagine a world where steam is the main source of power, but the attitudes are distinctly futuristic – the romance of the past meets the technology of the future.

Steampunk is an exciting mix of adventure and sci fi in a world full of cogs and rivets, goggles and corsets. Influenced by the worlds created by H.G. Wells, and Jules Verne, Steampunk has grown into a movement encompassing fashion, art, movies, literature and even music. Films such as The League of Extraordinary Gentlemen catapulted steampunk to the big screen, whilst events have sprung up all over the world in which fans create magnificent costumes and put steampunk twists on modern devices. As you read this exciting new book, enjoy a stunning selection of artworks portraying the ecstatic fantasy of steam-powered worlds.

One of the most enduring horror genres of all time, zombies continue to morbidly fascinate us. Whether it's in books, film, literature, or even graphic novels, we constantly look to these undead creatures to provide us with shocks and scares. Major film releases such as World War Z and television series such as 'The Walking Dead' are evidence of the public's insatiable hunger to watch, from the comfort of their sofas, these lurching, shuffling, horrifying flesh eaters.

Our exciting new book takes the reader through the rise of the zombie, from its vampire-like beginnings in early literature, through the birth of Romero's walking dead in Night of the Living Dead to its comical portrayal in 'zomcoms' (think Shaun of the Dead). As you read, enjoy an eye-grabbing selection of artworks portraying the modern zombie in all its post-apocalyptic doom and dread.

Beneath the waves stirs a malevolent, giant kraken-like monster - the terrifying creation of master of horror H.P. Lovecraft. First brought to life as part of his short story 'The Call of Cthulhu', published in the magazine Weird Tales, and later featuring in several of Lovecraft's works, Cthulhu is an iconic figure that has inspired imagination and terrified generations. It's name has come to define the whole mythos built up around Lovecraft's strange worlds and pantheon of monsters that inspire many writers to this day. In this exciting book, punchy text describes how fantasy art, literature, movies and even games have been influenced by the terrifying Cthulhu, accompanied by incredible artworks.