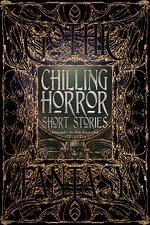 Today we start with horror stories. A genre boasting some of the most chilling tales ever penned by man. From its conception in 1794 up to present day, hundreds of authors have been drawn into this dark sub-genre, but why?

In 1764 Horace Walpole wrote what is generally considered to be the first gothic novel, The Castle of Otranto. Though with plot points including gruesome deaths, an ancient prophecy, conspiracy, and much more, it's certainly got horror leanings. But why is this novel considered the first gothic novel? It's generally seen as such because it established what lived on to be the classic gothic tropes, such as: a mysterious foreign location, a spooky castle, a young woman fleeing from danger, as well as evil men.

That said, it was Ann Radcliffe's The Mysteries of Udolpho that took the gothic horror recipe and made it a commercial success. By applying logic to supernatural mystery, Radcliffe rewarded the readers that stuck to the end of her novels, offering creative solutions to what appeared to be otherworldly occurrences.

It's possible that the gothic novel took influence from Romantic literary movements due to its ability to paint terror in an enjoyable way. Gothic, similarly to Romantic literature, can encapsulate the relationships between people and their environment. However, where Romanticism may be more inclined to decorate this relationship, Gothic Horror is able to manipulate the fears and anxieties of man, representing through monsters, or by device, real-world ideas that ail the people.

The Monk landed in 1796, a novel by Matthew Lewis it told the story of a monk who wandered far from the proper path, engaging in all kinds of sin, from necrophilia, voyeurism, cannibalism and more. If you're interested in learning more, read our book review here.

Whereas Radcliffe's novels pushed the idea of women in Gothic Fiction, Lewis' terrifying novel was certainly a male-focused tale. It inherited the genre traits of the Gothic novels that came before it, but then took things to the next level. Lewis' chilling and explicit prose is startling to read, offering the public a truly horrific insight into a dark mind.

The Monk even garnered some minor praise from The Maquis de Sade, who deemed Lewis' work to be superior to Radcliffe's. Though despite this, he was still condemning the Gothic genre as a whole, claiming that it was nothing more than a reaction to movements already taking place around Europe, and the inclination to shock the reader was not as pioneering as some authors made it out to be.

However, it has always been the role of Gothic stories to capture something of the essence of the time. Some of the most prominent early works of the 1800s reflect the fears of the time, be they they hierarchal struggles or the increasing diversity of society. We see this is a slew of early work such as The Vampyre (1816), Frankenstein (1816) and Northanger Abbey (1818). These titles represent the first vampire novel written in English, the introduction of one of horror's most iconic monsters, plus a key satire of the genre.

The 1800s also saw the rise of Edgar Allan Poe, who embarked on his publishing career around 1840. Famous for writing about dark subject matter inspired by his own life, Poe was important for also introducing psychological themes into his work. This proved to be a chilling addition, making his stories seem all the more terrible. Though many of his most recognisable works were penned from 1839, it was The Raven (published in 1845) that brought Poe widespread acclaim. His Gothic stories had an authentic feel, a certain invisible quality that made the reader suspect that the writer really was an authority on the subjects he wrote about.

When Poe's wife died in 1847 so too were the most significant motifs in his work conceived. Often choosing to write of premature death, decomposition and and mourning, it's considered that the loss of Virginia pulled his work from Gothic Horror, closer to Dark Romanticism.

Towards the end of the 1800s some of the most famous Gothic Horror stories were published. Terrifying monster stories such as In A Glass Darkly, The Strange Case of Dr. Jekyll and Mr. Hyde, and Dracula took hold of the public's imagination. Stay tuned to our blog to learn about these supernatural stories and much more with upcoming instalments in our new mini-series Origins of Gothic Fantasy.