Though we see movie posters almost every day, it is often the ones for sci-fi movies that feature the most striking and evocative imagery. The genre has pioneered some of the most recognisable imagery for movies as well as establishing certain genre tropes, making subsequent sci-fi posters look mimetic by comparison.

Movie posters have a rich history of being viewed as impressive artworks in their own right and sci-fi movies are no different. In fact, this genre boasts some of the most inventive posters of all movies - trying look appealing whilst also attempting to convey concepts that are usually developed in the film, be they warring factions in Star Wars, or exotic new worlds to be seen in Forbidden Planet.

We can also track the evolution of styles and techniques from the first sci-fi movies up to present day. From the B-movie charm of retro horror, to the slick photoshop work seen on the Inception poster. Today's blog takes a whistle-stop tour through several eras of science fiction movies, highlighting five of the most significant posters along the way. 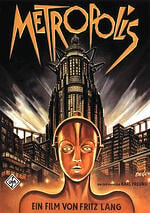 The film poster's futuristic city kickstarted a cinematic love affair with the sci-fi skyscraper, starting a trend that peaked with the posters for  Blade Runner (1982) and Dredd (2012).

Creature from the Black Lagoon (1954) 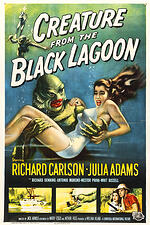 This 50's horror movie get's a place on the list as one of the first posters that created a distinct aesthetic for the monster movies that were popular at the time. Featuring the monster and someone in peril, the title is written in comic-style font - something that was taken further by other movies, maybe having it ripped at the edges or dripping with blood.

Most of these golden era posters were illustrated by Reynold Brown, a comic artist convinced to adapt his trade after an encounter with famous American artist, Norman Rockwell. After becoming the art director at Universal studios he created his seminal poster for Creature from the Black Lagoon, following it with other iconic works for Attack of the 50ft Woman and The Time Machine.

The man responsible for the striking image of Luke Skywalker thrusting his lightsaber into the sky is, Tom Jung. This poster earns a spot on our list simply because of its lasting impact. Still a popular choice for teenager's bedrooms, the image helped Star Wars establish it's visual identity. Though the montage approach wasn't the first ever to be seen on a poster, it's now a motif synonymous with Star Wars posters - something that has remained consistent across every subsequent film release.

(However, an honourable mention goes to the Episode 1 teaser poster. A personal favourite of mine, where a young Anakin Skywalker's shadow casts the silhouette of his future self. Remind yourself of the awesomeness here)

An interesting note about the poster: as it was a pre-production image, keen observers may notice that Luke doesn’t actually look anything like Mark Hamill, nor does Leia resemble like Carrie Fisher. The spaceship design is a little bit off too - all because the film hadn't actually been made yet! Still, it doesn't have seem to hurt public opinion of this quite frankly amazing poster. 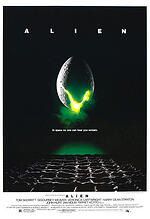 Only two years down the line and we've stopped again. However, we do have a reason this time. Though movie taglines had been around before Alien, Ridley Scott's genre leading sci-fi horror movie wins the prize for best movie tagline ever. Concise and chilling, audiences also get an idea of what to expect. It set the bar for all other movie taglines, a bar many fall short of.

'In space no one can hear you scream.'

Secondly, Alien's minimal imagery precedes a growing trend toward eye-catching, uncomplicated images. By streamlining poster design, production companies realised their movies became more quickly recognisable, instantly reminding audiences of the movie that was playing in theatres. It is this 'recognition factor' that companies have really played on over the last few years, leading neatly into our final poster... 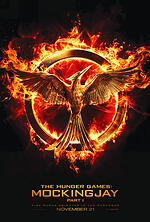 Now, this may be a controversial choice but there is method to the madness. Whilst it may not be the first sci-fi franchise to spring to mind The Hunger Games unarguably takes place in a futuristic, dystopian universe. It makes the top five because it captures two significant elements of contemporary movie posters.

Firstly, it develops the minimalism we just mentioned. However, today franchises reign supreme and what THG does better than any other franchise out there right now, is developing a brand (something made easier for them by the popular book series' designs). The Mockingjay pins are the definitive symbols of the franchise - helping designers not only lean on established images, but also helping them take it to the next level. The Mockingjay features on more than just movie posters - which are created above all things to market, after all - it can be seen on toys, memorabilia, licensed soundtracks and more. Making the movie poster function within a wider marketing exercise that has helped take the film's popularity to stratospheric heights.

A quick note too on 'motion posters': a relatively minor development but an interesting new take on what was previously just a static form of marketing. It is fairly self-explanatory - a poster with motion. In the case of THG this meant have the Mockingjay pin placed front and centre (similar to the image above) but with the fire crackling menacingly. London natives may have also seen this approach during the promotional period for the James Bond film Skyfall, for which the poster showed off a very cool looking Bond walking with purpose toward camera.

For a much more detailed look at sci-fi movie posters and their amazing fantasy art designs, check out our upcoming title Science Fiction Movie Posters: The Fantastic Chronicle of Movie Posters (ISBN: 9781783615940). Full of stunning movie posters for popular and niche sci-fi movies, this is a great gift for a movie lover, or even yourself! You can pre-order it here.

If superhero movies are more you kind of thing, make sure you check out yesterday's blog by clicking here.